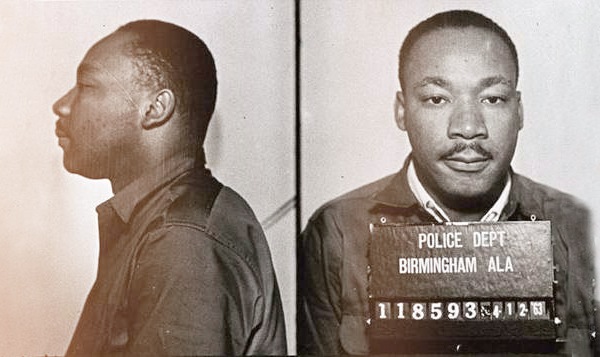 It is Martin Luther King, Jr. Day in the United States today. As the country continues to struggle to eradicate its endemic racism, the words of Dr. King still cut to the heart of the national discourse as they did during his all-too-short lifetime. The time that has passed without the realization of his Dream has only served to amplify what King called "the fierce urgency of now."

In April of 1963, Martin King intentionally violated an anti-protesting ordinance in Birmingham, Alabama, and was jailed on Good Friday. During his incarceration, Dr. King wrote his indelible "Letter From a Birmingham Jail" with a stubby pencil on the margins of a newspaper. He addressed the letter to eight white Alabama pastors who opposed his civil rights protest.

Though addressing circumstances present in the American South of the 1960's, King's letter could just as easily have been written to the white church of today. The Civil Rights Movement of the 1960's is today's Black Lives Matter movement, and King's statement in the letter, "I am in Birmingham because injustice is here," is as timely a clarion call as ever—a call to fight injustice wherever it appears. Below is an excerpt from Martin King's letter—a reminder of what he struggled and died for. -Editor

There was a time when the church was very powerful—in the time when the early Christians rejoiced at being deemed worthy to suffer for what they believed. In those days the church was not merely a thermometer that recorded the ideas and principles of popular opinion; it was a thermostat that transformed the mores of society. Whenever the early Christians entered a town, the people in power became disturbed and immediately sought to convict the Christians for being "disturbers of the peace" and "outside agitators."' But the Christians pressed on, in the conviction that they were "a colony of heaven," called to obey God rather than man. Small in number, they were big in commitment. They were too God-intoxicated to be "astronomically intimidated." By their effort and example they brought an end to such ancient evils as infanticide and gladiatorial contests. Things are different now. So often the contemporary church is a weak, ineffectual voice with an uncertain sound. So often it is an archdefender of the status quo. Far from being disturbed by the presence of the church, the power structure of the average community is consoled by the church's silent—and often even vocal—sanction of things as they are.

But the judgment of God is upon the church as never before. If today's church does not recapture the sacrificial spirit of the early church, it will lose its authenticity, forfeit the loyalty of millions, and be dismissed as an irrelevant social club with no meaning for the twentieth century. Every day I meet young people whose disappointment with the church has turned into outright disgust.

Perhaps I have once again been too optimistic. Is organized religion too inextricably bound to the status quo to save our nation and the world? Perhaps I must turn my faith to the inner spiritual church, the church within the church, as the true ekklesia and the hope of the world. But again I am thankful to God that some noble souls from the ranks of organized religion have broken loose from the paralyzing chains of conformity and joined us as active partners in the struggle for freedom. They have left their secure congregations and walked the streets of Albany, Georgia, with us. They have gone down the highways of the South on tortuous rides for freedom. Yes, they have gone to jail with us. Some have been dismissed from their churches, have lost the support of their bishops and fellow ministers. But they have acted in the faith that right defeated is stronger than evil triumphant. Their witness has been the spiritual salt that has preserved the true meaning of the gospel in these troubled times. They have carved a tunnel of hope through the dark mountain of disappointment. I hope the church as a whole will meet the challenge of this decisive hour. But even if the church does not come to the aid of justice, I have no despair about the future. I have no fear about the outcome of our struggle in Birmingham, even if our motives are at present misunderstood. We will reach the goal of freedom in Birmingham and all over the nation, because the goal of America is freedom. Abused and scorned though we may be, our destiny is tied up with America's destiny. Before the pilgrims landed at Plymouth, we were here. Before the pen of Jefferson etched the majestic words of the Declaration of Independence across the pages of history, we were here. For more than two centuries our forebears labored in this country without wages; they made cotton king; they built the homes of their masters while suffering gross injustice and shameful humiliation—and yet out of a bottomless vitality they continued to thrive and develop. If the inexpressible cruelties of slavery could not stop us, the opposition we now face will surely fail. We will win our freedom because the sacred heritage of our nation and the eternal will of God are embodied in our echoing demands. Before closing I feel impelled to mention one other point in your statement that has troubled me profoundly. You warmly commended the Birmingham police force for keeping "order" and "preventing violence." I doubt that you would have so warmly commended the police force if you had seen its dogs sinking their teeth into unarmed, nonviolent Negroes. I doubt that you would so quickly commend the policemen if you were to observe their ugly and inhumane treatment of Negroes here in the city jail; if you were to watch them push and curse old Negro women and young Negro girls; if you were to see them slap and kick old Negro men and young boys; if you were to observe them, as they did on two occasions, refuse to give us food because we wanted to sing our grace together. I cannot join you in your praise of the Birmingham police department.

It is true that the police have exercised a degree of discipline in handling the demonstrators. In this sense they have conducted themselves rather "nonviolently" in public. But for what purpose? To preserve the evil system of segregation. Over the past few years I have consistently preached that nonviolence demands that the means we use must be as pure as the ends we seek. I have tried to make clear that it is wrong to use immoral means to attain moral ends. But now I must affirm that it is just as wrong, or perhaps even more so, to use moral means to preserve immoral ends. Perhaps Mr. Connor and his policemen have been rather nonviolent in public, as was Chief Pritchett in Albany, Georgia, but they have used the moral means of nonviolence to maintain the immoral end of racial injustice. As T. S. Eliot has said: "The last temptation is the greatest treason: To do the right deed for the wrong reason."

I wish you had commended the Negro sit inners and demonstrators of Birmingham for their sublime courage, their willingness to suffer and their amazing discipline in the midst of great provocation. One day the South will recognize its real heroes. They will be the James Merediths, with the noble sense of purpose that enables them to face jeering and hostile mobs, and with the agonizing loneliness that characterizes the life of the pioneer. They will be old, oppressed, battered Negro women, symbolized in a seventy two year old woman in Montgomery, Alabama, who rose up with a sense of dignity and with her people decided not to ride segregated buses, and who responded with ungrammatical profundity to one who inquired about her weariness: "My feets is tired, but my soul is at rest." They will be the young high school and college students, the young ministers of the gospel and a host of their elders, courageously and nonviolently sitting in at lunch counters and willingly going to jail for conscience' sake. One day the South will know that when these disinherited children of God sat down at lunch counters, they were in reality standing up for what is best in the American dream and for the most sacred values in our Judaeo Christian heritage, thereby bringing our nation back to those great wells of democracy which were dug deep by the founding fathers in their formulation of the Constitution and the Declaration of Independence.

Read the full text of Dr. King's Letter From a Birmingham Jail HERE.