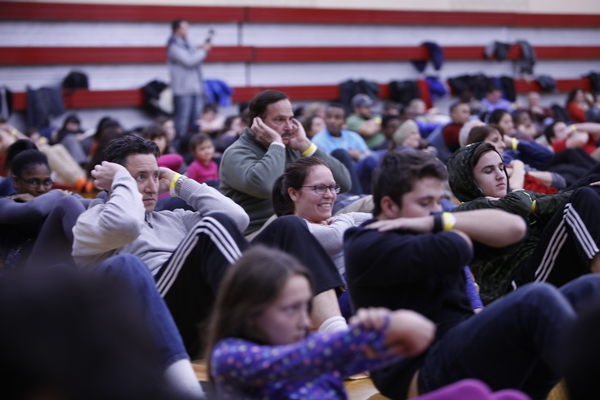 Andrews University Attempts Guinness World Sit-up Record. Wednesday, over 520 participants at Andrews University tried to break the Guinness Book of World Records' one-minute sit-up record. To achieve the record, participants needed to correctly do sit-ups for a full minute. The group's two attempts at the record fell just shy of the record, set by 503 people in England last year. Several participants were disqualified by judges for failing to correctly perform sit-ups for the duration of the two one-minute attempts. University Health & Wellness Director Dominique Wakefield said she wasn't disappointed that they fell short.  "Everyone tried," she said. "The point was to get people out and thinking about fitness."  The event was part of the university's first annual Health & Wellness Fest. From the Herald Palladium, "Short of milestone, but long on fun."

Kenya Adventist Schools To Use Qualification, Not Church Allegiance, in Choosing Staff. Seventh-day Adventist-sponsored schools in the South Kenya Conference will employ teachers and managers based on "ability and professional qualifications as opposed to their allegiance to the church," according to South Kenya Conference Executive Director Julius Bichang'a. The decision resulted from complaints regarding poor education standards and student outcomes on national examinations among learners from Adventist-sponsored schools in that region. From Kisii County News, "SDA sponsored schools to be run by professionals - director."

Placer County Adventist Pastor Ministers at Funeral for Homeless Woman. Dan Appel, pastor of the Auburn, California, Seventh-day Adventist Church, provided comfort and care to 60 mourners at the Grange hall funeral of a homeless, drug-addicted woman to whom he had ministered. He assured them that her suicide was not a sin.  “You’ll never find that in the Bible,” he said. “There’s always a better choice, but I know that God loves her, just as he loves all of you."  She had stopped using drugs for about 16 months then relapsed. From Auburn Journal, "Homeless community pays respects."

Norway Church Provides Bibles to Syrian Refugees. The Vadso Seventh-day Adventist Church in Norway partnered with the Norwegian Bible Society to distribute Bibles in both Arabic and Farsi to Syrian refugees who recently immigrated. Elias Samer Nema, a refugee who arrived in Norway last year, started attending the Vadso church and wanted to tell other refugees about Jesus and help them to get Bibles. He was aided by local elder Hilde Huru. The church has also given the refugees smartphones to help them communicate through Google Translate. From Christianity Today, "Norwegian church shares gospel with refugees through Google Translate and Bibles."