Perspective: Can History Be Hopeful? 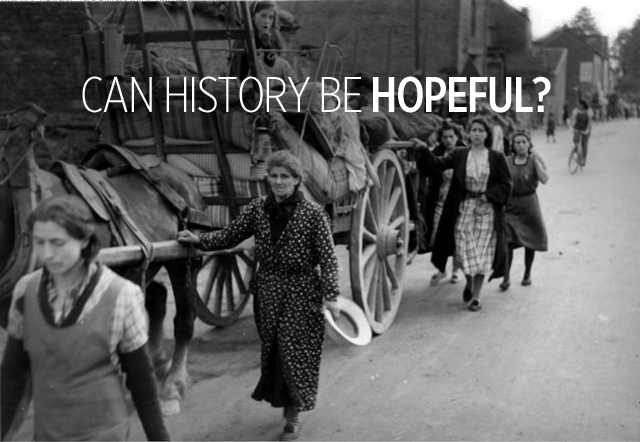 Ta-Nehisi Coates, author of the highly-acclaimed exploration of American race relations, Between the World and Me, doesn’t find hope in history. In fact, said Coates in a December essay for the Atlantic, “a writer wedded to ‘hope’ is ultimately divorced from ‘truth.’” Such a writer’s commitment is to “the ahistorical, to the mythical, to the hagiography of humanity,” not history.

The essay provoked a great deal of comment, raising profound questions of obvious centrality for Christian historians (and for the blogging experiment that I’ve titled History and Hope). Is “history and hope” a contradiction in terms? Should an enterprise that links the two continue in the world of 2016?

Coates indeed hits the bulls-eye in targeting “triumphalist narratives about US history,” as Peter Wirzbicki puts it in his response to Coates’ essay. Yes, exploitation and injustice have marred the American past, such narratives acknowledge, but the nation’s enlightened ideals have prevailed – the really bad stuff is way behind us now. Such storylines make it easy to dismiss the seriousness of current iterations of racism and oppression. The need for continued improvement may be acknowledged, but the assumption they underwrite is that decent, democratic, progressing America cannot be fundamentally flawed.

Coates is also right that the “practice of history” doesn’t allow for a commitment to writing hopeful things. “Historians are not cheerleaders,” I heard the great historian Arthur Mann say when I was doing graduate work at the University of Chicago, and I haven’t forgotten it.

Ta-Nehisi Coates and his acclaimed "Between the World and Me."

Yet, as Wirzbicki points out, if history is, on the hand, “one long march of oppressions” it “is also the study of the glorious moments—revolutions, social movements, elections—in which everyday people chipped away at the tremendous injustices that surrounded them.”

So, it is no soft-headed lack of rigor to point to the power of hope in galvanizing social change. Yes, dreams about the reign of enlightened progress have been repeatedly sabotaged by the persistence of human pride and the drive to write it large in empire – and that made all the more pernicious for its adaptation to new conditions. Yet, it has also been demonstrated over and over that the long moral arc of the universe keeps exerting its pull toward justice and that suppressed truth cannot be stopped from rising again.

Historians of Christianity may note how Christian hope has moved people to take on the powers that be against all pragmatic hope of success.

How often those who trusted the word of God, though in themselves utterly helpless, have withstood the power of the whole world . . . The Vaudois and the Huguenots, Wycliffe and Huss, Jerome and Luther, Tyndale and Knox, Zinzendorf and Wesley, with multitudes of others, have witnessed to the power of God’s word against human power and policy in support of evil. These are the world’s true nobility. This is its royal line" (Ellen G. White, Education, 254).

Moreover, hope (not to be confused with optimism about American progress) unavoidably influences how historians who are Christian select topics, gather evidence, synthesize it, and shape stories out of the unmanageable mountain of information about the past. More personally, my outlook both as a historian of Adventism and a Seventh-day Adventist historian orients me towards crafting evidence-based stories that bring to light both the best in the movement’s heritage as well as its limitations and the failures of those who have identified with it to live up to its highest ideals.

Hope as conviction doesn’t commit me to writing only hopeful stories or to triumphalist narratives about any organization—ecclesiastical or otherwise. But it does orient my perspective. Non-hope as conviction would do the same. Historian Chris Gehrz brings this out by reversing Coates’ language (the emphasized words are from Gehrz):

“I think that a writer wedded to the absence of hope is ultimately divorced from ‘truth.’ Two creeds can’t occupy the same place at the same time. If your writing must not be hopeful, then there’s only room for the kind of evidence which verifies your premise.”

One of the beauties of the historical discipline is that it enables people of varying persuasions about hope and faith to talk each other in the same language. When we acknowledge the particularity of our perspectives, base our claims about the past on evidence accessible to all, and use the evidence as fairly as possible, the reading and writing of history mutually checks the distortions to which our commitments might incline us. And that’s just one way that the process can make us wiser, more humane, and—on the part of those committed to the Jesus movement—more faithful.

So, even though the prospects for 2016 may seem even less encouraging than usual, I enter it with hope about history, in two senses of the word. The gospel makes me hopeful about history as the trajectory of the entire human experience. And, I’m hopeful about history as a discipline—about how the process of crafting, experiencing, and discussing narratives about the past can both express and sharpen our witness to truth.

Douglas Morgan is professor of History and Political Studies at Washington Adventist University. He writes at www.historyandhope.org.