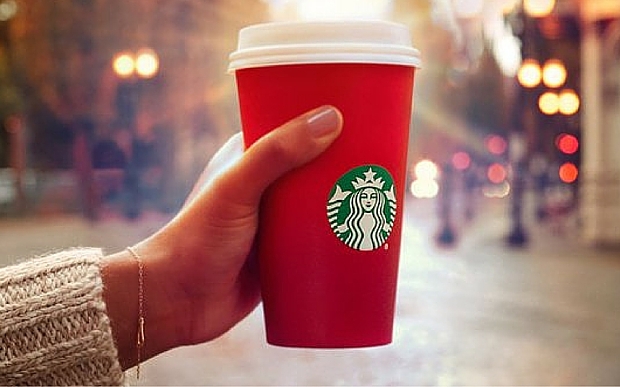 But in Bethlehem’s home was there found no room
For Thy holy nativity.
O come to my heart, Lord Jesus,
There is room in my heart for Thee.

The slogan has been around for a few decades but its execution has been mixed. This fall frenzied Christians shouted it with new fervor when Starbucks chose a red cup for seasonal use that did not have overt Christian verbiage or symbol. Maybe Christians should instead adopt Joshua Harding’s slogan that, I believe, more truthfully addresses the issue at hand; that is: “Keep Christ in Christians.”

Last month, one prominent study contended that children with religious upbringing were less altruistic than children reared in secular homes. Though some dispute the methodology which yielded that conclusion, many believers will agree that it is high time we should reflect on the state of the church, how its teachings impact our daily lives, and how it interacts within broader society.

Despite centuries of being a force for good in both personal and societal maturity (development of hospitals, respect for victims and more), there is little disagreement that Christianity currently has an image problem. The solutions are not particularly easy and in order to be faithful to the Christ, any solution that emphasizes marketing or window dressing rather than a deeper change would cheapen the gospel.

Could the lack of room for Jesus in Bethlehem be an apt metaphor of our own hearts? Are Christians in a similar situation as the iconic innkeeper? Have we crowded Christ out of Christianity?

How do we then, “Keep Christ in Christians.” Maybe a place to start is to consider the prevalence of four idols amongst Christians as well as contemplate how we might free up the space that should be reserved for Jesus.

Busyness. It is fashionable to boast about one’s busyness. How often we say and hear:

Never has a society left less space for contemplation than what we do right now. Multi-tasking, keeping up with social media, responding to multiple tracks of communication offered by messaging, text, email, snapchats. Our current lifestyle tends to make us reactive rather than responsive and intentional.

Counterpoint: Spend time outside. Observe nature. Watch other people. Take time to reflect. Read a scripture and contemplate it for several minutes with plans to review it throughout the day. Reserve regular times to simply listen to good music or gaze at great artwork. Get a coloring book and use it.

Politics. A Buddhist proverb states, “Saints and sages have always known that politics is bad for the soul.” While necessary in an interconnected world, it is not particularly helpful for Christians to have an obsession with politics. Few things have done more damage to our national conversation than continuous cable news. Rather than using the increased time available to develop greater and deeper understanding, the news outlets have instead yielded partisan hacks who have developed poisonous attitudes toward the other and the gulf between the citizenry is widening daily. Unfortunately, the advocacy for so-called Christian values is a significant factor in the estrangement among the electorate. One can be a responsible citizen without falling into this quagmire of partisan rhetoric which seems to require categorization of individuals and groups into who is good and who is bad; who is in and who is out; who is smart and who is stupid.

God requires humility amongst believers and humility entails admitting the reality that we know only in part. No one group has the comprehensive understanding of reality and the ultimate cure to the world’s problems. When we firmly attach ourselves to one political party while holding pure contempt for the other, we are falling off the pathway advocated by Paul and other early Christians.

Counterpoint: Limit exposure to partisan rhetoric by curtailing the time spent listening to talk radio or cable news. Truly listen to an eclectic menu of sources to learn about the current events. Develop an empathy and an understanding for why each side would advocate their position. Focus on proper citizenship in God’s kingdom, instead of citizenship in a particular country. Remember that we were created for diversity and that no one group has the entire truth. For those who live in the US, consider scheduling a few weeks of time as a respite from the accelerating toxicity in the months prior to the presidential election.

Wrath. We live in the age of rage, where an angry rant has become an art form. Conservatives have self-righteous conservative anger. Liberals have self-righteous liberal anger. Often this anger is a reaction from a position of victimhood. References to Jesus’ wrath in clearing the temple offer no conceptual validation for a Christian’s anger. We are not Jesus. References to the prophetic wrath in the Old Testament cannot justify one’s wrath. We are not prophets.

James says that human wrath does not bring about God’s diakones. Human anger has no place in God’s mission to set the world aright. Because Jesus is Lord, believers can afford to be gentle. Jesus was crucified and resurrected. That is the victory.

Counterpoint: Focus on an identity that is solely in Christ. In Christ, we are not victims. A victim identity nourishes shame, guilt, or rage. The admonition to forgive one’s enemies is for one’s own good. Believing a manifest destiny pushes one’s psyche into an angry conquest that will obliterate any hope of viewing our neighbor through Christ’s eyes with a wholehearted love. Rather, let us follow the apostles’ model of choosing to focus on commonalities rather than differences.

When we believe that we have a right to be angry, the natural consequences are antithetical to Christ. Croatian theologian Miroslav Volf states, “Forgiveness flounders because I exclude the enemy from the community of humans and myself from the community of sinners.” Concentrate on the self-sacrificial character of God, and be transformed.

Greed. Currently, consumerism is the golden cow – not golden calf – golden cow. Ironically, this sin has crept into Christmas, with many blindly participating in the charade. While Christians boldly claim the right to keep “Christ in Christmas,” many are unwittingly blind to this stealthy counterfeit that has pushed any semblance of Christ out. Advertising, the inescapable fluid that primes the pump of greed, is based on a wholly unholy mimetic rivalry.

“I must own what someone else has.”
“I want to eat, travel, use a certain potion or participate in a particular group, then I will be happy.”

Bob Dylan said, “Money doesn’t talk, it swears.” Jesus said, “No man can serve two masters.” Societal greed has quietly entered the corridors of our faith communities via false pictures of what God is meant to do and be. Volf’s thoughts are again helpful in understanding how we have inadvertently turned God into a commodity:

“Two false images of God are particularly irresistible to many of us – mostly unconsciously. The first I’ll designate as God the negotiator and the other, God the Santa Claus. Though we have fashioned both to serve our interests, they are each other’s opposites. With one, we want to make advantageous deals. From the other, we want to get warm smiles and bagfuls of goodies. We run from one to the other. Some of their features are reminiscent of the God of Jesus Christ. But we’ve drawn these images of God mostly from two currents of the culture in which we swim – the current of hard and unforgiving economic realities, in which we exchange goods to maximize benefits, and the current of soft, even infantile, desires, in which we long to be showered with gifts simply because we exist.”1

When we fearlessly make room for Christ in our hearts, we can remember Paul’s words. Light is greater than darkness. We are not conquerors. We are MORE than conquerors. Emmanuel did not come to Earth to simply provide an escape mechanism to a new world. Nor, did He come to replace or supersede the law and the prophets. Jesus came to show that Light is greater than darkness. He is the full expression of God. The crystallization of how God wants us to live now.

Now is the time for a conversion. Not a superficial repentance that we think will fulfill part of a mathematical equation, assuring us of an afterlife. Let us instead convert to follow the Christ of Christians. The time is ripe for Christian believers to exit their rooms that have been carefully constructed by a selective reading of scripture, and recognize that their shallow rendering of scripture is hurting their witness. The time is ripe to align with the expansive vision put forward in all scripture. It is high time to cooperate with God, partaking in a fully collaborative eschatology.

Joy to the world, the Lord is come:
Let earth receive her King!
Let ev’ry heart prepare Him room