The Birth of a Sacrifice 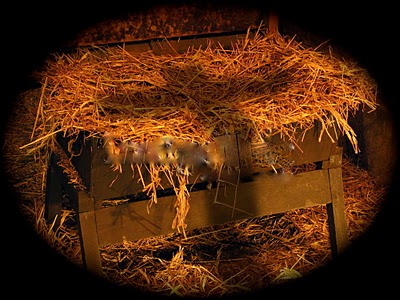 While these questions are not necessarily parallel I would like to treat them as such. The idea that Jesus was born during the Christmas season is a fairy tale usually believed only by children. In my mind’s eye I still can envision the crèches I saw in my childhood, with Joseph, Mary, and the baby Jesus surrounded by animals, with a fresh bed of snow on the ground. As we get older we come to understand that the Christmas season is the time designated to commemorate the birth of Christ, not an actual statement of historical accuracy. Despite this, critics of the holiday, both Christian and otherwise, highlight the time of the celebration as factually inaccurate in order to bolster arguments against Christmas. Some of this criticism could be alleviated if we spent more time focusing on just who came on Christmas. I would like us to return to Jesus as the reason for the season, but not in a way that relegates him to the cliché I just quoted. Instead, the focus should be on the two elements of Christ that I think can have mass appeal. For those of us who are spiritually inclined, the idea of Christ as the Son of God and a part of God Himself is the most important element of the holiday. I have always loved Paul’s statement in Philippians on this subject – “[Jesus] who, although He existed in the form of God, did not regard equality with God a thing to begrasped, butemptied Himself, taking the form of a bond-servant, and being made in the likeness of men.”[1]Look what Jesus gave up in order to live amongst us. Who is this Being who would do such a thing? The answer is someone that anyone could follow, regardless of whether they believe in the divinity of Christ. Jesus is someone whose life and teachings exist in perfect balance. He is the traditional progressive.Focused on self-betterment while also extremely compassionate and empathetic. Filled with love, mercy, and grace while also filled with a sense of purpose and responsibility. In Jesus we find not only Someone who we can all relate to, but also Someone who challenges us to be better than we are.

Christmas, when we do focus on the who, is filled with retellings of his miraculous birth. And rightly so. However, unless Jesus’ existence is a fait accompli, why Jesus came is much more important story to tell then the particular circumstances that brought him here. I would like to believe that Jesus could’ve made a mistake and just didn’t – if that’s not true than His is an example that no one can follow. As such, His birth is the first step of many in accomplishing what appears to me to be a twofold goal. First, to show humanity how to live and second, to sacrifice Himself in order to make that living possible. Once again Paul’s statement in Philippians is instructive – “Being found in appearance as a man, He humbled Himself by becoming obedient to the point of death, even death on a cross.” The humility and the obedience that Jesus showed is the reason why He came, and His death allows me to model that humility and obedience in my own life through His help. Christmas does not mean anything without that.

I will admit – I see Christmas through new eyes this year, having just become a parent, despite the fact that my child is too young to ever remember this particular holiday. But having family visit and opening my daughter’s presents under the tree takes on a particularly different and special meaning for me this year. However, I hope that the joy that we will share in the trappings of Christmas will never detract from the who and the why that makes all that joy not only meaningful, but possible.