Even at the Door? President Ted Wilson, in his inaugural sermon in Atlanta/2010, said the following:

"Signs of Christ’s coming are increasing in frequency and intensity every day. Destructive events in nature, the great confusion of world politics, the pervasive and compromising activities of ecumenism, the dramatic increase and influence of spiritualism, the deterioration of world economies, the disintegration of societal and family values, the disbelief in the absolute authority of God’s Holy Word and the ten commandments, rampant crime and moral decay, wars and rumors of war, on and on. All point unmistakably to the climax of earth’s history and the Lord’s return to take us on the final journey home to heaven."

Five years later, in his San Antonio post-re-election sermon, he made essentially the same points:

"I am more convinced than ever that Jesus’ return is near, even at the door! … We know the signs of Matthew 24 and realize political challenges are now beyond the control of most governments today, economic conditions are fragile and untrustworthy, natural disasters are increasing in intensity and destruction, social changes are challenging the very Word of God, ecumenism is rapidly growing in its false, non-biblical and neutralizing influence on society and yet we are still here."

These ideas are familiar and core Adventist belief since the church began, post 1844. And, as the most visible and representative spokesperson of Adventist belief, Wilson’s statements are unsurprising, even expected. But they are problematic.

1)      They are framed as a possibly circular argument. That is, he says that because of: destructive nature, political confusion, economic deterioration, etc., therefore: the 2nd Coming is at the door. However, no justification for these premises is given. And one would not expect that in the context of a sermon. But much more central is the reality that justification for these presumed causes is never really explored substantively within Adventism. They are just assumed to be true – because of longstanding Biblical and Ellen White interpretations. Then stated and re-stated because this general argument has always been a part of Adventism.

But the correctness of all these premises is not obvious to those not already persuaded. Each of Wilson’s stated premises (e.g. moral decay, war), need to have been initially conclusions, supported by their own unique, specific rationale. And those arguments, I assert, are frequently in the implicit form of: because we know the Advent is very near [premise], we expect: increasing social, economic, political and religious unrest [conclusion]. But what this two step process then amounts to is a circular argument. Thus validation of the “signs of the times” is often because of faith in the Adventist position that Jesus’ coming is “even at the door”. Then those now presumably valid signs become premises to generate the conclusion that “All point unmistakably to the climax of earth’s history and the Lord’s return”.

2)       Unsupportive data. Are Wilson’s premises [disaster, politics, economy etc.] defensible on grounds other than belief that they must be true because we are at the end of time? If so the circularity charge can be removed. That is, if Wilson is asserting “end-ness” based on a faith-position alone, his above-quoted statements – if considered by the listener as an argument – are circular. However, if grounded by evidence, they are not. Thus much depends on this. But the evidence is problematic.

While a robust examination of what events and/or metrics God has in mind as tipping points to the 2nd Coming would be most welcome, that would far exceed my space limitation. Instead I will consider here a small sample of at least plausible data.

If the world is getting worse, let alone “unmistakably” at the end of time, one might expect the life situation of a world citizen to be also getting worse – on average. Yet consider: 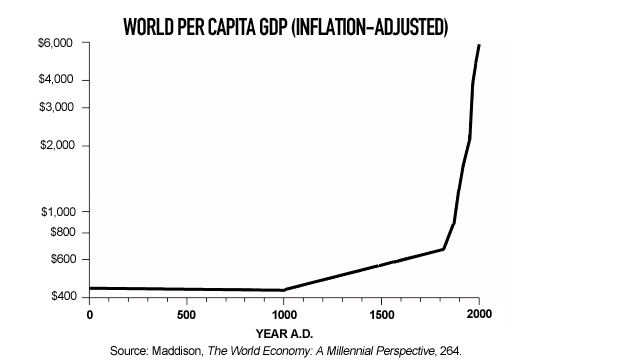 This graph shows real (not nominal) Gross Domestic Product since A.D. zero. Note the dramatic increase in productivity, notably for the past 150 years. And average individual prosperity correlates to this dramatic increase. Especially in the past 30 years. Places like China and India have seen an astonishing rise in the middle class, and overall economic gain, as shown here:

(Apologies for the small size. The website restricts the size of uploaded images.)

Along with more per capita income one might expect to see an improved living standard translate into better health. It is undeniable that there has been an explosion of medical knowledge in the past 150 years. And, indeed: 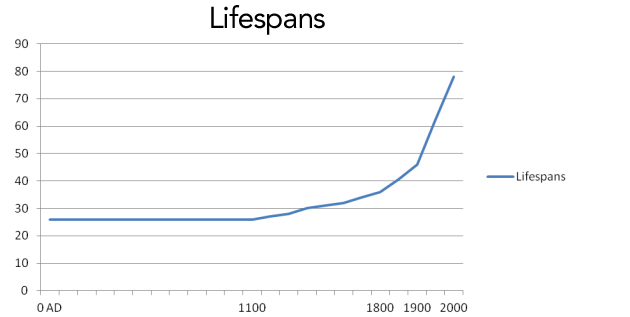 The worldwide GDP curve (1st graph, above) looks quite similar to the increase in an individual’s lifespan, which ought to suggest better average overall health. These metrics obviously make one wonder whether a persuasive case can be made that the world is instead actually getting better, not worse. 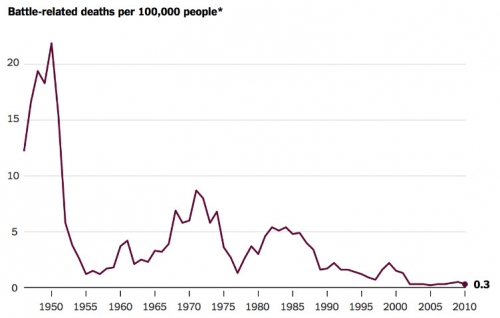 There are spikes correlating to the Korean and Vietnam War timeframes. Perhaps the 1980’s rise is due in part to the Cambodian genocide. But the dramatic downward trend is obvious.

Each of the graphs show shifts which have occurred during the timeframe that Adventism has presented the warning that Elder Wilson articulates above. But the directions seem to be at odds with the expected Adventist conclusion.

Some other end-time categories/events mentioned by Wilson are also commonly considered significant within the Adventist community, including:

-        Economic deterioration. There was, of course, the recent 2008 “melt down”. That must be solid evidence, right? Except that I doubt very much whether those typically propounding this opinion have done any macro economic analysis. It is just “bad” and “scary” and on the news a lot. Digging into the actual underlying issues[1] would not produce anything as simplistic as the person-in-the-pew is likely to have in mind when forming an opinion about economic risk.[2]

-        Religious liberty. But, at least in America, the so-called “Religious Right” has (arguably) less clout than in the former, Jerry Falwell / Pat Robertson days.  And Christianity overall is in decline[3] in the U.S. Consider[4]: This disturbing trend seems at odds with the Great Commission being fulfilled any time soon.

-        The Catholic Church.  But Francis is not making many obvious beastly pronouncements these days. Would his words be suspect to Adventists if he were not pope? We risk circularity again here. If whatever the pope says gets interpreted in a way that “confirms” an Adventist view of Catholicism’s eschatological role, then those interpretations can morph into “evidence” that the end is near.

-        Natural disasters. We have more people these days and better reporting mechanisms. But, for example, has modernity had anything comparable in physical size/scope to the Krakatoa eruption[5] in 1883? Or the Tambora eruption[6] of 1816 resulting in the “year without a summer”?

What reactions might there be, among Adventists, to what I’ve presented here? There are many possibilities, including but certainly not limited to:

1.       Believing I have bad motives for casting doubt on the traditional Adventist assertion that we are in the “last days”. I would deny this but, far more importantly, motives are irrelevant, and to shift discussion from what the possible end-time indicators might be, to the character of anyone who raises questions – is an example of ad hominem. Still, this is a frequent reaction people have when an important, but perhaps under-examined belief is questioned.

2.       I am cherry-picking data. Are there are different data out there that, had they been presented, would corroborate President Wilson’s assertions? To this question/possibility I would say – make the case. Provide the additional conflicting data and let’s all begin the investigative process.

3.       I have chosen wrong or at least incomplete metrics. Again, I would welcome any responsible exposition of this possibility. It brings into view the broader, yet even more important and problematic, question of just what is God waiting for?

4.       President Wilson is speaking purely on a faith basis, sans analysis, and perhaps premature in his estimation of where we are in time. This to me is the most plausible, because the data I’ve shown above can be considered damaging to his conclusion and somewhat persuasive toward the opposite view, at least in absence of any other metrics and plausible scenarios.

My intent in this brief essay is not to disprove anything. Certainly not that the 2nd Coming doctrine is false, or even that it is necessarily not in the near future. My goal is much more modest. Adventists have been making assertions about being in the last days for a very long time. We usually have anecdotal evidence in mind to buttress the belief. And likely a loose and shifting set of categories that we deem significant end-time markers.

I am suggesting a possible disconnect between some of our end-time assertions and reality on the ground. If the economy, religious liberty, Catholicism – or anything else – is relevant, we should try to think this whole subject through and propose rationale that correlates with the data. We should not go from GC to GC saying the same thing without supporting our assertions. The only ones willing to accept this would be those who already uncritically believe and are sufficiently invested in that belief (for a wide variety of sometimes problematic reasons) to find any scrutiny unwelcome. Thus a circular argument suffices. But if we hope to be honest with ourselves and persuasive to potential converts – we have to do better than this.

[1] Start with readable books like “Too Big to Fail” and “The Big Short”. Then consider books like Ben Bernanke’s “The Federal Reserve and the Financial Crisis”.

[2] The economic system is enormously complicated so it is folly to suggest collapse ought to be ruled out. However, regarding the recent crisis I’ve examined the root causes personally at some depth (including the above-mentioned books) and it is difficult for me to envision collapse. The people most impacted are rich and/or powerful and whose vested interests in maintaining economic functioning or fixing any breakage – are enormous. They have the resources and power to make movements to repair the mechanisms, though perhaps suboptimally and under duress (e.g. TARP). Their entire fortunes and power-positions depend on it. This motivation and capability is IMO a considerable counter-weight to the free-floating belief that economic complexity has gotten so out-of-hand that collapse is nearly inevitable.

[6] See: https://en.wikipedia.org/wiki/1815_eruption_of_Mount_Tambora or the book “Tambora: The Eruption That Changed the World”