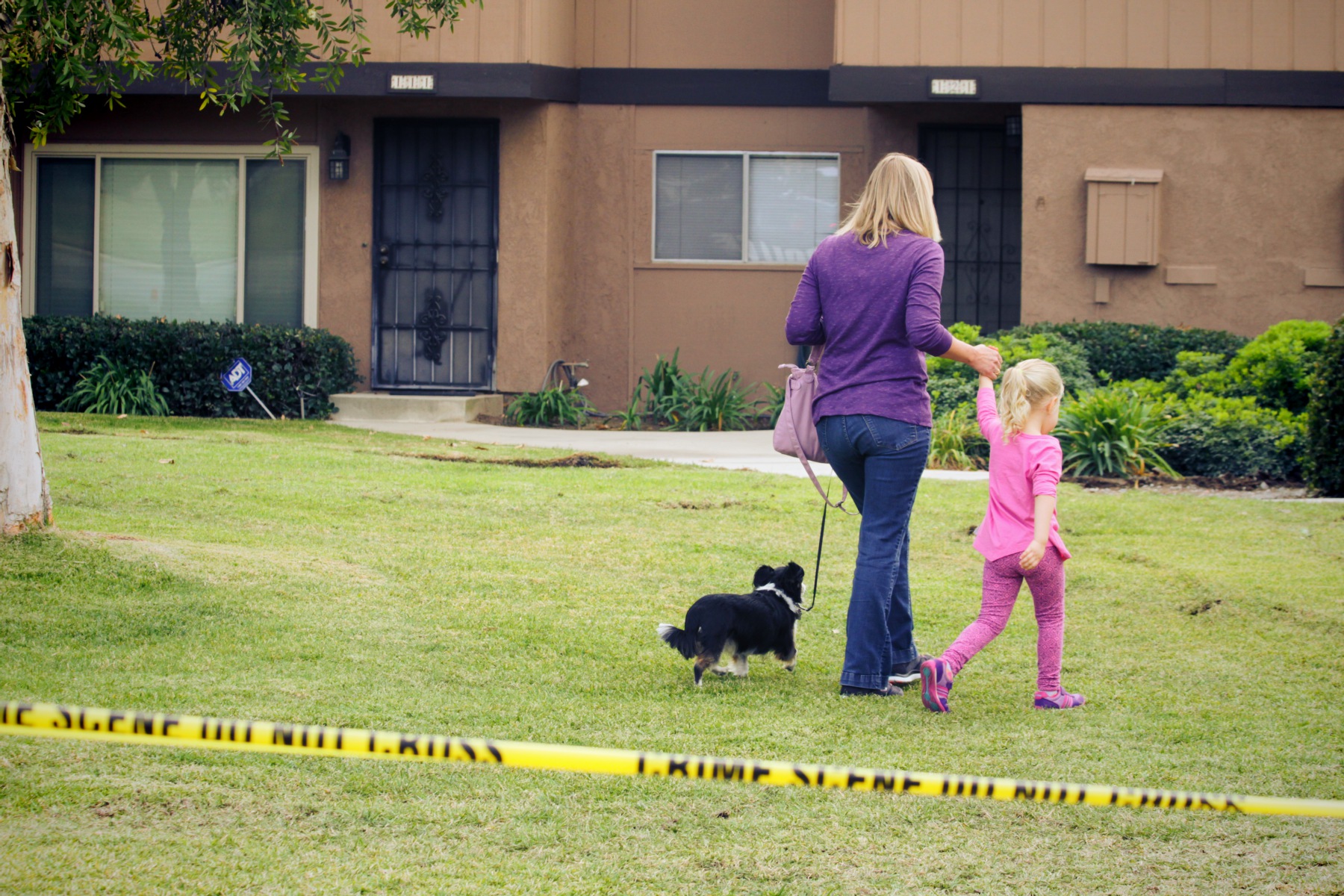 In the two days since Syed Rizwan Farook and Tashfeen Malik shot and killed fourteen people and injured 21 others at the Inland Regional Center in San Bernardino, California, Seventh-day Adventist communities in neighboring Loma Linda and Redlands have been talking about little else.

I spoke with several people who live and work in and around Loma Linda, which borders San Bernardino, to hear their first-hand accounts of the day of violence that made headlines around the world.

Wesley Harrington, a physician’s assistant at Loma Linda University Medical Center (LLUMC), arrived at work at 7am Wednesday morning. He described the morning as business as usual.

Harrington, a graduate of Loma Linda University who has worked at the hospital for two years, said that it is not uncommon to hear overhead intercom calls for available staff to come to the front of the emergency room. So when the first calls for help came over the speakers Wednesday, he sensed nothing amiss.

“They called a couple of times for any available nurses,” Harrington said.

Then calls came for any available staff. This was unusual. Harrington said that at least 5 to 6 times the normal amount of staff, including nurses and attending physicians from ICU, acute care, and surgery departments convened in the emergency room. Harrington, who was among the workers on hand, said he had never seen anything of this magnitude.

Harrington said the emergency room command center located in nursing administration receives information from police scanners. “We were getting 5-10 minute updates about the situation,” he said. “Spotty information that was trickling in...mass shooting, rumors of lots of people coming in.” They expected a huge influx of patients.

Emergency room staff formed an assembly line with some physicians out in parking lot. San Bernardino County Police and Sheriff’s Department personnel screened all those coming into the ER. Inside the ER, Harrington said that staff formed a human tunnel to receive those who might be transported in. There were gurneys at the ready with at least one attending physician and several nurses at the ready for each. The blood bank director was on hand, and the operating room was called upon to clear out as far as possible to free up beds, bracing for the worst.

As the only Level 1 trauma center in the region, Loma Linda received the most critical of the patients—five in all—from the shooting. Harrington said that the first patients to arrive were triaged in a matter of a few minutes, and were then transported to the appropriate locales within the hospital for treatment and care. Some lower acuity patients were taken to other area hospitals instead of Loma Linda.

After an initial burst of activity, there was a lull in the activity, during which some of the personnel dispersed from the emergency room.

At around 12:00pm, a Code Yellow bomb threat was announced, lasting until approximately 3:30pm. The director for nursing administration alerted personnel of the bomb threat, telling all to keep their eyes open for strange packages or anything suspicious. Otherwise they were to keep on doing their jobs.

Later, a Code Silver was also reported indicating a possible gunman in the building. It was less sensationalized, Harrington said, and lasted less time than the Code Yellow. Some personnel, understandably didn’t want to be there and wanted to go home, Harrington said.

At approximately 3:10pm, from where I was positioned with media outside the LLUMC ER, I saw several law enforcement officers who had been manning a security perimeter in front of the ER run to unmarked vehicles with weapons drawn and speed away northbound toward San Bernardino. We learned a few moments later that police were engaged in a firefight with suspects.

About 20 minutes after the police left the ER, an ambulance with lights and siren engaged came speeding to the ER from the direction of the shootout. While hospital spokespersons would not confirm that the patient was law enforcement, there were confirmed reports that an officer was shot in the gun battle with suspects. When the ambulance arrived, medical personnel surrounded the ambulance, holding up sheets to prevent the occupant from being identified by media.

While all of this had been going on, a search for suspects led authorities to a neighborhood in nearby Redlands.

Jeffrey Keough, a construction worker living in the neighborhood, had been cleaning out his garage that faced an alleyway. He had transported several loads to a nearby dump, making trips in and out of the alley with several hired workers. Keough was unaware of the violence that had erupted one town over, and of the ensuing manhunt in his neighborhood. In early afternoon, he received a phone call from his father Alger Keough, a pastor at the Azure Hills Seventh-day Adventist Church, warning of active shooter around Waterman/Hospitality Lane. Keough went inside and turned on his television.

Not long after, he heard a faint knock at the door. He almost ignored it, but went to see who was there. He noticed a Redlands Police car parked nearby. Upon opening the door, at first he saw no one. Then a police officer came into view from a position in the yard. The officer said a neighbor had reported suspicious behavior, giving a description of Keough’s truck. The officer asked to see his ID, and ran it through a background check. After determining that Keough did not pose a threat, he left the house. Keough said that he saw the officer’s squad car several more times, patrolling the neighborhood. Later, while watching the evening news, Keough saw the squad car again at a street just a few blocks away. The home was that of the suspects, which was later revealed to be full of ammunition and bomb-making devices.

While Keough was being questioned by police, his daughter Caroline, who attends Loma Linda Academy, was under modified lockdown. Parents received notifications from the Academy via text message and email.

Redlands Adventist Academy, which turned out to be only blocks away from the two shooters’ Redlands residence, also implemented a voluntary modified lockdown on Wednesday, and canceled classes on Thursday.

I spoke with eight-year-old Caroline, who said that it was her P.E. teacher, Mr. Steve, who informed her third grade class that they couldn’t go out because there was a shooting. Loma Linda Academy implemented a voluntary lockdown, keeping students inside classrooms, and ending school about 30 minutes early on Wednesday.

Caroline said that she didn’t feel afraid at the time. “I was just thinking that I was safe at school,” she said.

John Carter, director of bands and chair of the music department at Loma Linda Academy wrote about his account on Facebook. His post quickly went viral, and has been shared more 800 times since it was posted. Carter said in the post,

“I had a lot of anxious junior high band students in class this afternoon. There was nervous chatter and some tears. Several of the students were too afraid to even go outside. So I cancelled rehearsal and instead spent the period talking about what courage means. And right after class their courage was tested; I walked them all back to their Junior High homerooms just as dozens of police cars raced past campus, helicopters were circling above, and additional lockdown procedures were being put in place by administration. I found out later that the Jr. High dismissal bell rang precisely when the shootout with the black SUV occurred less than two miles away.

Folks, at times like this it is important to keep your children calm and assured. Yes, events like this are terrifying. Yes, this was very close to home. But children respond to how we respond. Show them what courage looks like. It is okay to feel afraid. You cannot have courage without fear. But if we allow fear to overwhelm us, we diminish the light of hope.”

Cherry Werner Ashlock, who substitutes at Loma Linda Academy and volunteers at Loma Linda University Medical Center, also lives in the Redlands neighborhood near the apartment the two shooters occupied.

“Living in the community where it’s happening is kind of unreal,” Ashlock told me. “It’s real because you see all this stuff on TV but it just feels like it shouldn’t be happening.”

Ashlock drove past the suspects’ house around the time that a bizarre event unfolded. She said she saw news vans on the street, and in front of the house, there were many people standing around. “There were no police and no tape visible,” she said. She described the scene as “very orderly, people just standing there talking.” But what was going on was anything but.

With news cameras rolling, the landlord who rented the residence to Farook and Malik, used a crowbar to pry boards off the door placed by law enforcement, and the assembled media flooded inside, photographing the contents of the small residence.

“People were going by at a crawl,” Ashlock said. “People were parking and then walking back. I saw an elderly couple that just wanted to get a look.”

Ashlock told me that for several nights she has heard the drone of helicopters hovering over her usually quiet neighborhood. “I was like, ‘What on earth are they taping all night?’”

She has driven up and down the street where the suspects lived for years, “and it’s just kind of weird that no one was aware, not even their relatives,” she said.

Ashlock said that everywhere she goes in Redlands and Loma Linda, people are still talking about the incident and debriefing. “Everyone is still discussing it: ‘Where were you? Were you at the hospital?’”

As I finish this article, I’m preparing to go to a prayer vigil at the Azure Hills Church in Grand Terrace, situated adjacent to the cities of Loma Linda and San Bernardino. Pastors there have planned a service to help the communities process the complex emotions that accompany an act now being investigated as an act of terrorism.

These Southland communities will continue to struggle to come to terms with this act of violence that has hit not just close to home; for those named in this story—and for my own family, this is home.