While there are several women serving as pastors in the Southern African Union Conference (SAU), Swartz became the sole woman pastor in all three of the divisions on the African continent to be commissioned. SAU Ministerial Association Secretary Gerald T. Du Preez, who presided over Saturday’s proceedings, noted that at the last SAU Executive Committee Meeting, the name of a second woman ministerial candidate was approved for commissioning--that of Nandi Fleming. 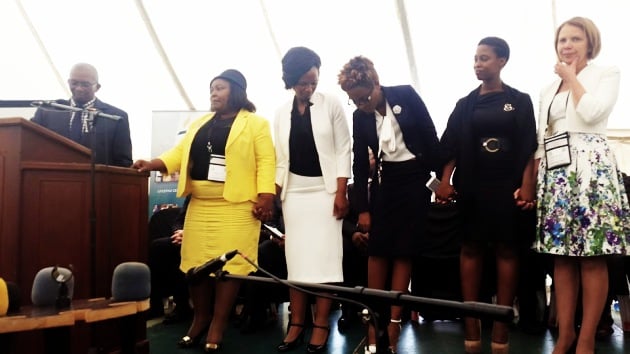 The South Africa Union Conference has emerged as the African leader in advancing women ministers. In November 2014, before the San Antonio General Conference Session vote on ordination, the SAU Executive Committee voted the following statement as its official position on women’s ordination:

FURTHER that the implementation of this action is subject to the outcome of the 2015 GC Business Session.

Following the General Conference Session in San Antonio, the SAU Executive Committee noted the decision of the Church and stated that it would abide by that decision. The union adopted the following policy concerning women:

L 20 30 10 - The Seventh-day Adventist Church appoints women to serve as pastors in the gospel ministry. They are authorized to perform all the ministerial functions as their male counterparts at the different levels of ministry, which are internship, licensed and commissioned.

With Saturday’s service, Swartz becomes the forerunner of SAU policy, and it happened in as large and public a venue as possible. Southern Africa Union Conference president, Dr. Tankiso Letseli delivered the sermon with Du Preez presiding. Swartz was introduced to a congregation of over 2,000 by the conference secretary, Dr. Mzonzima Gwala. The Charge was done by the Conference president, Pastor Randall Gelderbloem. Ordination and commissioning certificates were handed out by Du Preez with assistance from Union Secretary Pastor Trevor Kunene.

Du Preez noted that other women have been granted Commissioned Minister Credentials before, but as departmental leaders, “not as female pastors being granted ecclesiastical authority as their male counterparts,” he said. Those women granted credentials previously were issued their credentials on the same basis and in the same manner as treasurers, auditors or other employees who would normally not be eligible for ordination.

Swartz (56), a former radio journalist for the SABC (South African Broadcasting Corporation) left her career to study theology at Helderberg College, where she graduated with a BA Theology in 2010.

She served as an intern from 2010-2013 in the Cape Midlands District. Recognizing her unique gifts in working with young adults, she was given the responsibility of managing the student churches in the campuses of four secular universities, where she serves as the chaplain to those campuses and the pastor of the student churches. 25 persons have been baptized as a direct result of her ministry. (We were unable to reach Swartz for comment.)

Swartz’s supervisors, Pastor Bucwa, Pastor Gelderbloem and Pastor Njingolo, guided her through the internship program and recommended her for commissioning, Du Preez said. She was recommended by the conference Executive Committee, interviewed by a panel of eight senior employees under the guidance of the Union, recommended to the SAU President's Council and finally voted by the SAU Executive Committee--the identical process as for her male counterparts.

Her certificate of commissioning read:

was endorsed to serve as a pastor with all the ecclesiastical authority pertaining thereto at Bethel College, Eastern Cape, South Africa on the 28th day of November, in the year of our Lord 2015 and is duly authorized under the provisions of the Seventh-day Adventist Church to perform all the functions of the

Issued by the Southern Africa Union Conference of Seventh-day Adventists

“The response at the event was hugely positive,” Du Preez said, “with the 2,000+ congregation, consisting of more than 85% black church members, vocally approving the process and loudly affirming the other four female pastors who were in attendance.” 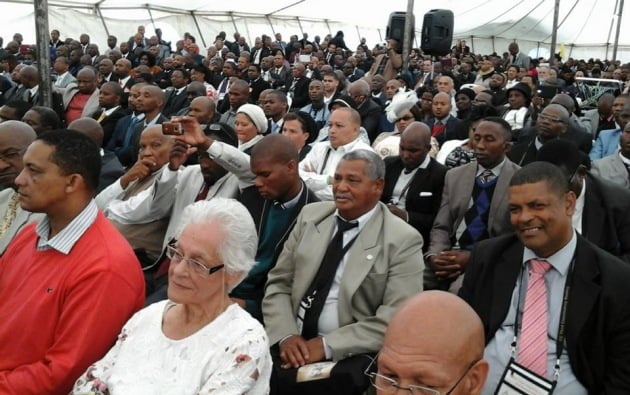 A photo uploaded to Facebook shows the huge crowd present for Swartz's commissioning.

While the attending body responded overwhelmingly positively, the Cape Conference Session during which Swartz received her credentials did not come without some strain.

According to those in attendance during the Cape Conference Constituency Session, two factions emerged for two different presidents. The factions had several caucus meetings beforehand and went head to head at the session, which opened Thursday, November 26. The session struggled to choose an organizing committee and the nominating committee, which caused serious tensions on the session floor.

On Sunday, the session succeeded in appointing a nominating committee who named the president, vice president and executive secretary, and deferred all other positions to the executive committee who must meet as soon as possible.

Despite the political maneuverings, Saturday was a day of celebration as Swartz made history. With her commissioning, Candy Swartz become the mother of Africa’s credentialed women ministers, and there will be many more!