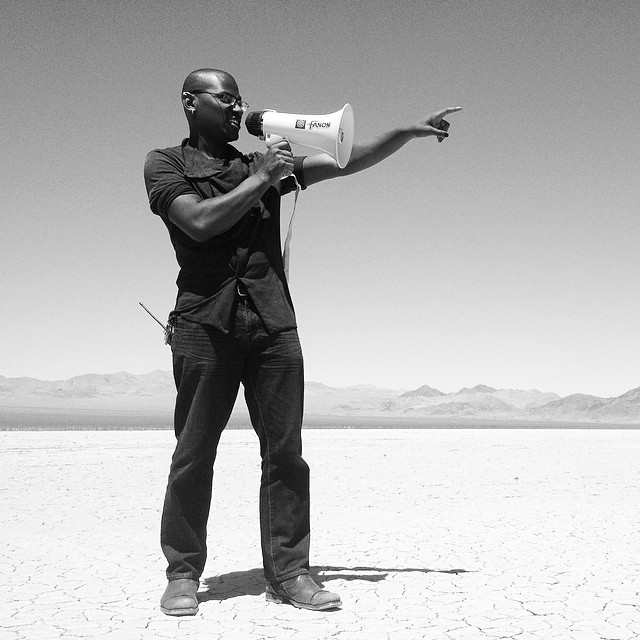 Leslie Foster, Southern graduate and filmmaker, brought the beginning of his Ritual Cycle film installation to our UltraViolet Arts Festival in September. Now he is placing the project at an art gallery, hoping to push viewers into discomfort and exploring God beyond the little boxes.

Question: In your latest project, called Ritual Cycle, you are creating an art installation made up of five short films portraying God in various guises, including a woman and gender queer. Is that right?

Answer: Ritual Cycle is a film installation that explores divine identity through five short films, which incorporate unique rituals. These include explorations of the Divine as feminine, as genderqueer (or as a genderqueer person, to phrase it in a slightly different way), as sibling, and as lover. I would say these are not guises, but God in all God's amazing possibilities. It is an attempt to show God in a way that dissolves the boxes in which we normally place Her. God beyond our gender binary and even our conceptions of God as simply a trinity. The five rituals explore lament, cleansing, hope, rest, and celebration.

So far, two of the five short (five-minute) films have been completed (and can be viewed on online). In the first, called "Mother Godde, a Ritual of Lament," a woman in white walks into the dessert and performs a ritual — you describe it as exploring "the concept of divinity as undeniably feminine and as a grief-stricken parent." Can you explain your process of inspiration and how you came to create this scene?

Inspiration for me is always a spiritual thing, but it happens in all kinds of different ways. Most of the time through hard work, spending each day in the practice of creating, sometimes through amazing flashes that just hit me. "Mother Godde" happened in one of those flashes. I saw the scene, the ritual, all at once, then I just had to flesh it out. I've always enjoyed liturgy, ritual spaces, and the surreal. I think those all fused in the creation of Ritual Cycle.

Experimental film is such an amazing way to explore the divine. God is so far beyond what we can imagine or verbalize. Sometimes it takes burying the words we have into images so we can explore things we can't express at all and emotions for which we have no words.

Without reading the title or description, how would a viewer know you are depicting an image of God?

I would say that it's likely that the viewer won't know explicitly that this is a depiction of God if they don't read the title or description. I'm okay with this. I think God has a beautiful way of approaching us in a wonderfully quiet and subtle way at times, often without announcing any presence.

For the few people who see this without title or description, I hope we have created something that allows them the safety to feel their emotions fully, to explore their own rituals a little more closely. In this, I hope we've opened a door to the divine, as Jesus would say, for those of have ears to hear and eyes to see. But this also must be a safe space for those who claim no religious belief. If someone wants to come into the space and have an experience stripped of any religious or spiritual trappings, they should be able to do that; I want them to feel safe too.

The amazing thing about art is that we just started the journey — people will come with their perspectives and interpretations and have their own experiences that we can't dictate at all. We have created a space that has the potential to be a gentle guide, but doesn't force the viewer to head toward our ideal definitions.

I think this is the perpetual dance between the artist, the Divine, and the audience. We let it go and hope beyond hope that we've created something that will create a spark in someone else. We want to be visual parable-makers and if we can leave viewers as curious (and sometimes) confused as Jesus left his listeners, I don't think that's a bad thing at all.

In the second film, two men perform a ritual dance in an abandoned warehouse, holding mops of fire. How was this specific dance decided on? Is this an actual ritual performed somewhere? How was it choreographed?

The second ritual, of cleansing, has several points of inspiration. A few years ago, I was at a Burning Man-relates event and was watching fire dancers perform. When the performance was over, a dancer came and mopped the stage with flame to clean off the remaining fuel. I was captivated by how beautiful it was and knew it had to be incorporated into a project.

The ritual of cleansing is also a ritual of service — God as servant. Scott Arany, my creative partner and I, thought creating a dance with flaming mops would be an excellent ritual for this concept. I worked with a fantastic choreographer, Angelina Prendergast (who also co-stars in the third ritual) to craft the dance seen in the ritual.

Scott and I thought it would be important to create unique rituals for the project. So many faiths have injured people and we didn't want visitors to the gallery space to be triggered or feel defensive before they even have a chance to explore the films. In wanting to break down the walls we place around the divine, we found it was important to craft rituals from scratch.

I believe you have lived all over the world, including Asia, Europe and America. Were your parents Adventist missionaries? What accounted for your constant movement?

I have lived all over the world, due at first to the fact that my parents were and still are Adventist teachers (they currently work in Thailand; my mother is the administrator of an elementary school and high school and my father is a business professor).

As an adult, I've moved around because I've had the amazing chance to work in a few different countries as a filmmaker and I'm an urban nomad, I truly love traveling.

Clearly, your travels have inspired your filmmaking, as the images you portray feel very "ethnic" for want of a better word. Is there any specific culture, religion or country you had in mind as you were creating these films?

There isn't a specific culture or religion we had in mind when we created these films. The words we kept repeating in our creative meetings was "otherworldly" or "alien." We wanted the rituals to feel novel with touches of familiarity. The music for "Mother Godde" was created by Scott with the aid of Rainbow Underhill who has studied Jewish and Balinese music, and Britta Kay, a Jewish cantor.

And speaking of music, it seems you worked closely with musician and composer Scott Arany to create these films. How did you come to work together? How much of a creative influence did he have?

Scott is my collaborator and creative equal for this project. He composed most of the music and as a gifted liturgist and theologian, worked with me to craft each of the rituals. We met at the Hollywood Adventist Church and quickly found we shared quite a few interests (and a birthday). We worked on little projects for years and when I was first inspired to create "Mother Godde," I knew that he would be the perfect creative partner.

I believe you are raising money right now to help place your installation at the Level Ground Film Festival in Pasadena, and so far have about $3,000  — half of your goal. Why do you need to raise these funds for the festival? Where is the money coming from in general?

While Level Ground Film Festival is our main presenting sponsor and I serve as their artist-in-residence, the gallery show will not take place at the festival proper. We are currently raising funds in order to have a five-day run at a gallery in Hollywood or downtown Los Angeles at the end of February. Our goal is $6,300 and we have currently received pledges for $4,300. The budget includes funds for materials (wood, cloth, projectors, speakers) needed to build the installation, rent for the gallery space, and payment for our installation designer.

What has been the response to your films in Ritual Cycle so far? Who has seen them? What message do you hope that people who have seen them come away with? What would be your ultimate goal for this installation, if it could go anywhere?

Over the last three years, the first two films of Ritual Cycle have been shown at group gallery shows as well as at several Level Ground film festivals. We've had a pretty wide variety of people view the projects, though at this point, the audience has leaned majority Christian, which is something we'd like to change. The exploration of the divine is far larger than any one belief group. The response so far has been very positive, with the occasional confused reaction (which I don't mind at all!). It's been exciting and humbling to see a group of people become avid supporters of the project.

Scott and I want people to leave the installation having found a safe space to express their joy or grief or hope. We want them to be empowered to push into discomfort and explore God beyond the little boxes in which they have placed God. I hope we have created visuals that stay with people for a while and that are aesthetically nourishing for them.

As far as where we'd like to see the project go? We'd love to create a package with the project that we can use to help people create unique rituals for their own communities. We're already working with some folks to create Ritual Cycle workshops. We'd also really like to take the five rituals on tour around North America and perhaps beyond.

How did you become a filmmaker?

My journey to becoming a filmmaker is a pretty tangled one, which involves spending three years studying pre-med biology, a German degree, and a few different countries; but the short answer is that I discovered that it was the perfect synthesis of so many things that I loved, from technology to fashion design, and a perfect way to explore a lot of things I hadn't found any other way to express.

Tell us about some of the other projects you are working on.

I'm currently working with a group of filmmakers on pitching a miniseries based on the life of young Frederick Douglass. We've written the pilot and have been working with our representation to get it to studios over the last year. I'm also working on a sci-fi webseries with some of the same filmmakers. Finally, I've been working on a documentary about violent homophobia in Jamaica since 2001.

I believe you studied filmmaking at Southern Adventist University. What made you choose Southern? Do you feel Southern helped you to hone your craft and become the filmmaker that you are?

I did study film at SAU and finished up in 2006. I think the Southern film program was very important in helping me hone my craft and giving me a strong set of tools that I was able to use in my professional career. It allowed me to challenge myself and stretch my artistic wings, something for which I am very grateful.