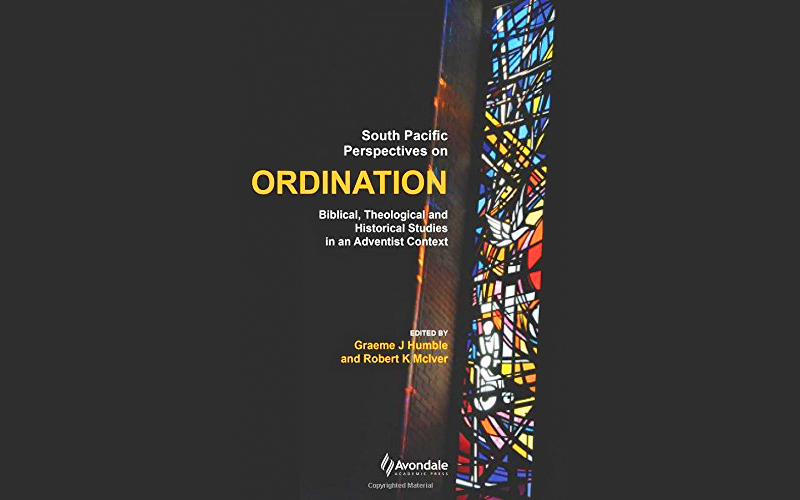 This book, a collection of research papers, has been authored by fifteen Adventist academics from the South Pacific, and mostly from Avondale College of Higher Education, including two women. Most chapters were commissioned by the Biblical Research Committee of the South Pacific Division (SPD) of the Seventh-day Adventist Church. Before publication, all but one of these papers was peer reviewed. These papers were designed to provide guidance to the SPD during several years of intense study of the theology of ordination and most especially of how to affirm women in ministry. Thus, the volume contains discussion of aspects of ordination to gospel ministry while providing both academic and missional insights on the topic. Though written from a Seventh-day Adventist perspective, Christians of many persuasions may well be interested.

The book is well structured to lead the reader toward an appreciation of the united conclusion of the individual authors that God can indeed use persons of both genders in one ordained gospel ministry. To this end, the book divides easily into five parts, each of which will be briefly treated in the hope that this useful collection of essays will be of help to a more global audience.

Three senior Adventist academics, Professor Ray Roennfeldt, a member of TOSC, Dr. David Tasker and Dr. David Thiele lead readers to introductory but informed conclusions to the question ‘May Women be Ordained as Gospel Ministers?’ Roennfeldt sketches the broad outline of both responses to this question. The he suggests that the Wesleyan Quadrilateral might provide the fresh methodology necessary to bring resolution to this seemingly intractable issue. Tasker argues that one’s Christology and Eschatology must be carefully and properly balanced. Thus he sees Adventists, not only as an eschatological movement but also as a Spirit-saturated Body of Christ, involving people of both genders in proclamation of the Word. Thiele investigates whether women are disqualified from ministering for physical, intellectual, spiritual, ontological or cultural reasons. He concludes that Scripture doesn’t disqualify them for any of these reasons.

Two biblical studies, one from Dr. Ross Cole, an Old Testament scholar, and the other from Dr. Kayle de Waal, a New Testament scholar continue to provide helpful perspectives. Cole deliberately titled his chapter “The Language of Appointment to Offices and Roles,” and without significant reference to ‘ordination.’ Here he maintains that the laying on of hands “comes at the beginning of the office or task, not long afterwards as a reward for work done” (pg. 85). He also concludes that “the use of gift language in the context of appointment to ecclesiastical office emphasises the wide range of offices and roles that may be involved” (pg. 85). De Waal’s paper is a short, preliminary theology of ordination, once again based on lexical analysis. He finds no scriptural evidence for different levels of ordination, or that ordination was understood differently by those with differing roles. Rather it references God’s calling to proclamation and service.

The two historical studies treat early Christian history and the experience of Ellen White respectively. Two Polish-Australians, Drs. Darius Jankiewicz and John Skrzypaszek enlighten the reader here. Darius Jankiewicz discusses the ‘problem of ordination’ as he draws lessons from early Christian history. Skrzypaszek, however breaks new ground as he seeks Ellen White’s perspective on her own divine ordination early in her life. Accordingly, Ellen White first gained a revelation of God’s love, followed by a matured burden for people together with a real understanding of her task.

Jankiewicz returns in the theological studies section and provides his widely appreciated perspectives concerning the authority of a Christian leader. Then Dr Wendy Jackson provides a very helpful essay which strongly suggests ways that help readers distinguish between a sacramental and non-sacramental model of ordination. In a non-sacramental model, such as Adventists embrace any hierarchical or status distinction between the so called clergy and the laity has no New Testament precedent.

The fifth and final section of the book is titled “Moving Forward.” A scientist, and former president of Avondale College of Higher Education, Dr. Geoffrey Madigan leads by providing a helpful way for the reader to look at our corporate Adventist past and future, and thus to process the concrete proposals and recommendations found in this section of the book. Then comes a helpful and research based discussion of the “lifeworlds” and of Adventist female pastors in Australia by Dr. Drene Somasundrum, an Adventist academic and chaplain. This allows us to glimpse the challenging world of Adventist female pastors. Next, Dr. Ronald Stone, a Fiji-based Tongan ministerial practitioner reflects with the reader concerning the possible ordination of local church departmental leaders. The present writer authored the penultimate chapter which provides a solid theology of the laity or whole people of God. This is based on the twin biblical teachings of the priesthood of all believers and of spiritual gifts. Several practical and organizational principles are then drawn from this theology, which in turn inform a renewed understanding of the theology and practice of ordination.

Dr. Barry Oliver, missiologist, immediate past President of the South Pacific Division, and a member of TOSC, titled his paper “Moving Forward in Unity.” It describes in broad brush strokes a way forward through this issue that respects the global diversity while maintaining unity. It resonates very much with the final proposal made by the General Conference in 2015. The rather orthodox perspectives from which he writes are carefully outlined and he is careful to build on our Adventist history and heritage. Oliver affirms allegiance to God and to fellow Adventists and then the involvement of all in seeking a final solution to this issue.

For the present writer there are several key issues taken up repeatedly by more than just a single author. These issues may well serve to illustrate the poise and balance with which the South Pacific region of the Adventist faith communion has sought to handle this issue. In this way, they encourage continuing discussion and research by all who are willing to be led by Scripture.

Firstly, both Ray Roennfeldt and Barry Oliver, at the beginning and end of the book have emphasized their respect for “the reality … [of] the differing [Adventist] perspectives on ordination” (pg. 272). And this, at the same time that they hold strong and well researched views for themselves. It is probably these two authors in particular who may have done more to suggest a more united hermeneutic for Adventists to use. Such a hermeneutic may well assist Adventists toward reaching a more satisfying resolution as far as the nature of ordination in the Adventist context.

Secondly, both Wendy Jackson and the present writer have explained in some detail that the distinction Christians, including Adventists, draw between the status of the clergy and the laity  is unbiblical and unhelpful. As Jackson says, “Christians are rightly called the laos of God. Both words, laos and kleros, are used in ways that signify the idea of the Christian community as a whole. The NT context does not support a difference between them” (pg. 202). This division results from a very unbiblical model of ministry. And if this be so, Adventists can’t easily use arguments against the ordination of women clergy, as many do. Thus the contributions of both authors deserve special attention.

Thirdly, both Ross Cole and Ronald Stone open up to Adventists the possibility of appointing, or ordaining people of both genders to a variety of officers and roles in Adventist leadership, both for salaried and unsalaried Adventist members. As Cole so eloquently says, “the OT and NT language of sanctification or separation shows how God calls every one of his people to a variety of different offices and roles. The installation comes at the commencement of the role, if not beforehand. Therefore it is not a reward for a job well done” (pg. 86). To extend ceremonies of appointment to more fully embrace the whole people of God would certainly emphasize the missional nature of the Adventist movement, and help establish a renewed ministry of all believers.

This collection of research papers will reward the careful reader. It doesn’t pretend to be the final word on the subject. It was never the intention of the book to provide a final theology of ministry and of ordination, supported by all the present authors. However, I trust that this present volume will be accepted as a reasonable and significant contribution to an ongoing debate of this nature. In many senses, it may lead the way for contributions by other sectors of the global Adventist faith communion. Whether it is acknowledged or not, each of the various regions of the Adventist world face differing challenges and issues when it comes to articulating the theology and practice of ‘ordination.’ It is wise to listen to all quarters!

Peter Marks has studied at Avondale College of Higher Education; Newbold College of Higher Education and the University of New South Wales. He has an MA (Religion) and a Master's degree in Information Management. He served in the Adventist ministry in Australia and New Zealand before spending five years as a lecturer in English at Sunchon National University and Sahmyook University, both of which are in Korea.