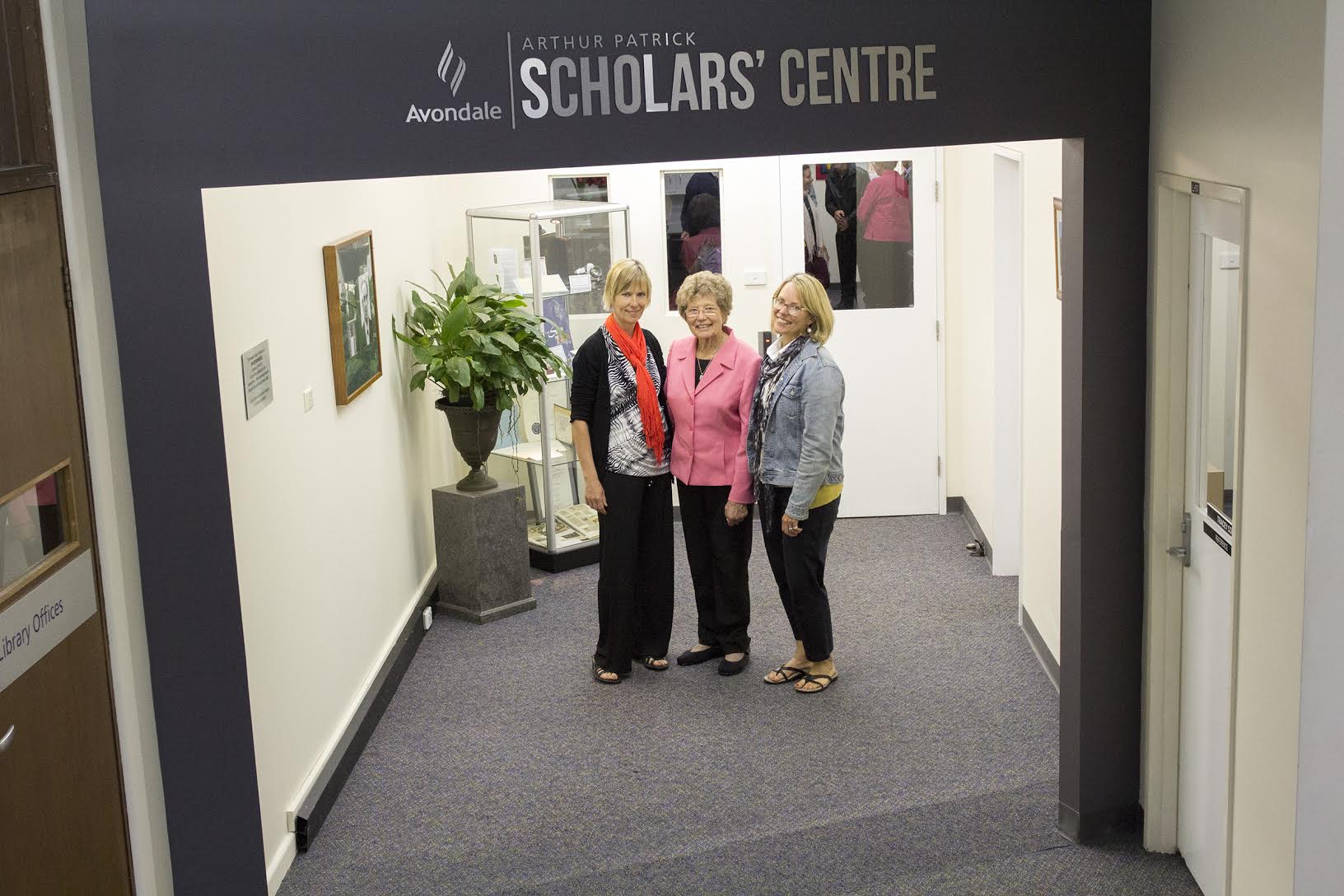 Avondale College of Higher Education has named a scholars’ center on the college campus in honor of the late Dr. Arthur Patrick. The naming of the center honours an alumnus whose honest understanding of the issues confronting his faith often came at his own detriment.

During a ceremony in Avondale Libraries (Lake Macquarie campus) on October 27, family and colleagues of Dr. Patrick described the Avondale academic as a consummate pastor, a humble but tireless scholar committed to well-considered change, and a caring student mentor.

“Arthur reached out to people who were sometimes in great disagreement with him and befriended them, or at least he tried to be their friend,” said president Professor Ray Roennfeldt in his welcome. Patrick’s understanding of the ministry of Seventh-day Adventist pioneer Ellen White, in particular, “pushed past boundaries some people would like to have put in place. He had answers to questions people were asking, but his answers were not always acceptable. Now people are saying his answers were probably the best we could give.”

Patrick came literally out of the bush to study at Avondale. While his Leaving Certificate results admitted him to The University of Sydney, he enrolled in the then Australian Missionary College’s first intake for the Bachelor of Arts (Theology) degree. Called to work at Avondale, Patrick’s contribution over more than 17 years included serving as the first then curator of the Ellen G. White Seventh-day Adventist Research Centre, as lecturer in what is now Avondale Seminary, as registrar, as the first president of the Avondale Alumni Association and, in retirement, as an honorary senior research fellow. He published extensively, even on his adventiststudies.com blog “with characteristic determination” just days before his death in 2013. “He referred to it as his last post,” said head of the discipline of science Dr Lynden Rogers.

Offering “penetrating insight” into the academic issues confronting the church, Patrick contextualised the theological positions of the church’s past and explored the interface between Christianity and science, receiving an award from the prestigious Charles E. Weniger Society for his contribution to Adventist scholarship. “Arthur was totally unafraid of evidence,” said Rogers. “His was the ability to calmly and perceptively analyse the data and to masterfully synthesise a response.”

The Arthur Patrick Scholars’ Centre is on level one of the library. It features three spaces for higher degree research students—a study room with lockable desks, filing cabinets and wi-fi, a seminar room and a foyer with lounge chairs and a display of Avondale’s peer-reviewed journals and journals from other higher education providers.

In his opening prayer, Dr. John Skrzypaszek, director of the Ellen G. White Seventh-day Adventist Research Centre, prayed that the students who use the center “not only discover new things but also push through the boundaries of established traditions so we may all see a bigger picture of you, a loving God who is reaching out to all people.”

Zanita Johnson said the naming of the center would have meant so much to her father. “I suspect he would have seen it all as ‘a bit of a fuss,’ but he would have been passionate about the research opportunities it will foster. Nothing bought that glint of excitement to his eye quicker that someone expressing an interest in further education.” Johnson spoke of the joy and satisfaction Patrick received from mentoring students. One of the final tasks he completed from his hospital bed: “advising students of his regret that he would be unable to continue mentoring them in their research.”

Johnson’s sister, Adrielle Britten, admired her father’s “persistent commitment to well-considered change and consistent demonstration to embrace that change in his personal, academic and spiritual life.” She remembers reading with him from one of the books in the small pile on the window sill of his hospital room. In A View from the Ridge: The Testimony of a Twentieth-century Pilgrim, Australian novelist and playwright Morris West “characterises his life as like carrying a heavy load of unexamined certainties. Dad saw his own life in this way, too. It is our hope this centre provides scholars with a productive space where they, like Dad, can continue the lifelong process of examining their own load of unexamined certainties.”

The ceremony ended with the unveiling of a plaque by Joan Patrick. The plaque honours her husband’s “life of careful and productive scholarship as theologian and historian.”

In the image above, Dr. Arthur Patrick’s wife Joan (centre) and daughters Zanita Johnson (left) and Adrielle Britten (right) at the scholars’ centre named in his honour.