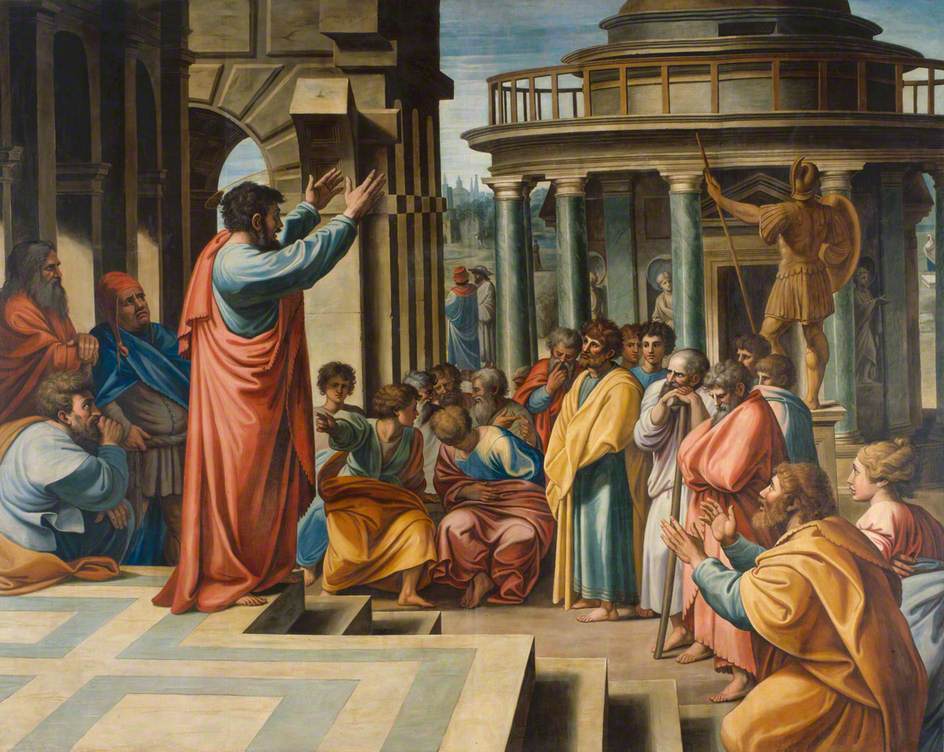 “Whoever speaks must do so as one speaking the very words of God.”--1st Peter 4:11

I was in San Antonio during this year’s General Conference Session. Although I was not able to observe the business meetings as much as I would have liked because of other duties, I was struck by a phenomenon that made me uncomfortable. It is a phenomenon shared by many other Protestant denominations whose church meetings I have guest-attended. I noticed that the arguments made for or against any position were almost always devoid of theological content.

Some might find my last statement odd. After all, did not people regularly refer to the Bible, God, and other similar theological categories? While it is no doubt true that people spoke like Christians by appealing to Christian theological categories, few were able to do so in a theologically consistent manner and in keeping with some recognizable standard of Christian speech.

For instance, I heard a lot of people “proof-texting,” that is, using scriptural passages to buttress particular positions without regard for the exegetical context or the narrative shape of the Christian gospel. I heard others appealing to secular norms of justice, tolerance, and “progress,” but without any explanation as to how secular norms are to relate to confessing Christians and why they should be normative for Christians. Still others engage in anti-Catholic rhetoric as if the fact that something smells like Catholicism is enough to reject it.

I found myself asking, more often than I liked, “What does this argument have to do with the gospel of Jesus Christ?” We seem to have lost the grammar of Christianity. That is, a coherent way to talk about our faith and, since every language is embedded in a way of life, how we should live as Christians. We have somehow acquired the habit of bypassing rigorous theological argumentation. How did the church become this way? I would to make some suggestions.

Whenever Christians are confronted by a reified ecclesial institution and intransigent dogmatism, one very tempting response is to turn inward and retreat into a personal religiosity. This makes tremendous sense. Hegel observes in the Phenomenology of Spirit that external pressures and limitations often force our consciousness to withdraw into itself (e.g., stoicism, scepticism) in order to gain some degree of freedom. In Christianity’s case, this turn enabled Christians to explore and experiment with neglected dimensions of their faith.

Pietism was such a response to rigid Lutheran scholasticism. Its emphasis on personal piety, according to its proponents, enlivened Christian faith and yielded ecclesial practices that many Adventists still cherish today. For instance, we must thank pietism for institutionalizing the priesthood of all believers and for challenging a kind of rigid clericalism that was present in both Protestant and Catholic traditions at the time. However, this inward turn is also risky when taken to the extreme.

Pietism prepared the way for both theological fundamentalism and liberalism. Needless to say, both traditions are very much alive today. Though very different, they share a basic similarity: that religiosity is primarily about the individual. What the two traditions disagree on is what should be taken as normative by the individual. For the fundamentalist, it is a particular understanding of “the plain reading” of the biblical text, independent of interpretive mediation by tradition or other authority. For the liberal, it is experience, reason, desire, and so on. A shallow form of liberalism today is largely relativistic. Its proponents say things like, “I think Christianity should teach that...” or “Jesus Christ is my Lord, but that doesn’t have to apply to everyone.”

Of course, what both perspectives miss is the fact that the private and the personal are always already colored by our social existence: by our cultural, political, and economic life. Texts are always interpreted, as are reason and personal experiences. Alasdair MacIntyre points out that reason is always rooted in particular traditions that define the parameters of what is thinkable. More importantly, the reverse is also true: our personal beliefs and confessions also imply a particular view of social life, even if this social life is defined by individualistic norms.

This is why in a modern liberal society--in the non-pejorative sense of political liberalism--it is quite easy to subordinate the content of the Christian faith to the dominant social norms or hysterias of our time. That is, it is easy to privatize religion. By hiding behind the abyss of their individuality, both fundamentalists and liberals render their very “personal” faith immune to criticism. Any criticism of their spirituality, then, amounts to an attack on their personality. Fundamentalism and liberalism both give rise to their own rigid forms of spirituality.

It is, therefore, not accidental that Adventists particularly and Christians more generally have rarely encountered a Christianity that could stand radically opposed to the presupposed values of the day. For example, today there are more people willing to die for their nation than for their faith. We have assumed for far too long that we can preach and listen to the gospel without moral transformation.

When we hear things like, “Christianity (or religion) is just about being a good person,” the underlying assumption is nearly always that the common sense view of goodness is to be taken for granted. Here we are to heed the warnings of Karl Barth. Barth dedicated his entire career to warning against the dangers of a Christianity that stands impotent before the principalities and powers. After all, he saw the same sophisticated liberals become belligerent nationalists during the First World War and join the Nazi Party before the Second World War.

Many viewed and continue to view Barth as a reactionary. I certainly thought so when I first read him. But this is mistaken. Whatever we might say about him, he is right about one thing: a Christianity that is grounded in our arbitrary wants and needs is not really worth our time. We have two options. Either there is a Christian gospel that is capable of confronting us when we go astray or there is Feuerbachian projectionism--the projection of our deepest wishes into, for lack of a better word, an idol.

But if the Christian gospel is something objective, then we must discover again the grammar of Christianity. In other words, we must learn anew what it means to encounter and bear witness to the one who lived, died, and rose again. This is surely a dying art in Adventism, as the last General Conference Session made clear. As a result, we are just as confused about the proper shape of Christian life as we are about the meaning of that city which has our true citizenship, the church.

It is not a simple task. It requires that we listen to and debate with one another, and attend faithfully to the long tradition of witnesses and thinkers who came before us, whose voices should hold us intellectually accountable. It requires us to engage in serious conversations about the terms of the conversation. After all, this is what it means to, borrowing a phrase from Paul, build up the body of Christ (Ephesians 4:12). Are we not called to embody, for the sake of the salvation of the world, a peace that only Christ can give (John 14:27)?

Yi Shen Ma is a Ph.D. student in Claremont School of Theology. He is the Development Director of Adventist Peace Fellowship. Prior to his service in the United States Navy as a religious program specialist, he worked as a young adult pastor. He blogs with Matt Burdette and Shane Akerman at Interlocutors.