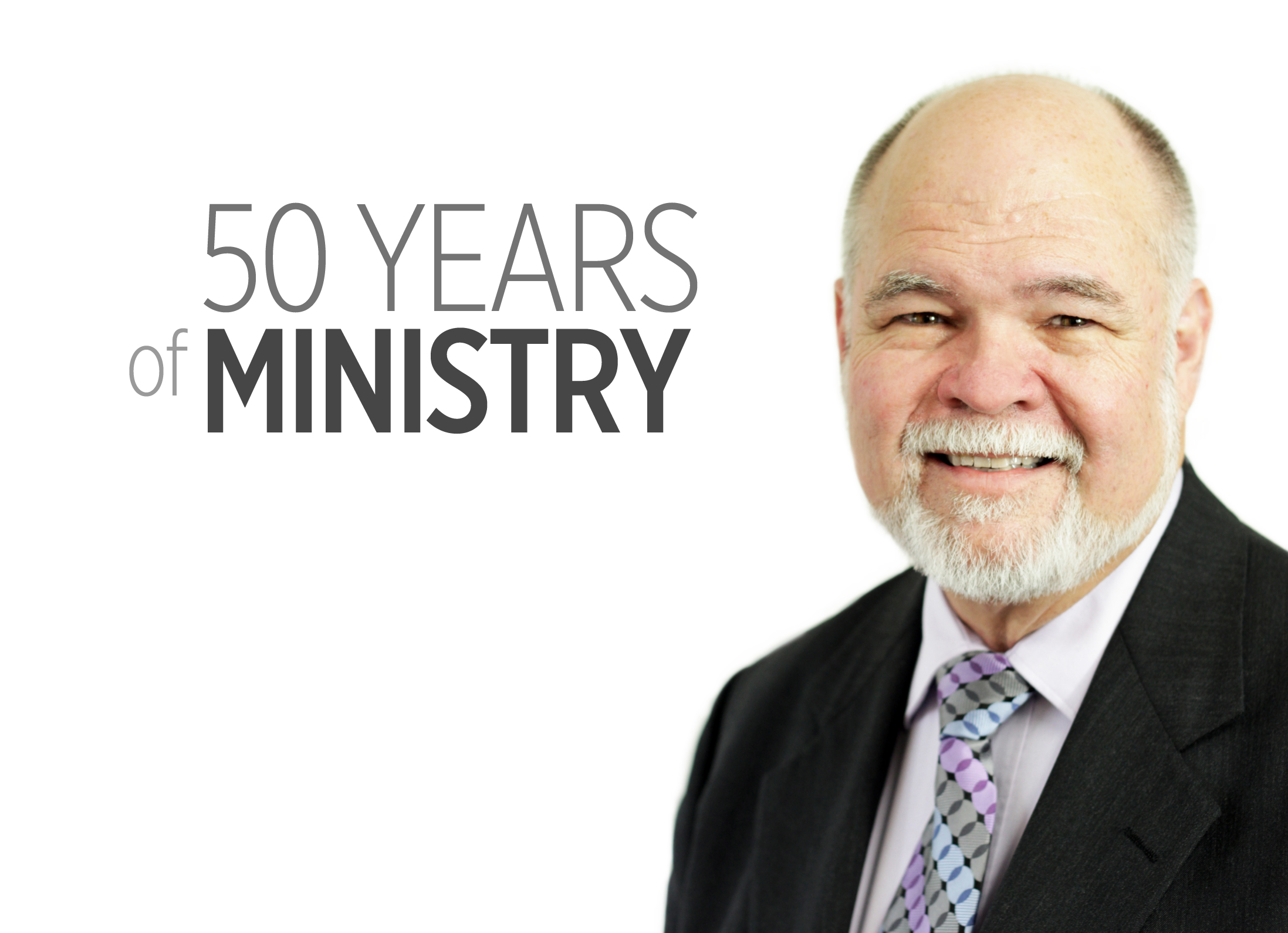 Senior pastor of California's 2,000-member Azure Hills Church, John Brunt, retired from his long career in the Adventist church two months ago. In his 50 years of service, he has seen the church grow and change and has been present at some pivotal moments. Spectrum asked Brunt about the milestones of his ministry, the evolution of his faith, his greatest disappointment and his advice to the next generation.

You have spent your life working for the Adventist church as a pastor and administrator, from Walla Walla University to your final post as senior pastor of the Azure Hills Church in California. What is the best job you have ever had?

I have thoroughly enjoyed all 50 years, from starting my ministry as youth pastor of the Paradise Valley Church near San Diego on September 1, 1965, to my retirement from the Azure Hills Church on August 31, 2015 — 50 years later to the day.  It seemed to get better and better, and in that regard the last thirteen-and-a-half years at Azure Hills stand out as the best.  I not only had the opportunity to pastor a wonderful, gracious congregation and work with an incredibly dedicated group of associates, but I also had the privilege of teaching at La Sierra University and Loma Linda University during that time.  Therefore I have able to combine my interests in pastoring, preaching, and teaching all at the same time.  It kept me busy and (for the most part) out of trouble, and I have truly enjoyed it.

What has been the biggest challenge, or the most disappointing thing, about your career in the church?

It is sometimes a bit discouraging to sense that we have made progress on some issues and then see us slip backwards.  A small and maybe trivial example: I thought we had gotten past the distrust of modern translations of the Bible and had educated the church to understand the process of the transmission and translation of the Bible, but then in some circles we see old attitudes that the King James Version is the only trustworthy Bible pop up again.  Progress can never be taken for granted.  We have to keep educating on issues that should have been settled.

Is there a particular moment you would consider the most difficult?

Yes.  We went through a period at Walla Walla when the School of Theology was under attack by some of our own church leaders at the time.  I was the former Dean of that School and was then serving as academic vice president, so I was very much in the center of the conflict.  It was an extremely difficult time.  Fortunately the board created a commission that investigated and issued a report that put a number of the charges against the School of Theology to rest, although it also made suggestions for improvement in the School.  It didn’t totally solve the problem, but it did help mitigate the conflict.

What do you count as your greatest success?

I think I would rather think in terms of what has been the most rewarding.  Success belongs only to God.  We plant and water, but only God gives growth.  I have found it especially rewarding to help mentor those who will carry on the future ministry of the church, both in the educational and pastoral roles.  At Walla Walla I was privileged to search for and hire several young faculty members who have gone on to become significant teachers and leaders in that institution.  At Azure Hills I have enjoyed working with young associates, some who continue to bless that congregation, and others who have gone on to other places to make significant contributions in ministry.  Watching the next couple generations develop and blossom, and being able to have some small part in helping them along, has been one of the most rewarding aspects of my ministry.

What motivated you to become a pastor? When did you decide?

I grew up in the Glendale City Church where we had a long series of great pastors who were also excellent preachers.  From a very early age I started looking to them as models and thinking about becoming a pastor.  I like to think God was leading in that process.

How would you say the Adventist church has changed over the decades of your career? Has the way the administration works/how decisions are made/the hierarchy changed? What about the beliefs and general overall thinking of the church members?

In 50 years the church has changed a lot and most of it has been for the better.  For example, at least where I have been working, congregations now have much more say in pastoral selection and pastors are much freer to make choices about their placements.  I think this is good because it gives both congregations and pastors greater buy-in and commitment.

We have also grown theologically.  I believe that over all we have become less legalistic and more Christ-centered.  Many Adventists have become more involved in engaging with the social and ethical issues of the world as part of their Christian commitment.  There is less preoccupation with trying to figure out when Christ will come and more with living the Kingdom now.  We have recognized that we prepare people for the Second Coming not by scaring them with beasts but by inviting them to commit their lives to Jesus and His mission to bring the values of God’s Kingdom “on earth as it is in heaven.”

Yet such progress is never without setbacks.  And there are areas where we as a church have regressed.  When I grew up, to be an Adventist included a commitment to peace and a refusal to engage in combat.  We were conscientious non-combatants.  That has almost entirely been lost today, and I think we are the poorer for it.

Another area of regress has been the growing tendency to try and shore up the borders of Adventism by defining beliefs ever more precisely and divisively.  Discussions on both the Fundamental Beliefs and the Church Manual at the recent General Conference Session are examples of this tendency.  On the other hand, local churches seem to be flourishing by recognizing, as my friend Rick Rice has taught us, that church is about belonging as well as believing and behaving.

Have your personal beliefs changed or evolved in any way?

I think I can best answer this by expanding on what I just said.  Over the years my basic theological beliefs have not changed as much as my approach to ministry.  What we believe is important.  It inevitably affects the way we live.  Therefore theology is vital, and I have devoted much of life to it.  But I hope I am more attuned to the personal aspects of our faith than I once was.  I am much more engaged in the belonging aspect of church.  I found over my years at Azure Hills that transformation comes less from theoretical beliefs than by involvement in a community of faith and caring.  I still care about and work to do theology, but I also believe that Sabbath fellowship meals may have more to do with salvation than fundamental beliefs.

You were on the Southeastern California Conference Committee that helped to elect Sandy Roberts, the first woman conference president in the Adventist church, and you have spoken out strongly in favor of the ordination of women. What do you think will happen in the future as the Adventist church wrestles with this issue?

As my friend Gerald Winslow says, “You can’t hold back the dawn.”  The church will end its discrimination against women, in spite of what happened in San Antonio.  I remember all the supposedly “biblical” arguments that were used when I started my ministry for racial segregation and opposition to interracial marriage.  Today we look back at those arguments with embarrassment and disbelief.  The day will come when we recognize that the supposedly “biblical” arguments against the full involvement of women in ministry are equally specious.   We are already seeing more conferences and unions take various actions to mitigate the General Conference vote.  Even after the disappointment of San Antonio, more rays of dawn are becoming visible.

Let me add that I had the privilege of serving on the nominating committee that elected Dr. Roberts as our conference president in Southeastern, and I haven’t regretted it for a moment.  She is one of the best administrators I’ve ever worked with, and the conference is flourishing under her leadership.

I have also had the privilege of working with several women associates at Azure Hills over the years, and every one of them has been a huge blessing to the ministry of that congregation.  I can’t imagine some of the good things that happened there, especially in our generational ministries, without the dedicated women who have given their lives to ministry.  And the idea that the church should not affirm their ministry in the same way as that of the men they work with is hardly in keeping with a God who shows no partiality.

You and your wife have moved north to Seattle, to be nearer to your children and grandchildren. Besides spending time with your family, do you have any other specific plans of how you will be spending your time now that you have officially retired?

It’s hard to think too much about that as we are still surrounded by boxes that we need to unpack.  But once everything is settled I have some writing I would like to do and have already accepted several speaking appointments, most in this area but some internationally as well.  I’m sure I’ll keep busy.  But we really are enjoying lots of time with our grandsons, and we don’t want to become so busy that we infringe on that.

What advice would you have for young ministers in the Adventist church?

Keep your eyes focused on Jesus.  The work will not always be easy, but then Jesus already made that clear.  After all, ministry is about service.  But there is nothing more rewarding and exciting than watching God work and being part of what God is doing to bless people.  Also, when you get criticism, don’t become defensive.  We all get criticism.  You will be amazed at how God raises up saints who support you.  Love the people, and they will love you as well.

What do you think the Adventist church needs to do or focus on if it wants to continue to grow, as well as keep the members it has?

Let me answer with a passage of Scripture: Ephesians 4:15-16 (NRSV)

But speaking the truth in love, we must grow up in every way into him who is the head, into Christ, from whom the whole body, joined and knit together by every ligament with which it is equipped, as each part is working properly, promotes the body’s growth in building itself up in love.

I think we have been better at speaking the truth than we have at building up the body in love.  But if we focus on Christ, truth cannot be truth apart from his compassionate love for all, especially those considered outcasts and unworthy by the good religious folk of the day.  The church will succeed as long as our local churches are caring communities that demonstrate the compassion of Christ, by speaking the truth in love.