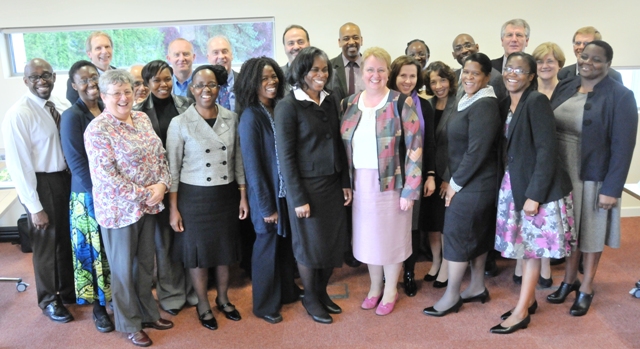 Pastor David Neal, Irish Mission President, joined with Church leaders from across the British Isles and the Trans-European Division leadership to affirm and support the courageous women who have dedicated their lives to various forms of ministry within the Church. This is his report:

The meeting in the boardroom of the British Union office on Wednesday, 28 October, ended late afternoon with prayer. Suddenly and spontaneously Church leaders found themselves surrounded by women pastors praying for the Lord to give 'their leaders', the necessary spiritual wisdom to lead. But the meeting was set up for the very opposite purpose, as a time of affirmation and prayer for the women pastors. The surprise action reinforced the message of one pastor, "Prayer is what has brought us this far."

With more than sixty female pastors and Bible workers serving in the Trans European Division (TED), and another thirty women serving in an administrative capacity, TED President, Pastor Raafat Kamal, had already made an immediate commitment to "support our female pastors, their constituencies and their congregations" immediately following the 'No' vote on the issue of women's ordination at the General Conference Session in San Antonio in July. This then, was the first of three TED regional meetings.

Organised by the British Union Conference (BUC) leaders, Pastors Ian Sweeney, Paul Lockham and Mr Victor Pilmoor; co-hosted with TED leaders, Pastors Raafat Kamal and Audrey Andersson; and supported by Dr. John Baildam, Principal of Newbold College; it was a time for encouragement, support and affirmation. For the gathered pastors it was also their time to speak ‒ and for leaders to listen!  And listen they did.

The women expressed that "We are still serving, despite all the challenges," stating "if God sent us here, let us do our best to His glory." In practical terms one stated, "The best witness for our call is ministering," while another expressed that "I have a quiet confidence that God is working through me."

Pastors Llew Edwards (BUC) and Patrick Johnson (TED) attended the meeting in their role of Ministerial Association directors. In his devotions Patrick emphasised, "Sometimes we get busy in doing things for God where we need to do things with God." That certainly came through during the day which focused not so much on disappointment regarding the 'No' vote but rather developed into a spiritual time of blessing as the women and leaders shared understanding together.

There were nevertheless open and honest challenges. "I feel lifted up personally, but lonely in communicating to members the validity of my ministry", one confessed. Another said, "We get on, support each other and cope, and very much appreciate members who are supportive and encouraging."

Pastor Maureen Rock explained that even after the 'No' vote, "I didn't feel hit in the stomach… for me it was business as usual." With an even greater determination she returned to her church to serve by immediately conducting a Revelation Seminar. She was rewarded with a capacity audience attendance.

So far, so good. But as administrators continued to listen, three serious concerns emerged.

1. Adventist youth don't like what they see! In the 'No' vote, many see discrimination, and they sense injustice. Equality is a value society holds with high importance, often a struggle for many to attain. How can it be that this is not a value the Church holds high? One pastor quoted a young person in her congregation, "I no longer feel an Adventist – how can my Church do this? I stay with reluctance."

2. There's a huge gap between what members should know about the Bible and what they do know. We need to train our members that what you hear through some sections of 'Adventist' television and internet media is not necessarily true.

3. While clearly a minority, some male pastoral colleagues are less than affirmative, with some lacking in grace. The issue appeared to be less about theology, but more about attitude. As one pastor put it, "We don't want to serve as ministers constantly looking over our shoulders. We want to work together with our male colleagues, and reduce the 'us and them'."

Pastor Ian Sweeney responded for all the leadership by saying that it is "horrible to have to hear of what you've been and are going through." Both Pastors Sweeney and Kamal went on to apologise for  their experience. Kamal continued, "Thank you for not giving up." It was a sobering and uncomfortable moment for the administrators in the room. Forces of ungrace between colleagues? How can this be? Is this what theological disagreement does to some of us ‒ ministers of the gospel, called and chosen?

What then is the way forward? From the collective voices of those present came the plea, "We cannot do this on our own, we need you beside us ‒ not just administrators, but also fellow pastors. We need your voice. Can you help us to talk with our church about our calling to ministry? Are you willing to stand with us and say, 'These women are called?'"

And while a number of practical ideas came forward, most centred on the theme of 'Education, Education, Education' – with a call for the various administrative units to work in concert teaching an increasingly diverse membership how to grow together.

As our time together drew to a close, Pastor Kamal echoing the words of Ellen White, reminded us that we have much to learn and much to unlearn. As the Church continues to grow together, those words still ring true.

David Neal is President of the Seventh-day Adventist Church in Ireland.