Adventists in the Spotlight 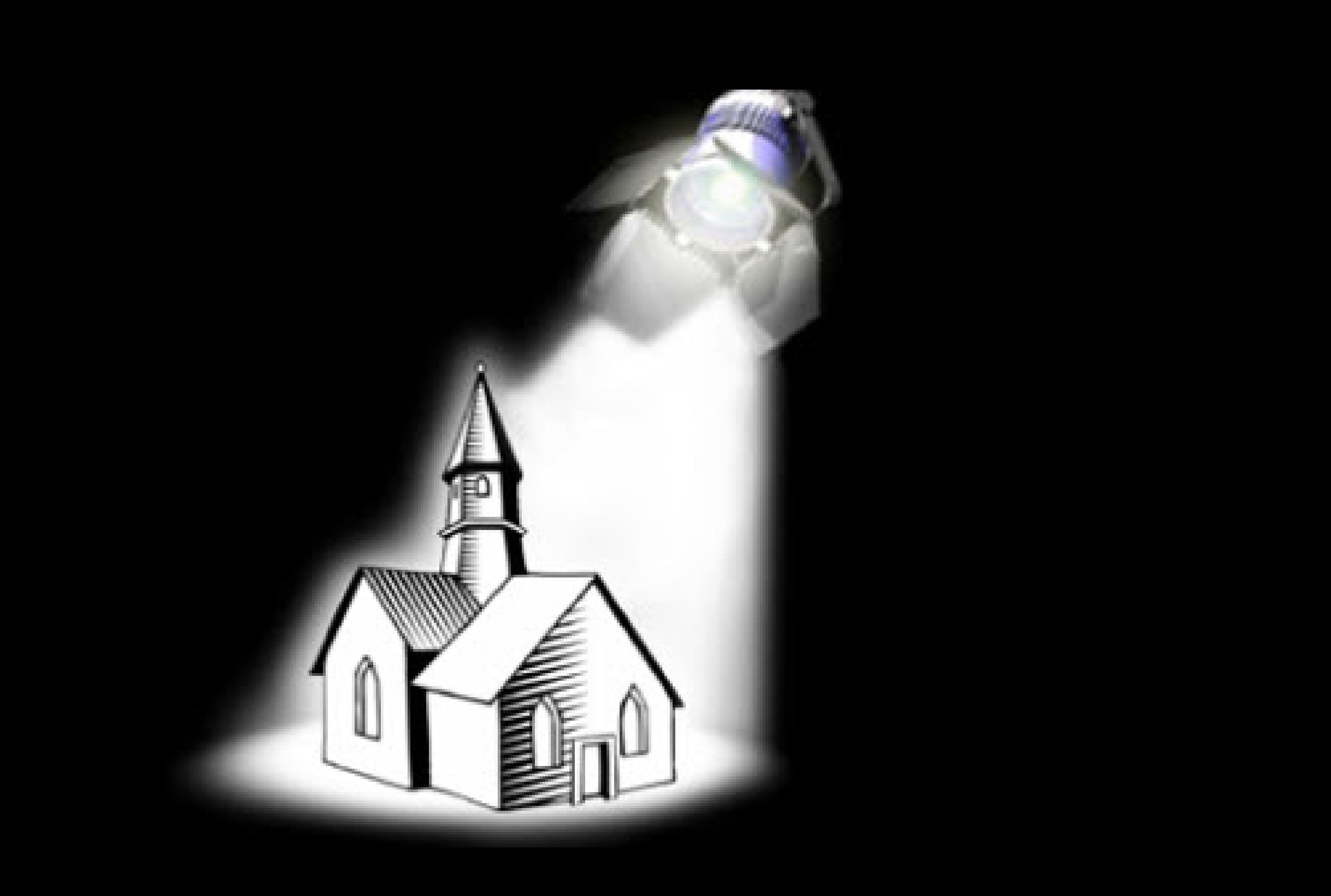 When a friend sent me David Corn’s column for Mother Jones a few weeks ago, it was like getting hit with bad news I already knew. Sooner or later, someone was going to peek behind the first serious Seventh-day Adventist presidential candidate, and begin to scrutinize the Seventh-day Adventist Church. Corn gave a fairly accurate description of historical eschatological narratives about how the Papacy, through the agency of the United States government, is gearing up to persecute and condemn those who keep the seventh-day Sabbath.

There are sharp differences among us how we regard such teachings. Some want to be forthright and forceful about them. The most blatant example was an offshoot church in Florida that put full-page ads in newspapers across the country explaining in painful particularity our Papal enemy and anticipated persecution, while erecting billboards blaming the antichrist for changing the Sabbath to Sunday. Those who are sending out millions of pulp-paper copies of The Great Controversy fall into the same category. Hit them with the truth, the say. Leave them without excuse. Who cares whether they like us for it? Let these writings be spread like the leaves of autumn, even if they end up merely annoying people and filling up recycle bins.

Another group can’t bring themselves to discard any detail of The Great Controversy scenario, but they wince when it’s displayed in its nakedness. They’d say it’s a matter not of what we believe, but how we present it. Persecution by Roman Catholics is going to happen, but that’s the meat of the message, an advanced truth, and we shouldn’t reveal it to people until they’ve digested the milk. Let them accept Jesus, let them see that the Sabbath is clearly the Bible’s day of worship and that Jesus is coming again, and only then will we tell them, cautiously and warningly, this esoterica about our archenemy in Vatican City. Like the Scientologists with Xenu, we ought to reserve this truth until a person is firmly rooted in the faith and less likely to question it. No, we’re not anti-Catholic, they say, just distrustful of Catholicism, and they hope that others will be able to understand this nuance.

There are others in our denomination whose faith doesn’t rely on these frightening prophetic narratives. These people love the Seventh-day Adventist church, too (although those in the previous two categories might dispute that), but see these ideas as leftovers of our 19th-century past. They believe that Jesus will return, but reject the idea that these fearful prophetic scenarios are essential truths. Just as other Christians have left behind their anti-Catholic or anti-Semitic prejudices, so must we. The old name-calling is unbefitting of followers of Jesus Christ.

I remember back in 2012 hearing Krista Tippett interview Ask Mormon Girl blogger Joanna Brooks, and Joanna saying how Mitt Romney’s prominence had made Mormons feel apprehensive, wondering how many more humiliating questions they’d have to endure about, for example, Mormon underwear. That’s how some Seventh-day Adventists are feeling right now. They wince when Donald Trump spits out the name of the church as though it were an insult, or when David Corn reveals our official paranoia. They’d just as soon Dr. Carson would fade away before he calls too much attention to our oddities.

But others are excited about the opportunity. Evangelist Doug Batchelor, while admitting there will be negative press originating with “other antagonistic denominations” (note that detail—it says much about us), says this “might prove to be a great evangelistic opportunity… as long as we know how to defend what we believe and explain why from the Bible.”

The problem, of course, is that much of our eschatology isn’t very clear from the Bible alone. It relies on the writings of Ellen White—which is why we’ve not distributed millions of copies of the Bible in major American cities, but millions of copies of our eschatological handbook The Great Controversy. Beyond what’s written there, we’ve woven onto the fringes an informal narrative that ranges from curious to downright nutty, from invisible barcodes on our hands and foreheads, to torture chambers in Catholic church basements, to Jesuit infiltrators in our denominational leadership.[1]

I don’t know where Dr. Carson comes down on any of these matters, though I suspect that should it become necessary for him to make a more detailed statement about his Seventh-day Adventist faith it will be artfully crafted by his election team[2], just as Mormonism was finessed so that Mitt Romney could try to pass as an evangelical Christian. And in one sense, I wish that what people find out about Seventh-day Adventists wouldn’t matter: that Dr. Carson could be judged by his suitability for leadership, not by the religious label he wears.

Of course, it’s not just the perversity of the press that has brought Ben Carson’s religious beliefs up for examination. One of the odd incidents in this story is that Dr. Carson, himself a member of an unusual and misunderstood religious movement, hasn’t been shy about criticizing another faith, one held by millions around the world. Did he suppose that no one would turn around and look at his religion of origin?

We Seventh-day Adventists may be uncomfortable with some of the things that are written about us, but perhaps we ought to remember that we’re getting no better than we gave. Fellow church members, should you hear something about us that you don’t like, such as people saying we’re a cult, just remember that for a century and a half we’ve been calling the Papacy the antichrist, the beast, and the whore of Babylon. We’ve described other Protestants as Babylon and apostate Protestantism, while we sang their hymns and copied their programs and ideas, and via Ellen White even appropriated portions of their books and called them prophecy.

Just in case some reporter looking for information on Ben Carson’s denomination stumbles upon this Spectrum column, let me attempt to tell you the truth about who we are. Seventh-day Adventists are conservative Protestant Christians. Read through our fundamental beliefs, and you’ll see that we are solidly orthodox in the central doctrines we share with other Christians. We can truthfully repeat the Apostles Creed. But it is also true that stories about the Papacy’s plan to persecute those of us who worship on Saturday are a solid part of the writings of our 19th century prophet. And yes, a substantial number of our people accept every word of that account as though it were history written in advance. They insist that it is a selling point for our faith, which is why our evangelistic meetings will feature topics about the Papacy’s intentions as explained by prophecies in Daniel and Revelation.

But you also need to know that there are many in the Seventh-day Adventist church who see these stories as remnants of a frightened, nativist past. We believe that the Lord has graciously led us from a religion of fear and exclusivism to one of peace in Christ, and harmony with other believers. We have no interest in blaming Roman Catholics. We extract from the prophecies larger principles, such as that religion mustn’t get entangled with government, and no religious leader should exercise too much power in the civil realm. No one can deny that our denomination has an impressive track record of supporting religious liberty and the separation of church and state. Still, some of us believe that this accusatory eschatology has distracted from the work of the gospel, and from bringing blessings to the world. And as for bringing blessings, we have a bragworthy record of merciful work through our hospitals, disaster relief agencies, and schools.

For my part, I don’t really care if you like us. But I’d want you not to mischaracterize us, not paint us all with the same broad brush, nor conflate us with the angry, judgmental parts of right-wing fundamentalist Christianity. I’d want you to know that I and many like me don’t live in a conspiracy, but in the peace of Christ.

It would be nice to be able to say that we are on our way to some resolution on these differences of understanding among ourselves—if not agreement, at least mutual respect—but at this moment I see no clear path to that. Ours is not a broad church, but a divided church, and Dr. Carson’s candidacy may contribute to exposing that division, as did the vote about women’s ordination this past July. Right now, I don’t think any of us are sure how to resolve our past beliefs into a peaceful present, much less plan together for a continuing productive future. Pray for us.

[2]This has already begun. From Corn’s article: “Asked by Mother Jones whether Carson believes in the Sabbath persecution prophecy and thinks Seventh-day Adventists will at some point be considered criminals, arrested by government forces, and ultimately sentenced to death, a spokesman for the candidate said in an email that this was ‘not a fair interpretation at all.’ He added, ‘Trying to twist a person's faith is quickly becoming a favorite sport of the left. That kind of intolerance exposes who they really are, not what they claim to be. He never mentioned prophecy, you did.’” In fact, this is certainly a fair interpretation, and Dr. Carson can be heard speaking about prophecy on youTube.