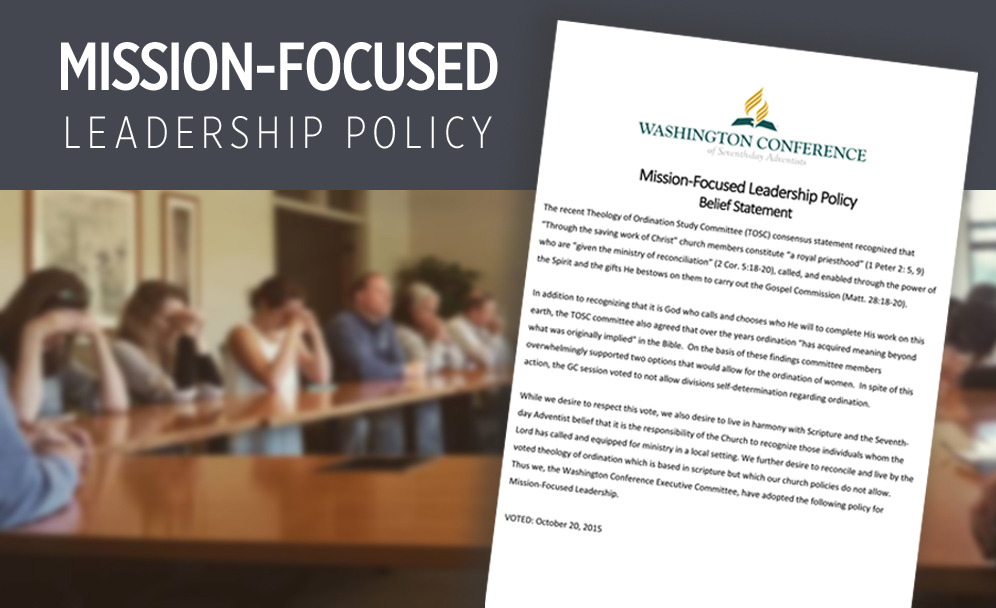 The Seventh-day Adventist Church in the State of Washington adopted a policy Tuesday, October 20 that grants new rights to commissioned ministers within the Washington Conference. During a regularly-scheduled meeting of the Washington Conference Executive Committee, leaders approved a Mission-Focused Leadership Policy that provides what the committee has described as "a practical approach to allow commissioned ministers to participate, along with ordained ministers, in the new General Conference Total Member Involvement (TMI) initiative, to fulfill the Gospel Commission commanded by Christ Jesus in Matthew 28."

TMI is a key part of General Conference president Ted Wilson's second term agenda, announced during the General Conference Session in San Antonio Session, and fleshed out during the 2015 Annual Council meetings held in Silver Spring, Maryland this month. Taking the initiative seriously for the Washington Conference has meant a change in policy that will allow women (who in most territories within the Adventist Church are commissioned rather than ordained) to perform many of the tasks previously restricted to men.

A statement of belief accompanied the Leadership Policy, reading in full:

The recent Theology of Ordination Study Committee (TOSC) consensus statement recognized that “Through the saving work of Christ” church members constitute “a royal priesthood” (1 Peter 2: 5, 9) who are “given the ministry of reconciliation” (2 Cor. 5:18-20), called, and enabled through the power of the Spirit and the gifts He bestows on them to carry out the Gospel Commission (Matt. 28:18-20).

In addition to recognizing that it is God who calls and chooses who He will to complete His work on this earth, the TOSC committee also agreed that over the years ordination “has acquired meaning beyond what was originally implied” in the Bible. On the basis of these findings committee members overwhelmingly supported two options that would allow for the ordination of women. In spite of this action, the GC session voted to not allow divisions self-determination regarding ordination.

While we desire to respect this vote, we also desire to live in harmony with Scripture and the Seventh- day Adventist belief that it is the responsibility of the Church to recognize those individuals whom the Lord has called and equipped for ministry in a local setting. We further desire to reconcile and live by the voted theology of ordination which is based in scripture but which our church policies do not allow.

Thus we, the Washington Conference Executive Committee, have adopted the following policy for Mission-Focused Leadership.

The document released by the Washington Conference and embedded below is the first of its kind, extending to women the same rights and privileges that had long been unavailable to them because of their second-tier credentials. While women will continue to receive commissioned minister credentials instead of ordained minister credentials, they will no longer be restricted in the tasks they may perform.

If you reply to this article, please: