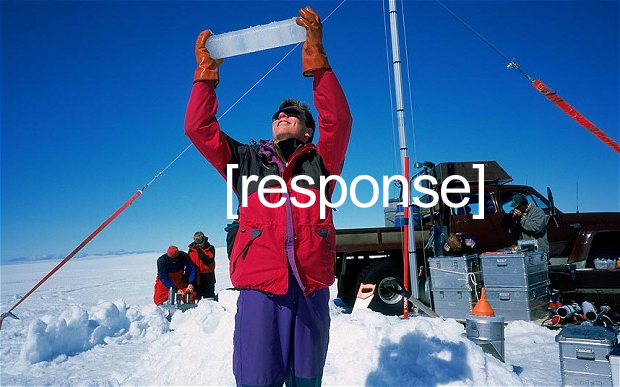 On September 11, Spectrum published "Perspective: Clarifying 'Understanding Ice Core Science,'" in which D. Stuart Letham and Col J. Gibson provided a robust critique of an article in the Record on Ice Core Science and the age of the earth. The article generated many comments, some critiquing the conclusions Letham and Gibson reached in their article. Below, the authors respond to the comments their first article generated. -Ed.

The authors (Letham & Gibson) original aim was to state clearly, and simply we hoped, our understanding of what we saw as an obvious misunderstanding of science with respect to ice cores. We did this to assist readers who wanted to learn what science has to say about ice cores, and to observe how that relates to the Bible as we understand it. We make no claims to being theologians.

That means, of course, that this reply impinges on our (both readers and authors) understanding of science and also the Bible (scripture).

First, however, we want to thank all who read our article and particularly those who responded with further comments to advance our mutual understanding of the subject and its implications.

Second, we want to reply to the more significant issues raised and further clarify, where necessary, and again - as we see it. Several thought we had “not gone far enough,” but going further risked impinging upon our personal beliefs, and also on other areas not addressed in the original article, and probably best addressed in a subsequent article or articles. At this stage we intended merely an attempt at clarifying science and its aims and what it might have to teach us specifically with respect to ice core research. In doing this we also sought to understand how well it reveals nature (God’s second book) as we accept both reveal the same authorship--God. Consequently, we expect both to be in agreement. We did not set out to attempt to harmonise, but we were happy to note harmony where we thought it existed.

The “old” earth--recent creation concept we mentioned, generally was not well received by respondents. However, it is of course not new. The basic idea (i.e. Genesis 1:1 was separated in time from Creation Week) was accepted by some of the early leaders of the Adventist Church about 1900 and a two-stage creation identical to our suggestion is accepted by many Adventists today (G. Pfandl, J.Adventist Theological Society, Vol. 14, 176-194, 2003). Some of the respondents were clearly YEC (the entire planet and the universe created 6 to 10,000 years ago), while others may have been theistic evolutionists. Because we invoked the Gap proposal, one respondent considered we were conceding ground to evolutionists. Hence, we would like to make our belief position clear. We are creationists and do not accept evolution, theistic evolution, or any form of evolution; we accept the biblical creation week of literal days, 6 to 10,000 years ago.

In the original article, we gave the date for Creation Week derived from Biblical chronology as about 6,000 years before the present (BP) based on the recent recalculated date (3959 BC) of Ashton (J.F. Ashton, in Evolution Impossible, Master Books, AR, pp. 195-196, 2012). However, some uncertainty remains and 6-10 thousand years as used herein may be preferable.

Some brief comments on specific issues or statements relevant to our original article made by respondents follows:

1. The Importance of Timing of Creation.

Several respondents stated that this issue was not important to their personal faith. Maybe so. However, we were saying that we thought it very important to some, especially science-literate young people. The teaching of YEC as scriptural that the entire planet and even the universe were created 6 to 10 thousand years BP has caused many familiar with science to reject the entire Bible, and consequently salvation and the Advent (i.e. Second Coming of Christ) message. If the idea that the great ice sheets that once covered northern US/Canada and Eurasia were caused by a post flood ice age is added, the exit from the church could be even faster. Such views on the flood are not biblical, as we see it, and therefore have no scriptural foundation.

One respondent questioned:
a. If there could be any connection between the end of the Ice Age and timing of life in Eden.
b. He said, We don’t know where Eden was located, and
c. We don’t know the extent to which it was affected by glaciation.

Let us address (b) first:

Modern geology suggests that the Garden of Eden was located at the top of the Persian Gulf based on the identification of the dry river bed of the “missing” river Pishon (C. Hill, Perspectives on Science and Christian Faith, V. 52, 31-46, 2000). Although uncertainty remains, it seems likely that the Garden of Eden was located in or near the Euphrates Valley (Iraq). We can now rephrase question (c) thus: At this location during the Ice Age, was climate markedly different from that at this site at 10,000 years BP when global temperatures were normal and similar to those of today?

To approach this question, general comments about glaciation in the Northern Hemisphere provide a basis.

Only Canada and the northern part of U.S. and Eurasia were covered by the ice sheets (2-3 km thick). However, all of the Northern Hemisphere appears to have been severely affected by glaciation. Thus, climatic events revealed by the Greenland ice cores were also evident in stalagmites in China, Borneo, Turkey, Israel and Oman. Transition from the glacial maximum to early Holocene caused rises in sea surface temperature (SST) in both Eastern and Western Mediterranean (8-10°C), in Arabian Sea (3°C) and South China Sea. Studies of past cave temperatures in Israel revealed an 8°C rise caused by the above transition.

The Younger Dryas (YD) was the terminal phase of the last glaciation and its sudden onset and short duration (about 1,200 years) render its effects easy to distinguish. Identification of pollen species in lake sediment cores taken during this cold period revealed very marked changes in the species present. Hence the fall in temperature (about 7-8°C) was sufficient to greatly modify plant ecology. Similarly, the cold, dry and windy weather of the YD induced replacement of pine forest by tundra in Southern Alaska and caused biological changes in the Cariaco basin of Venezuela. Because of proximity to the likely location of Eden, the region between the Jordan Valley and the Euphrates merits special consideration. Studies of lake sediment cores revealed that it had become largely a desert-like steppe caused by the cold and drought of the YD. Much of the woodland had died and some rivers disappeared. However, a global temperature rise of about 7°C, probably in only a decade, induced the end of the YD at about 11,700 years BP. Subsequently temperatures gradually rose further and stabilised at about 10,000 years BP. With increased rainfall, the above area then became highly fertile, agriculture developed and the region became part of the Fertile Crescent.

The above observations show that glaciation revealed by ice cores markedly degraded climate and adversely affected plant growth generally in the Northern Hemisphere. Based on lake sediment cores, the answer to rephrased question (c) is affirmative. The glaciation would have devastated the flora of the region adjacent to, and perhaps including, Eden. Since the YD glaciation caused collapse of society and adoption of a mobile hunter-gatherer life style in the Levant and Syria (region north and NE of Israel), the effect on life in Eden could have been equally severe (question (a). Cessation of glaciation seems to be a prerequisite to initiation of edenic life. In Eden temperatures after Creation were “mild and uniform” (P&P p. 61). The ice core record shows that the earth experienced such conditions after about 10,000 years BP, which thus could be the probable date for the biblical creation week. This accords with Scripture.

Prior to this time, the earth experienced a severe ice age (glacial maximum about 23,000 years BP) with very variable temperatures and the ice age lasted for about 95 thousand years with varying intensity.

3. The significance of Pollen and Bacteria in Ice Cores Prior to 10,000 years BP.

In writing the article, the authors purposely avoided mention of these organisms in ice cores prior to creation week. Perhaps mistakenly, we felt it was not necessary as it would only incite more controversy by bringing into focus the question of life before Creation Week. In any case, our article discussed ice cores in relation to the occurrence of the biblical creation week, nothing more. However, because pollen and bacteria were invoked by respondents as a criticism of our old earth-recent creation concept, we will make a brief comment for what its worth.

Yes, pollen does exist in ice cores. We recognise that. But the level of pollen in some deep ice cores is so low that it is difficult to quantify and does not make a convincing study; some bacteria appear to occur in ice cores but some can be derived during the drilling process. However, pollen clearly occurs in lake sediment cores dating back well before 10,000 years and the plant species can be identified. Hence, some plants appear to have grown on the earth prior to the biblical time for creation week and there is good evidence that cyanobacteria, which also photosynthesize were also present. The earth needed a source of oxygen and God designed plants with the ingenious enzyme system to convert water into oxygen, a system still imperfectly understood by science. In this way, the atmosphere was enriched in oxygen in preparation for humans.

The pollen in lake sediment cores prior to 10,000 years BP calls into question YEC beliefs, but it does not contradict Scripture, which is silent about the presence or absence of plants on the earth prior to creation week. Their presence would not negate creation week when a great diversity of plants and animals were formed and man was created in God’s image.

D. Stuart. Letham was awarded a PhD (Birmingham, UK) in organic chemistry in 1955.  His subsequent research work included the purification, determination of structure and synthesis of the first naturally occurring cytokinin, compounds that induce cell division in plants.  They occur in plants at the level of 1 part per billion (see Letham, Annual Review of Plant Physiology 1967, 1983).  He is the author of over 190 refereed papers in biochemistry and plant physiology journals.  He retired from the Australian National University 1992 as Professor Emeritus.

Col J. Gibson worked in accounting in industry for a decade before taking an academic position as a senior lecturer in accounting at universities in Australia, New Zealand, and the University of South Pacific (Suva, Fiji).As a natural naturalist from an early age he has been active, as a hobby interest, in helping many professional scientists in fieldwork, and now in retirement still acts as a citizen scientist, which includes field observations and bird photography.

Both authors have discussed the Science/Creation subject for the past few years and thought it was time (obviously after reading a particular Record issue as noted in this article) to put some of their thoughts on this interface into the public arena for others to consider and comment.