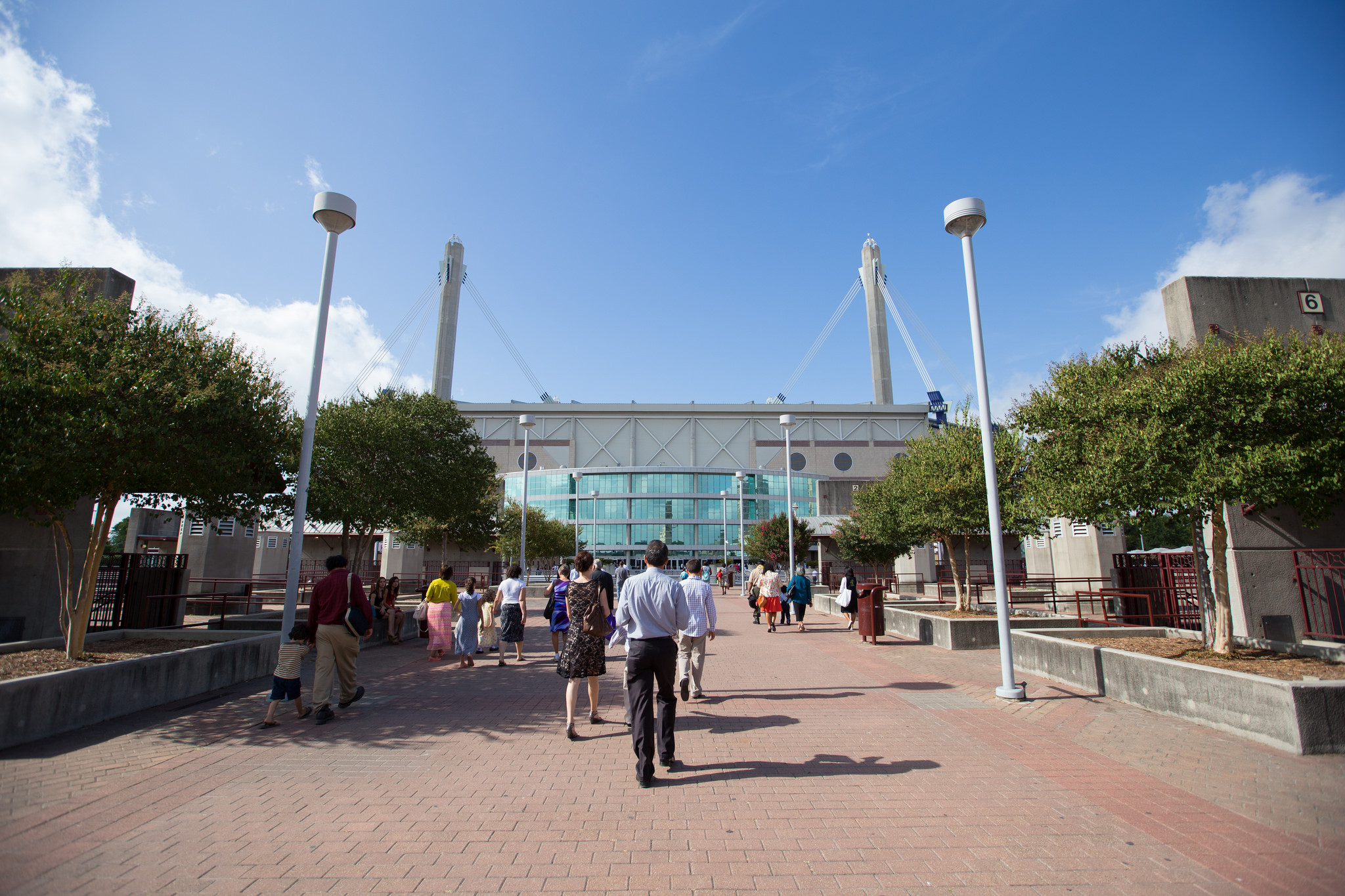 I sat in my black pencil skirt, pink lace blouse, blue-black suit jacket, and let the tears run down my face unchecked. I could hear behind me the cheers and “amens” and “hallelujahs” from the nice Caribbean family we had met earlier that day and with whom we had swapped stories and slices of pizza just a couple hours before. I had considered trying to hold onto my composure or maintain some type of professional façade when the music started playing and the voting lines started forming and the obvious result hung as-yet-unnamed but potent in the air. But I couldn’t. I had long ago learned that my eyes tend to leak despite my best efforts when they had a mind to. And besides, I was tired. It had been a long day of impassioned speeches, a day filled with perspectives and testimonies about female pastors (although none, from my recollection, from any female pastors), and I had lost the desire to pretend that it didn’t matter.

It's a dangerous thing to care about this result if you are female working for the church. It can be evidence of your rebellious spirit, your pride, your desire for man’s affirmation instead of God’s. This shouldn’t matter, you are told, if you really believe your calling comes from God alone. You need to just keep your chin up, keep on doing what you’ve always done. But I was tired. And I couldn’t quite understand, if ordination is fundamentally the human recognition of who the Holy Spirit has already called and equipped, how a world of people who had never met me could say without a shadow of a doubt that my gender makes my calling impossible. And so as the results were read out and the people around me cheered I sat a little taller, tilted my tear-stained face a little higher. You might not have heard my story before, I thought, but please, even as you celebrate, see me now.

It’s been two months since the assembled delegates of the General Conference of Seventh-day Adventists voted against divisions having the authority to decide whether or not to ordain women to the gospel ministry. In some ways, it’s been a time of confusion. Some have taken this to mean that currently serving female pastors should step down, or even that female elders should be asked to resign. Unions and divisions worldwide have had to write clarifying statements to their constituents explaining that this vote merely affirms current policy, and that no policies were actually changed. I cannot count the number of times I’ve been asked by church members “what does this mean? Can you explain this to me? So what happens now?”

In other ways, however, these months have been a time of clarity. For all the talk of the “sweet spirit” permeating the General Conference meetings, for me and many others who were  there or followed the proceedings from afar, this Session served to highlight the deep issues that divide us in the Adventist Church. We are divided on the issue of women’s ordination, yes, but we are also divided on our hermeneutics, evangelism, eschatology, and even our mission. Is the Adventist church primarily called to be a holy example of obedience? Are we primarily called to be ushers for Christ’s return through our evangelistic efforts? Or are we primarily called to be faithful witnesses to the coming Kingdom of God through lives of grace and commitment to justice and opposition to the forces of Babylon?

In the aftermath of San Antonio, these differences seem to culminate in perhaps the most pressing divide in the Adventist church at the moment: our differing understanding of where power lies. As has been mentioned before in numerous articles, the Adventist church has had a unique organizational structure for over a hundred years now, set in place to help mitigate against “kingly power” being amassed by those at the top. In our current structure, there is a natural gap and potential tension between the division and union level, with the unions fundamentally accountable to their constituents (in terms of money and votes), and the division accountable to the GC (in terms of money and appointments), which is in turn accountable to the assembled delegates of the world church. What was evident at the General Conference is that the Global South, which has predominantly (although not universally) adopted a form of Adventism that is anti-intellectual and fundamentalist, has now risen to power. It is deeply ironic that for many of us third– or fourth-generation Adventists in the global north, the Adventism that we find so suffocating now is the indigenized version of the very Adventism our ancestors exported decades ago.

With this shift in demographics, many of the areas in Adventism that used to have power now find themselves without it, and thus the question is asked: what should those who find themselves on the progressive side of an increasingly conservative and fundamentalist denomination do? Should we allow the will of the majority to dictate on matters of conscience? Why should we stay connected to a church we no longer feel represents us? I have heard these questions and others like them from numerous young adult friends and church members over the past few months. In the last two weeks alone, I have had two separate conversations with individuals who shared with me that while they still felt committed to their local churches, they want nothing to do with the global structure post San Antonio. In conversations in homes, offices, hallways, I hear murmurings that the only way forward is a split. That we must continue on our path, and let the divide widen as it will.

I can see the power and potential in this direction. In many ways (aside from the potential logistical nightmare), it would be easier for our health and sanity to be with like-minded people, people with whom you can build synergy and momentum and a sustainable alternative vision of Adventism without energy being diverted into infighting and impassable divides. In many ways it makes sense that our focus should be on our local contexts, for that is where the deepest forms of community can be built.

Yet I am resistant to this solution as well. I love being part of a global church, and have deep roots in the global south. I believe that a largely overlooked dynamic at play in San Antonio was not just the current cultural differences between the global north and south, but the post-colonial push-back from a part of the world tired of being patronized, now flexing its muscles. In some ways, the motion on the table was an attempt to sidestep this power struggle by asking for the freedom to decide this issue regionally. But the patronizing relationship between north and south could still be seen in comments on the floor, where well-intentioned individuals would remind the global south that we once allowed them to have polygamy, when we first brought Adventism to them, and appeal for them to return the favor of allowing for cultural variances (leaving unsaid that they should learn from our example); and in post-decision analysis that painted entire continents as backwards, uneducated, and easily manipulated.

This dynamic is not unique to the Adventist church. I have a friend whose job takes her in and out of UN meetings and discussions, and she sees a similar pattern in their debates on issues like gender equality and individual rights and freedom of conscience. The global north passionately crusades for these issues – the global south resists the implied sense of superiority. In the resulting impasse it can feel pointless to try and continue the conversation.

So what should a progressive Adventist, passionate about living in light of the coming Kingdom do? If we care deeply about issues of justice, equality, liberation, transformation, and building Kingdom-oriented communities, where should we go from here?

On the one hand, I believe that the stance that many conferences and unions are taking is the right one. They are saying that while they love being part of a global church, and while they take the church’s collective decisions seriously, on matters of conscience they must follow where they see the Holy Spirit leading. Power that is not used is lost, and in these matters the unions are using the power given to them by their constituents.

On the other hand, however, I fear that within our unions and conferences are many liberals and progressives who want to write off our connection to a world church as unnecessary at best and contaminating at worst.  But I believe doing so would be a mistake, and that we would be turning our backs on an incredible opportunity.  If we as progressives claim to care about the world as it is, and to work towards the transformation of communities as an example of the world as it could be (and will be in the Kingdom to come), then isolating ourselves in like-minded groups will be a betrayal of that mission.

The world is facing global challenges. Challenges of unsustainable lifestyles and environmental degradation and growing inequality and cultural polarization. We see the implications of isolating ourselves in affinity groups in the gerrymandered political landscape of United States. Liberal areas get more liberal, conservative areas more conservative, and never the twain shall meet. But the issues facing us are too great for just one group to tackle. We will not solve them if we do not find ways to work across barriers of culture and geography and ideology and even history, colonial or otherwise.

Adventists are uniquely poised to be a witness to what a diverse group of people focusing on mission could look like. Of the 238 countries and areas of the world recognized by the United Nations, Adventism has a presence in 216. We have built systems of education and healthcare that have met real, this-world needs (and although I am aware of the way education has been a colonizing tool, it has also been a vehicle for liberation – see the story of the Stahls in Peru). Despite the deep divides between us, we are intimately connected. We share a common, recent history. We share practices that uniquely identify us. We share a commitment to the Sabbath that helps define our past, present, and future. In an age where information is everything, we share contact details – I have countless stories of traveling overseas, needing help, and finding the phone number and address of a local Adventist church that opened its doors and arms wide.

Yes, there is a lot that divides the Adventist Church. But there is also a lot that could potentially hold us together. Our increasingly polarized and divided world is facing challenges that increasingly necessitate that we work together. Belonging to a global Adventism despite its challenges can force us to have the kind of open, authentic, reciprocal, bridge-building conversations that the world so desperately needs.

This article was written by a female pastor in the Seventh-day Adventist Church who asked that her name be withheld.