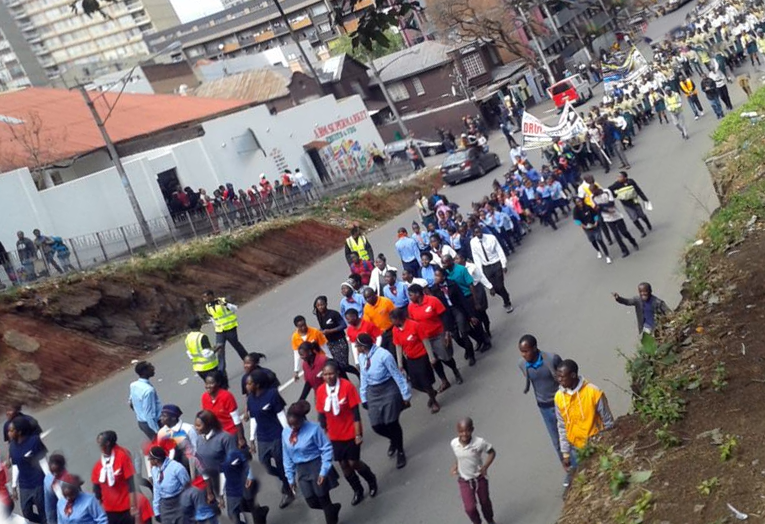 A crowd of an estimated 1,000 Seventh-day Adventists marched through the streets of Johannesburg, South Africa over the weekend to demonstrate against waves of violent crime in suburbs of Hilbrow, Berea and Yeoville. Voice of America (VOA) reported that murders, muggings, robberies, shootings, drug abuse, and the killing of police officers nationwide have risen dramatically, and the Adventist Church in the region marched for peace and divine intervention amid the surge in violence.

VOA listed some particularly heinous crimes--among them, the murder of a man who refused to surrender a cell phone to a mugger, and the rape of an infant--and cited a murder rate five times higher than the 2013 global average. In the Spring of this year, South Africa made headlines for a series of violent attacks on migrants from Somalia, Mozambique, and Zimbabwe, saying that the "kwerekwere" (foreigners) were stealing South Africans' jobs. Photographer James Oatway captured startling images of the stabbing of Emmanuel Sithole, a man from Mozambique, as onlookers watched the attack. Sithole died from his injuries. As is the case in Europe, South Africa has struggled in its response to a migrant influx, and xenophobia has bred violence.

Johannesburg Adventist Church youth director Velile Moyo told VOA, “We have discovered that there is so much crime that is going on in these large cities. There is also so much of drug trafficking and many people now have lost their morals because of the drugs that they are partaking in almost everyday.”

Adventists have declared a three-week crusade for peace that will include the feeding of those in need of food, family life consultations, and a health expo with free health advice. The church hopes to address the root causes of South African Violence.