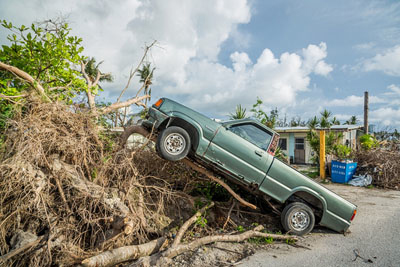 Saipan, Commonwealth of Northern Mariana Islands (CMNI) - A team from North American Division Adventist Community Services (ACS) Disaster Response has been working in Saipan the past week helping with the relief efforts after typhoon Soudelor hit the island on August 2, 2015.  Originally a small category 1 typhoon, Soudelor gathered strength and slammed into the island with unexpected force. Most experts agree that the damage on the island was made worse by several tornados that were inside of the typhoon and ripped paths through several neighborhoods destroying most of the homes in their path. More than 1,000 homes were destroyed by the storm and over 8,000 families have filed damage claims with the Federal Emergency Management Agency (FEMA) to completely rebuild, or repair major or minor damage. Despite the damage from the storm, not a single life was lost during the disaster. Recovery will be a slow process as most of the 48,000 people on the island four weeks on are without access to electricity and 50% have limited access to fresh water in their homes.

FEMA and the members of the Volunteer Organizations Active in Disaster (VOAD) invited ACS to set up and manage a warehouse in Saipan to help with the distribution of materials to those affected by the storm. NAD ACS Disaster Response Director Sean Robinson was joined by Charlene Sargent, ACS Director for the Pacific Union Conference, Cathy Kissner, ACS Director for the Rocky Mountain Conference, and Dan Weber, NAD communication director, who acted as the ACS Public Information Office. It was agreed ACS would train their island counterparts – Pastor Matt Mattzela of the Saipan Central Adventist Church and Dr Warren Creed of the Saipan Adventist Dental Clinic who are leading the Saipan ACS response assisted by Ray Aldan acting as the Volunteer Warehouse Manager.

Upon their arrival they met with FEMA, the local VOAD and the majority of the humanitarian organizations responding in Saipan, to coordinate an organized disaster response. With the help of local government officials, ACS was given space to set up a warehouse where materials donated to the disaster response could be organized for distribution. On August 27, 2015 a group of teen volunteers from AmeriCorps helped to unload the first delivery of donated goods into the warehouse. These donations were then quickly sorted and made available to all of the humanitarian agencies working on the island for distribution.

ACS, in partnership with the Adventist Development and Relief Agency (ADRA) was also able to locally purchase cleaning supplies and butane fuel. With the help of local church members they distributed them to 500 families via a temporary distribution center set up at the Seventh-day Adventist Dental Clinic. ACS also operated a mobile distribution center in the Saipan village of Kagman in cooporation with Southern Baptist Disaster Response who were distributing food.  For the ACS team on the ground, despite having to deal with a lack of electricity and limited access to clean water, seeing the responses from those affected by the storm is empowering.

"Sometimes we do not realize just how many people are relying on our service and ministry," said Sean Robinson, ACS director for Disaster Response for North America. “Saipan church members have been empowered as they have seen lives change as they served in their community after this disaster through distribution and multi-agency warehouse.”

Robinson started training local volunteers almost as soon as he landed and was supported by ongoing warehouse consultancy from Sargent and Kissner.  Early this week it is expected the CNMI/ Saipan ACS team will take over the management of the ACS warehouse so that it can continue to serve the community during the long recovery process.

Dr. Warren Creed, the interim medical director at the Seventh-day Adventist Dental Clinic, has been elected to serve as the chairman of the local VOAD and will work with other Saipan based humanitarian agencies to provide organized relief efforts over the coming months.  Pastor Matt Mattzela will represent ACS to the Long Term Recovery Committee (LTRC).  ACS is also planning to become more involved in the long term recovery efforts by rebuilding homes destroyed by Soudelor, a process that will take several years to accomplish.

Dan Weber is the Communication Director for the North American Division of Seventh-day Adventists.