How Multicultural is the Adventist Church? On The General Conference Presidential Election II 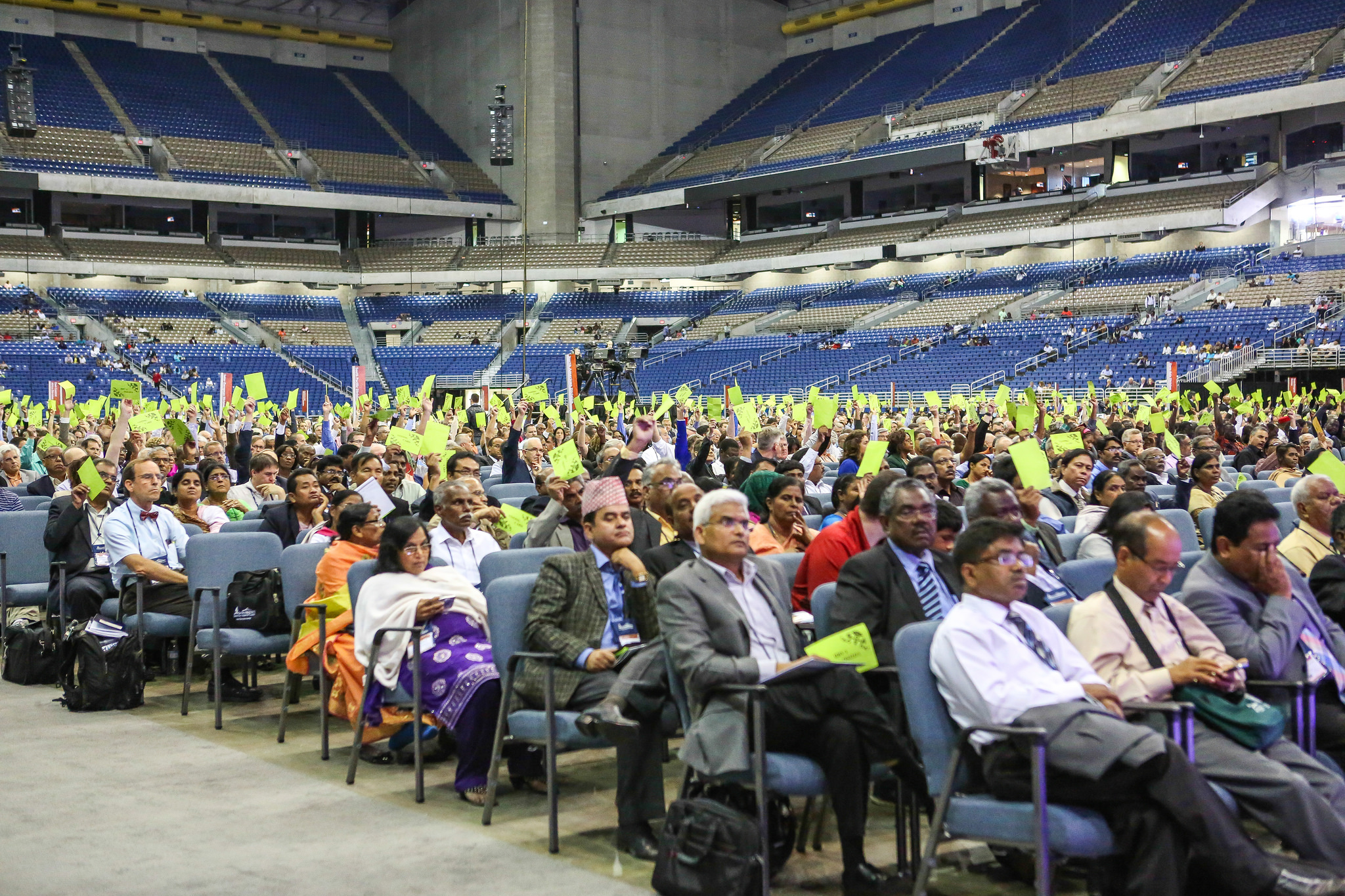 The “Global North” (NAD, EUD, TED, SPD) had 544,059 members in 1962 and these four Divisions reached 1,501,425, or just 8 percent of total membership, in 2012. This numerical shift has been still more visible in the 2015 General Conference Session in San Antonio,Texas, for the inevitable theological and administrative impact it has had on the general Adventist ethos. No one would doubt the irreversible multicultural character of today’s Adventism, but actually few leaders—unfortunately including this presidency—are really aware of its deep implications. Westerners are living this shift as threat and Southerners as revenge. But both share a poor understanding of what cultural pluralism really means.

An increasing number of Westerners look at what happened in San Antonio as estrangement and feel disenfranchised from the church they used to love. But beyond appearances, and notwithstanding the short-sighted and self-referential cultural sensibility non-Westerners showed on that occasion, what happened at San Antonio is not a threat, but an important opportunity for Adventism to improve and refine its religious profile and message. Just as democracy is not simply about transparency in elections but of reasonable, shared and contractual governing, multiculturalism also cannot be reduced to an exotic, colorful and paternalistic General Conference evening “parade of nations.” We are guiltily cultivating a burlesque multiculturalism that is the twin sister of today’s Adventist theological literalistic trend, as well as a presumed “enlightened” progressive Adventism which resists it. We will never manage to increase the meaning and value of our end-time theological message if we keep cultivating (Westerners as well as Southerners) such a superficial and non-dialogical cultural pluralism. And we will never improve our enormous multicultural potential if we refuse to abandon, or at least to responsibly work out and limit, our strong and compulsive trend of theological literalism.

How did we manage to embrace and cultivate such a poor multicultural awareness? We can discern four historical stages:

·         The first one could be called a “Homogeneous Mono-culturalism” (1863-1900). In this stage, and after abandoning a restrictive shut-door theology, Adventism opened itself to others. These others who were invited to join the church were theologically different, but culturally identical, to us because they also moved with and remained attached to an Anglo Saxon mind-set. After joining Adventism, they just kept and reinforced this by giving it a theological justification.

·         The second stage could be called a “Heterogeneous Mono-culturalism” (1900-1950). In this stage, and after embracing a world-wide perspective in mission, Adventism went out from the United States and established strongholds in other territories – but still within the Western world (Australia, Scandinavia, continental Europe). The Anglo Saxon component in Adventism still remained predominant but was no longer alone. Here we find, for instance, a new European – and in particular a German – Adventist ethos that emerged for the first time, and whose artisan was the controversial Ludwig R. Conradi (1856-1939). Conradi was a nationalist, not a multi-culturalist, and for this reason he didn't help the global church to update itself to this new situation but just to create a European alternative to the original Anglo Saxon Adventism. Conradi died (1939) when Adventism was almost fifty per cent non-Western, but he lacked (as does the average European Adventist today) a multicultural awareness to visualize an opportunity.  At this stage Adventism stopped being exclusively Anglo Saxon but paradoxically radicalized even more its Western monolithic profile.

·         The third stage could be called a “Non-dialogical multiculturalism” (1950-2015). In this stage—already visible in the early 1950s—the traditional Western strongholds represent for the first time only half of global Adventism. The church had already changed demographically but nobody seemed to realize the consequences of this cultural shift. And, from the 1950s to the 21th century, not only did non-Western Adventism remain voiceless but, paradoxically, it was imposed upon and passively accepted a theological agenda not its own: the defense of Biblical literalism, a kingly understanding of spiritual authority, an unbalanced apocalyptic mind-set and numeric obsession with mission. Non-Western Adventism sold its rich and complex soul for a “lentil stew” of cultural acceptance. But the numbers are incontestable and irreversible. Adventism is already a South-Hemisphere phenomenon. And theologians and administrators have not facilitated this cultural passage. The players are unaware and unprepared. The final result is an asymmetric, non-dialogical multiculturalism. It is composed, on one side, of a numeric, euphoric and unsophisticated theological majority and, on the other side, of a besieged, self-proclaimed enlightened and fearful Adventism. The vast non-Western Adventist majority (92%), which rightfully made its voice clearly heard at San Antonio, may be perpetuating the traditional Adventist cultural impermeability—but with the wrong agenda and with disputable motives.

·         The fourth stage starts symbolically at San Antonio and we could positively call it a “Dialogical inter-culturalism” (2015-    ).  Nietzsche has taught us in his “Untimely Meditations” (Unzeitgemässe Betrachtungen) that true history is not what we describe the past to be but rather that which we make for the future. We can't be satisfied with the simple reversal of our traditional Euro-centric mono-culturalism, one which embraces an ideological and revengeful non-Western culturalism, rooted in the Southern hemisphere. It is for the well-being of all Adventism that we need to simultaneously accept, respect and promote a humble and dialogical Western Adventism, with its specific needs, as much as Western Adventism must respect, promote and defend a balanced and dialogical non-Western Adventism, with its own vision and horizon.

How could we promote a true, honest and open inter-cultural dialogue within Adventism? The main question is not whether we are multicultural or not, but rather which kind of multiculturalism are we really defending and promoting?  According to Francesco Remotti, a renowned Italian cultural anthropologist of the University of Turin (in a book presented some time ago here at our Adventist theological school of Villa Aurora), a true inter-cultural dialogue can exist only if we understand cultures within three modulating characteristics:

·         First, “Complexity”. No culture should be reducible to one category, motive or stereotype. And this threat doesn't come uniquely from the outside but also from within when, in the name of a supposed dynamism and greater functionality, internal alternatives are overlooked and cut off, making the system apparently more efficient but in reality poorer. The value of cultural systems is not measurable by the strength of “immediate” results but by the capacity to maintain the structural complexity and the “time-mediated” results they facilitate in long cultural cycles.  It's almost impossible to positively value the richness and complexity of other cultures if we have destroyed the complexity within our own cultural system.

·         Second, “Relative Incommensurability”. No culture can grow healthy if it detaches itself from the outside world with the intention to better preserve its various specificities in the name of an internal uniqueness. It's true, nobody outside will ever fully understand the meaning of what group life is within. But it is also true that – detached from an external eye and critic – what grows inside often disfigures and distorts itself rather quickly. For this reason a healthy culture doesn't consider the external eye as a threat but rather a necessary ally. A culture that can't be criticized is also a culture that can't be improved. A culture that is absolutely incommensurable (i.e. that can't be compared to other cultures), condemns itself to be meaningless and transitory.

·         Third, “Translatability”. Not only should we allow others to analyze the type of Adventism we represent but we should also be capable of translating pure internal mechanisms and experiences in an understandable language for outsiders. Instead of hermetically closing ourselves in exclusive symbols, codes and registers – undecipherable to others – we should ourselves create a language and religious forms intended to be read by others from cultural areas different than our own. Translation is not just a linguistic instrument to communicate better. Translation is, above all, a cultural and theological way of being that, in making us accessible to others, allows us to become meaningful and incarnated historical beings.

The critical assessment of our church multicultural vocation, after these three characteristics suggested by Remotti, shows that we still have a very deficient multicultural structure. One more attentive to letting every cultural component express its values and convictions as a “cultural solo” rather than to promote true interaction, dialogue and consensual decisions. But particularly this brief critical assessment evidences that the newly elected General Conference president, even if he is not imputable for have been re-elected or for having the sympathy and trust of a majority of Adventists, certainly is imputable for not having done anything important to make the church grow in cultural awareness and dialogue. Cultural awareness is also an important and decisive component of an enlightened leadership because it represents a help for dealing with other more specific religious and theological topics.

But we must avoid passing absolute and definitive assessments of this presidency. Because, as in the parable of the two sons (Matthew 21:28-32), symbolically this presidency is saying “I will not go.” But perhaps later on, as in the parable, he will change his mind and will finally go and face all these challenges listed here—without ideological obsessions, manipulatory strategies and for the real benefit of the global Adventist family.  For accomplishing this he should have good and wise counselors and listen to them. Does he have them now? And if he has, would he listen to them? Or is he just choosing people like himself, people who limit themselves to reaffirm what he believes and plans? History will decide. Strong leaders tend to reaffirm their convictions and follow a-critically their updated obsessions. But leaders can also change. Does the General Conference president need to abandon his personal convictions in order to be more open and relational with the various sensibilities and needs present in our world-wide community? Not necessarily. A president can and must maintain his own convictions. The only thing he should remember is not confusing his convictions with the well-being of the general church. A president who completely identifies his personal profile with the destiny of the church he leads is simply reckless. A president instead who is able to go beyond his own convictions and “suspend” them for a moment—in order to identify himself with the needs of a part of the membership he serves—becomes ipso-facto a trustworthy president. And that is what the Adventist community is desperately needing today, a president for all Adventists.