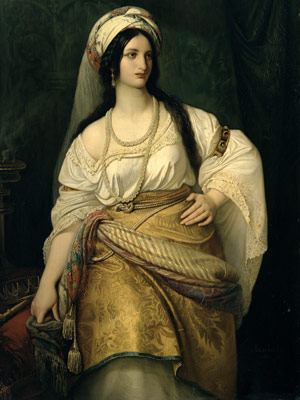 Esther is a book that captures the imagination.

I say this without hard data, without the studies that link Esther and theological imagination, but I can speak to my own experience as a young girl. I was fascinated with the idea of Esther—a young woman who won a beauty pageant of sorts, but who was really an undercover secret agent on a mission from God.

A quick perusal of commentaries and even the adult Sabbath School quarterly leads me to believe that we still love this idea of Esther—this covert mission, undercover version, subversive story.

Yet the longer I spend with the book of Esther and the more I probe its story, I don’t see an undercover agent confidently working to save her people. I see a young girl caught up in a political whirlwind, likely confused and unsure, who doesn’t have an answer to a question that begs an answer:

Where is God? Are we, the Jews, still His chosen people?

One of the greatest challenges for Bible scholars, theologians, and readers of the text alike is this question: where is God? In the book of Esther, God’s name is never mentioned. Not once.

But there are plenty of other words mentioned. Words like “king,” “queen,” “military,” and “banquet” appear repeatedly. It is clear that there are major players and powers present in the book of Esther, but they don’t seem to be of the God-variety.

And this very well could be intentional.

After being in exile for several generations, King Cyrus issued a decree in 539 B.C., allowing for Israelites to return to their homeland. The books of Ezra and Nehemiah tell the story of the land being resettled and the people of God making a fresh start in their homeland.

But Esther and her cousin Mordecai were not among those Israelites who returned. There were plenty of Jews who had settled comfortably into their new surroundings and did not return home. And this is where the story of Esther picks up.

What does it mean when God has exiled you, but then you are returning the favor?

I don’t want to presume about the lives of Esther and Mordecai. They could have been devout Jews, but they could have also been indifferent towards God, too.  After all, if one contrasts the story of Esther with the book of Daniel there are a few marked differences: no one prays in the book of Esther, no one has an apocalyptic vision, there is no mention of Esther’s dietary restrictions in the king’s court, and there doesn’t seem to be concern for Torah, or the law.

This all makes an impression on the reader; there is literary deftness in causing us as readers to feel the Exile; we sense the absence of God. We feel the oppression of an empire who issues edicts calling for genocide and rips women away from their homes to be sex-slaves for a powerful monarch. Where is God in this?

And yet, even in God’s absence, God is present.

Let that sink in: God’s name doesn’t have to be mentioned, God doesn’t have to have followers who are being perfectly obedient or interested in a covenant relationship with Him, God doesn’t even have to get the credit for how the story turns out for Him to be fully present and intimately involved.

This is the part of Esther’s story that I failed to comprehend as a child; I thought it was all about Esther doing great things for God! I was caught up in the subversiveness of the story, the high stakes drama, and the chutzpah of the heroine. But I missed the point of the story completely.

I could write for days about the workings of God in the book of Esther—about His undercover actions, about His subversions, about His will being carried out even without anyone knowing it. I could write about the literary devises in the story—the great reversal of fortune—how the Jews are saved and the tables are turned, which, by the way, is so like our God. I could write about how history is the long story of God’s work in the world, even when we cannot see it or if we choose to leave His work unacknowledged.

There is so much here to savor, so much to celebrate about our God.

Because this point does bear repeating: This mission work is not ours, it is God’s. It is His mission, His work.

Or we can recognize that this story is all about God.

Even when it seems that He is absent, even when we don’t sense His presence or understand His plan.

Even when we look around us to the empires that we live under, to the horrible suffering and violence that is waged by the powerful against the powerless, God is still present.

Even if we think that the word missionary is out of vogue or if we flat out want nothing to do with Him, the story is still all about God.

And that is what I’ve discovered about the story of Esther.

That is what I have come to discover about our sometimes hidden, never absent, always present God.

Alyssa M. Foll is a staff chaplain at Adventist GlenOaks Hospital in the Chicago suburbs. She is an elder in the Burr Ridge Seventh-day Adventist Church and enjoys reading, creative writing, and swimming.