The Theology of the Tax Exemption

The Theology of the Tax Exemption 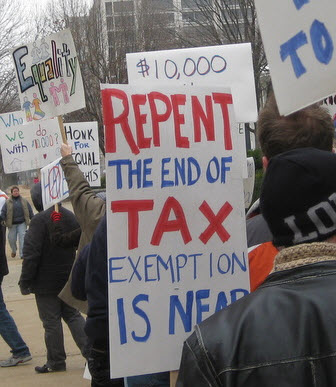 Conservative Christians reacted predictably in response to the Supreme Court’s decision in Obergefell that ruled same-sex marriage constitutional. There was hand-wringing about the pseudo-persecution of Christians and faux outrage in response to fake articles that confirmed Evangelicals’ worst fears. Many conservative critics of the decision opined that this decision will lead to the curtailing of the freedom of religion in this country. It is true that the advent of nationwide same-sex marriage creates flashpoints between religion and the government where none existed before. It is true that Christian universities may have to deal with housing issues and that churches that hold out their space to the public for weddings may have to amend their policies. However, very few if any are asking the question of exactly how these flashpoints actually affect the constitutional right to the free exercise of your faith. It seems that the conversation jumps from mentioning these thorny issues to the conclusion that the right of free exercise is being curtailed.

The reason why the argument skips steps is because there is a logical, legal and theological fallacy occurring in the ether around this issue. To state it bluntly – the free exercise of religious institutions (churches, schools, etc.) will not be affected by the allowance of secular same-sex marriage. The government forces no minister or pastor to perform a ceremony that violates their conscience. No church will be forced to hold a wedding on their premises that violates their beliefs.[1] What frightens many who raise this objection is the loss of the charitable tax exemption. Currently, those who are deemed charitable organizations (and most churches fall under this designation) are not taxed. In return, those institutions cannot do things like discriminate in terms of their services, nor can they advocate for particular candidates in elections.[2] Advocates of “traditional” marriage believe that religiously affiliated organizations could lose their tax exemptions or lose the access to government funding now that the Court found in favor of a constitutional right to same-sex marriage.

From a legal perspective those who hold this view are correct. It is quite likely that courts will rule against churches who attempt to have their cake and eat it too by attempting to receive a government subsidy while shirking the terms by which the government grants that subsidy. In 1983 the Supreme Court ruled that the tax exemption is a subsidy to charitable organizations in the amount of the tax itself and then stated that there is no argument, “that First Amendment (Free Exercise) rights are somehow not fully realized unless they are subsidized by the State."[3] Although this case was in reference to political advocacy, it is not a stretch to believe that the Court would extend this principle to religious institutions that seek to discriminate against unions that the state has deemed constitutional. According to the Supreme Court, it is not the responsibility of the state to donate financial resources to those who do not share the state’s principles.

I believe the Court is correct in its constitutional understanding on this issue. What bothers me more, however, is the lack of a spiritual consideration amongst Christians who weep and gnash their teeth over the potential loss of a tax exemption. Has Christianity in America become so materialistic that we conflate our freedom to worship with our ability to save a dollar? I was under the impression that Christians are people of faith, and yet we show so little faith in the ability to continue to function without the benefit of a charitable tax exemption. We serve a God that we claim is omnipotent and omniscient. If that’s true then it seems mighty silly to complain about a lost tax exemption on the one hand and claim that God owns the cattle on a thousand hills on the other. That does not mean that there are not legitimate financial concerns. Unfortunately some of our ministries in some areas of the country could not function without government funding. It is true that some churches would have to close their doors without the money they save in the tax exemption. It is also true that giving itself might decrease when members are no longer able to claim their tithe and offering on their tax returns. I just think that says so much more about us then it does about America, the courts, or the free exercise of religion. We should ask ourselves where we are as Christians when we no longer believe that God can provide for our charities and keep our church doors open. As an institution we should be questioning our worth when the financial support of our members is dependent on the government benefits they receive instead of the blessings of a covenant with God.

Those who react like Chicken Little in the face of changing social mores on the question of same-sex marriage are wrong on both counts. As a constitutional matter, there is very little effect on religion as a result of this decision, and no right to a charitable tax exemption or government grants. As a spiritual matter, there is no theology of the tax exemption. What we do have is a commission to introduce the world to a Savior who longs for a relationship with each of us. Maybe we should focus on that and growing our measure of faith instead.

[1] Unless, of course, that church holds itself out to the public as a place where anyone can come and conduct a wedding.

[2] The prohibition on candidate advocacy is the Johnson Amendment passed in 1954. Liberty Magazine recently held an online roundtable on the constitutionality of the amendment. For more on the removal of tax exempt status because of discrimination see this discussion of the Bob Jones case.