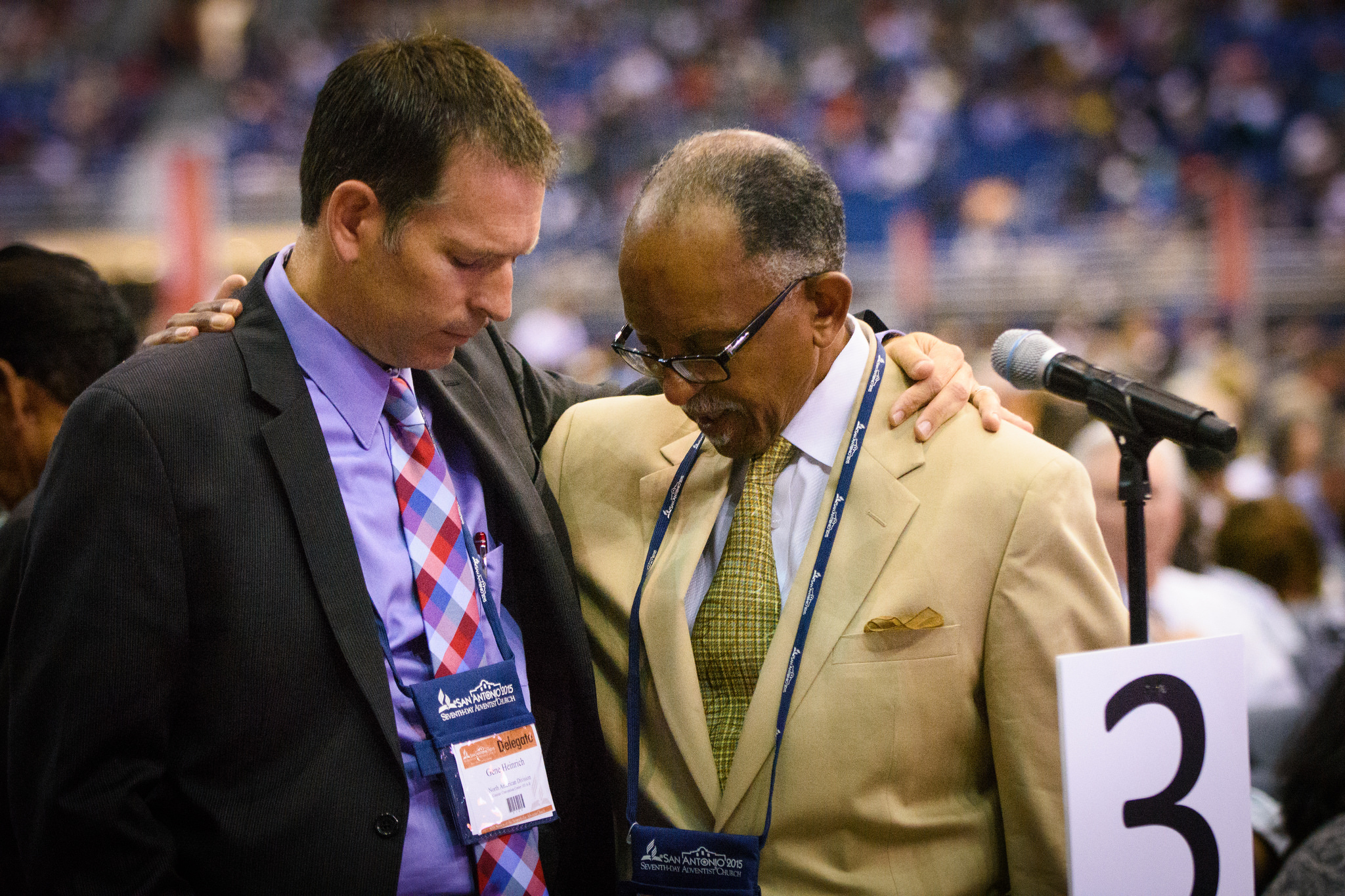 I’ve been distracted lately. From some really important realizations.With all the many tweets and articles that came out of San Antonio, with all the reports of the quarrels about voting procedures and mechanisms, qualified leaders and rules of order, better wordings and loaded phrases, and with the discouraged reactions on one side and the ecstatic praises on the other, I’m afraid I’ve been angry and have forgotten five pivotal realities.

Reality #1: We exist in a vast profusion of cultures.
Our worldwide church fully represents this extensive diversity. There’s nothing we can do about it, short of creating thousands of independent, domestic groupings, and even then we’d still be divided locally.

It shouldn’t surprise us that within these cultures we hold hugely different opinions and perspectives that have been forcefully shaped by the societies in which we live. Nor should we be surprised that we all consider our frames of reference to be more valid and authoritative than anyone else’s viewpoint. Our cultures influence the clothes we wear, the food we eat, the understandings we have for specific words, the “necessities” with which we surround ourselves, the music we prefer, the side of the road we drive on, and certainly our theological and political postures.

Some of our cultures are hierarchical and authoritarian. Other cultures place a higher value on individualism and democratic equality (even in the way we cast votes). Some cultures prefer an unbroken attachment to their historical heritage (witness the recent U.S. discussion about the Confederate flag). Other segments esteem creativity, innovation, and change. If we live within a culture that speaks definitively of knowing God’s will for all, we will approach people differently than if we live in a more secular society (contrast the differences in Islamic countries and in modern-day Europe). It’s not a matter of one culture being correct and all others being wrong. Diversity is simply a matter of reality.

We always will take differing stances. To expect it to be otherwise, or to be bewildered by the resulting outcomes in an international, male dominated forum, virtually deprived of youthful voices and insights, is to reveal a woeful disconnect with the realities of the world in which we live.

Reality #2: We all interpret.
The days of priestly officials dictating the scope, meaning, and purpose of someone else’s words have receded into obscurity as surely as the hand copied Latin Bibles that once were chained to medieval pulpits.

Our scriptures now exist in thousands of versions and paraphrases with the precise purpose of helping us understand those passages in words we comprehend. And even when we’re speaking the same language, our understanding is interpreted through our own experience and culture (consider the hundreds of hours spent on the theology of ordination by competent scholars, sincere theologians, and committed Bible students, only to come to widely differing conclusions, along with the discerning awareness that the issue is cultural, not theological).

Interpretation is a fact of life. We interpret when we choose “better” English words with which to express our fundamental beliefs for all languages and dialects. I may prefer “global” to “worldwide,” or “human” to “man.” You may prefer yet another expression, or feel that less inclusive language is more historical. We interpret what Jesus meant when He gave us an evangelistic commission. We probably differ on how much “good news” is necessary for evangelism actually to qualify as gospel evangelism. My health routine may include items you consider peripheral or even unnecessary. We interpret the original messages of great works of art when we view them in museums. A pianist interprets a 200 year-old piece of music for a performance.

We don’t have the original sources of the Bible, nor do we have irrevocable cliff notes written by the authors explaining what they meant. We interpret. It’s a reality.

Reality #3: We are selective.
We tend to pick and choose, sort and settle, nominate and elect only those things and people we find to be of the same mind. It doesn’t bode well for inclusivity, but that’s the way we usually operate.

Our sermons broadcast our reliance on selected authorities. Our bibliographies reveal our biases. We quote texts that agree with us and disregard passages that present different perspectives. Ignoring Paul’s counsel to clothe ourselves with “compassion, kindness, humility, gentleness and patience” (Colossians 3:12), and Peter’s guidance to “show proper respect to everyone” (1 Peter 2:17), we applaud pronouncements with which we agree, as if the one speaking were repeating universally held absolute truths, and we hiss and boo even well-respected leaders who rise to support a contrasting perspective.

We prefer to call this reality “discernment” when we’re the ones doing the selecting, but we call others “critical” and “judgmental” when they contradict us in exercising the same dynamic. We pretend to know people’s intentions when we assign to them the worst of motivations, often declaring that those others are moved by beastly powers or anti-Christ designs. We often favor sensational conspiracy theories from the Internet or the hallways, to well grounded, deeply researched, rational explanations.

It’s not likely that we all will turn a corner on such unfortunate partialities at the same time, but shouldn’t we at least respectfully question presuppositions, clarify sources, and dispute conclusions that arise from trite stereotypes and overdone clichés?

Reality #4: We are woefully inconsistent.
We don’t always come across as well reasoned or balanced. Even with as many as 28 applications of our faith on the table one should be able to expect a high degree of evenly expressed narration and consistent commentary.

But not so! We prefer to use the words “unity” and “uniformity” only when the “right” word better elucidates the point we want to make. We vote to expunge certain phrases from our doctrine about Ellen White lest anyone accuse us of forming our beliefs from extra-biblical sources, but then we announce from the pulpit that our belief in a recent, 6,000 year-old creation is based on what Ellen White says. We point out the Bible’s recommended capital punishment for people of different sexual identity, but forget to mention that the same penalty is commanded for Sabbath breakers (Numbers 15:32-36) and disobedient children (Deuteronomy 21:18-21).

What would have happened in San Antonio if all those delegates who signed a pledge to stay Christ-like in all their deliberations and responses had been expelled from the session when they acted otherwise? What if acting Christ-like was more important to us than exact doctrinal wordings and exclusive referendums? What if we called for prayer when we sincerely felt the need for guidance from the Holy Spirit instead of using it as an opportunity to preach our position without interruption, or as continued propaganda for our point of view, or as a pacifier to calm pent-up emotions?

What would happen if instead of being discouraged by what my friend Chris Blake calls “narrow interpretations and cultural proclivities,” we just determined to be more diligent in “the opening of the heart to God as a friend” (Steps to Christ, 93) without expectations or demands, to become more Christ-like, more respectful, and more active in proclaiming the gospel of our salvation by grace alone through faith alone in Jesus Christ alone?

Reality #5: The end is near.
It’s beyond speculation; we are closer to the end of time than we were yesterday. But it’s not the Supreme Court of the United States that dictates the nearness. The financial crisis in Greece doesn’t determine our proximity to the Second Coming. The violent actions of ISIS, Boko Haram, and Charleston are not the determinative factors that indicate an impending end. We each are closer to the end because life is tenuous.

Beloved administrator and educator, Pat Habada, went to her rest at 86 after a lifetime of courageous battles. Roy Branson was 77 when he passed away at home. Gerry Chudleigh succumbed to cancer. I had a 58-year-old friend who stepped off a bathroom scale, fell, hit his head, and died. Recently, a woman who had just retired as a local Conference departmental director, slowed to a stop in a traffic jam on a freeway when an oncoming car failed to stop and rammed into her at 65-miles-per-hour, killing her instantly. A little girl, ten years old, died in the hospital after a routine procedure. An infant in a crib just didn’t wake up one morning. Life is fragile. Life expectancy is uncertain. There are no guarantees. The end may happen for any of us at any time, without prophetic fulfillments, or signs of impending change, or warnings of our demise.

As vital as is the Second Coming hope that sustains us while we strive to cope with real life, we dare not substitute our expectation of the eventual rescue from this enemy-held territory for the thrilling assurance that God is with us now and will never leave us as we go into all the world and tell the captivating story of Jesus.

I am determined to be less distracted. Surely we all have better things to do with our time and money and energy than to travel across the world to get together to argue with each other and vehemently assert our individual interpretations, as if any of us had an absolute lock on understanding God’s will.

If we could start over again, perhaps we could begin by agreeing “to act justly and to love mercy and to walk humbly” with our God (Micah 6:8). That’s a spiritual reality we must never forget.

Stuart Tyner is a recently-retired pastor from the Southeastern California Conference of Seventh-day Adventists.