How Democratic is the Adventist Church? – On The GC Presidential Election (Part 1)

How Democratic is the Adventist Church? – On The GC Presidential Election (Part 1) 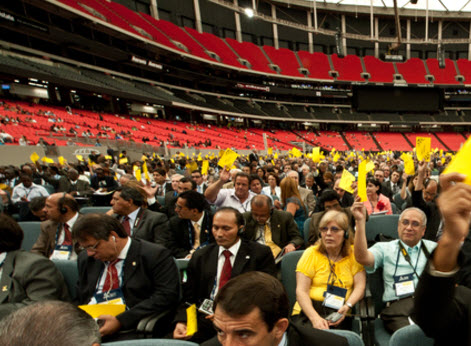 But the main question here is not whether the Adventist Church is democratic but rather what kind of democracy it incarnates. And this question is larger, more important and complex than the informal and almost trivial referendum still going on, even after the election, regarding Elder Wilson himself. By personal profile or political instinct and calculation he is identifying himself with the expectations and desires of the majority of Adventists. We cannot blame him for this. The vast majority of Adventists have chosen Elder Wilson as a GC president who really represents them. But representativeness and the right to vote are only the first step of a mature democratic system. According to Giovanni Sartori (a renowned Italian Law professor, emeritus of Columbia University -New York- and of the University of Florence), in addition to representativeness a mature democratic system needs to have and to promote three other fundamental characteristics.

The key role of church members is to participate in church life, not merely choosing their leaders during elections. Members have an obligation to become informed and to think by themselves about public issues, structural defects, institutional imbalances, historical drifts or sociological and theological paradigm shifts. They need to watch carefully how their church representatives use their powers, and to express their own opinions and interests. Membership “analytical participation” should never be confused with or reduced to membership “practical participation”. While the second one is abundantly present and euphorically promoted by this GC presidency, the first one is systematically neglected and discouraged. But both are necessary for balance in the church system. The first cannot be substituted by the second without serious consequences – as is happening right now in these same San Antonio GC meetings regarding some crucial issues on the table. If this occurs the membership is destined to become a purely blind enforcer of initiatives and programs it has not contributed to create, correct and orient toward its own needs and vision.

A vital form of participation comes through active membership in local involvement, bottom-up initiatives and non-institutional activities that parallel what happens in what we call “civil society.”  It is important that women participate fully both in local churches and administration, as lay members and as full pastors and leaders. This requires efforts by the whole organization to educate women about their democratic rights and responsibilities, improve their pastoral and administrative skills, represent their common interests and involve them fully in all aspects of the church's life. In a democratic system participation in the various proposed initiatives should be voluntary. No one should be forced to join a program against their will. Local and territory-based initiatives are vital organizations in a democracy, and democracy is stronger when believers become active and permanently involved members in such initiatives.

In a democratic system every person has certain basic rights that the administration cannot take away from them.  These rights are guaranteed by the State and international law and should be also guaranteed by the church system itself. Every church member has the right to have a personal interpretation of the shared belief system and of the administrative orientation of the church, and to say and write about them as he or she considers necessary.  No one can tell you what you must think, believe and say except through a consensual, mutual and contractual negotiation. In addition to the freedom to choose your own religion the church system should also guarantee the personal interpretation of it within that same religion.  Everyone is free to worship and practice the chosen religion as they see fit. Every individual has the right to enjoy their own spirituality, along with other members of their sub-group, even if their sub-group is a minority. There must be freedom and pluralism in the mass media. You should be able to choose between different sources of news and opinions – selecting among the various alternatives that the church system itself allows and facilitates. You have the right to associate with other people and to form and join organizations of your own choice. You have the right to assemble freely and to protest church actions. No one should support a church initiative because they are pressured or threatened by others. Democracy depends on church member participation in all these ways.  But participation must be peaceful, respectful of the church regulations, and tolerant of the different views of other groups and individuals. A democratic church is never administratively or theologically homogeneous. The free external and internal alternatives shouldn't be considered a threat but rather the guarantee of a healthy and balanced system. Excessively constrained church systems are often the prelude to self-referential and autocratic institutions.

3. A clear distinction between the Executive (government) and the Institutions

Democracy is a system of rule by written laws and established regulations, not by individuals or by ideological groups. In a democracy, the rule of regulation protects the rights of church members, maintains order, and limits the power of the Executive or other groups of power. All church members are equal under the church regulation and bylaws.  No one may be discriminated against on the basis of their race, spirituality, ethnic group, or gender.  No one can be treated arbitrarily. If you are accused or sanctioned, you have the right to know the charges against you, and to be presumed innocent until proven responsible according to the church regulation. Anyone charged with a fault has the right to a fair, speedy, and public process by an impartial committee. No one is above the law or above a critical formal or informal assessment, not even an elected president.  The bylaw is fairly, impartially, and consistently enforced, by committees that should at least be partially independent of the Executive. The rule of regulation and bylaws places limits on the power of the Executive. No Executive official may violate these limits. No president, minister, or local leader can tell a committee how to decide a case.  Office holders cannot use their power and influence to orient the membership after their own ideology. The personal convictions and opinions of the GC president or of other Executive leaders, though important and partially unavoidable, should never completely coincide with the institutional decisions and orientations. The Executive should facilitate and guarantee a clear distinction between our leaders' personal convictions, that are necessarily individual and exclusive, and the institutional choices that are necessarily general and inclusive.

The critical assessment of our church democracy, after these three additional traits as suggested by Sartori, shows that we are unduly rejoicing for a very deficient church democratic system, concentrated short-sightedly and almost exclusively in the transparency of the vote. But we are not promoting and improving the administrative maturity of the voters. More specifically this brief critical assessment evidences that the new elected GC president, even if he is not imputable for having been re-elected, certainly is imputable for not having done anything important to make the church grow institutionally and administratively. And if the GC presidency is more an administrative than a spiritual role we can easily conclude that elder Wilson has been elected for the wrong reasons. No surprise in this. It happens often in church history.  And as you can't get blood from a stone, you cannot ask from a deficient democratic system true solutions for real challenges it has been unable to diagnose and to articulate. Elder Wilson’s undeniably positive accent toward more functionality, coherence and efficiency in the church's internal life and mission – a fact tightly linked to his self-referential and unreflective conservative religious profile – could soon start functioning as a boomerang against himself and against the whole church. We are just beginning to see and count the deleterious effects of such shortsighted and divisive administrative attitudes and of such an overbearing and theologically bold profile. This GC president’s pragmatic strategies have probably increased the quantity of what we do but not certainly the quality of what we are as a world church, neither administratively nor theologically.

But I wouldn't give this presidency more credit than it really deserves. The church destiny is bigger than the GC presidential profile and wishes. By the “heterogeneity of means” we know that the end result of processes and events is never what people diligently prepare for it to be. So the final Adventist profile in South America, Europe or elsewhere will not be that of this presidency or of the Biblical Research Institute but rather what local pastors and churches, in various countries, with various difficulties and existential and spiritual suffering, are trying to build up in answer to the concrete, specific and unique needs of the people they serve. And all this in contrast to the abstract decisions that the GC in general and the GC presidency in particular, are taking in the name of a modern Adventist universal ideology.