Editorial: A Draft Speech for the President of the General Conference

Editorial: A Draft Speech for the President of the General Conference 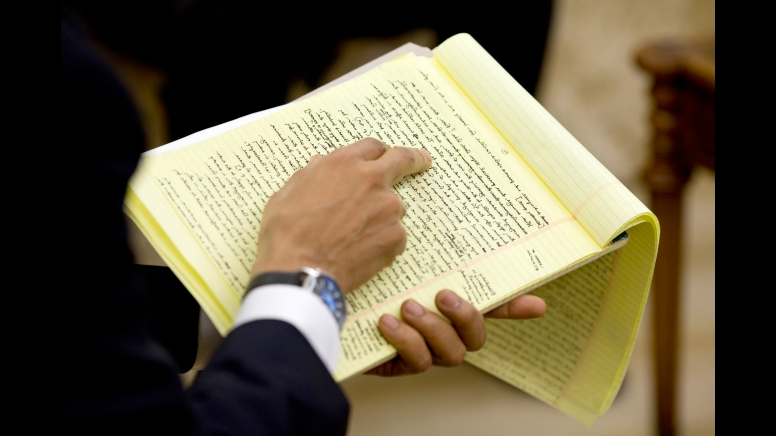 There are several possible directions Elder Ted Wilson can take in anticipation of the discussion and vote on July 8 regarding ordination. I have taken the liberty of drafting one plausible speech he could give while remaining consistent with his previously revealed priorities.

As we turn to voting on this consequential matter, let me reiterate what I said in a recent interview with the Review, “I see that the end of time is upon us.... God is working in an unusual way, and the latter rain is about to fall.” Over the last three years as the Theology of Ordination Study Committee did its work I have been careful to refrain from saying much because I have been mindful of Sister White's admonition toward the end of her life that “The president of a conference must not consider that his individual judgment is to control the judgment of all.” (9T277) This is why I said in the interview that “My viewpoint on any matter, however strongly I hold it, must ultimately be yielded to the greater purposes God has for His end-time people.”

Now that the Committee has completed its work and the time for prayerful individual study has concluded, I feel constrained by the leadership you have entrusted me with to say a few words that I would humbly ask you to consider in your upcoming vote. In reality all of us here are leaders in whatever sphere it may be. But Christ is the only true Head of the Church. (Ephesians 5:23) And what is the animating core of such headship? Again let me refer to Sister White's words: “ It will be seen that the glory shining in the face of Jesus is the glory of self-sacrificing love.” (DA20)

The Study Committee, which was made up of a wide range of members from different backgrounds, regions and pre-existing positions, after much work, prayer and study created and approved a Consensus Statement on Ordination. By definition this means that this document is what all or nearly all the Committee members agreed with. While the entire document is barely more than a page, let me read three sentences that struck me with unusual force. “Over the course of Christian history the term ordination has acquired meanings beyond what these words originally implied. Against such a backdrop, Seventh-day Adventists understand ordination, in a biblical sense, as the action of the Church in publicly recognizing those whom the Lord has called and equipped for local and global Church ministry.***While ordination contributes to Church order, it neither conveys special qualities to the persons ordained nor introduces a kingly hierarchy within the faith community.”

The Committee did not similarly agree on a singular recommendation for this body to consider. Consequently, last year's Annual Council formulated the question now before you. I am aware that there has been much effort expended by many in urging their views upon all of us. While this can be helpful it can also at times introduce confusion and perhaps inadvertent misrepresentations. Therefore, let me seek to make certain we are all clear on one thing. The question placed before you for a vote today is NOT whether any division, union or conference should be required to ordain women. No division should be under any incorrect impression that a Yes vote will require them to ordain women. While some may wish for this, be assured this is not what is up for a vote today.

As I have heard of and seen the sharp disagreements which are attending this issue I am reminded of some of my travels. I have been to the great cities of the world as well as the great fields where our greatest harvests for the Lord are taking place. I can easily believe that in many places the ordination of a woman could well make our evangelism efforts much more difficult and controversial. In other locales the secular population would find the lack of ordained women a similar stumbling block for our mission among them. My mind has been restless as I have pondered my responsibilities on this issue should I be re-elected. I have wrestled in prayer seeking for guidance and clarity.

My attention has been directed to an Old Testament prophecy that is made all the more relevant in light of my conviction that the end of time is upon us. God, through the prophet Joel, tells us “And it shall come to pass afterward, that I will pour out my spirit on all flesh; your sons and your daughters shall prophesy, your old men shall dream dreams, and your young men shall see visions. Even upon the menservants and maidservants in those days, I will pour out my spirit.” (Joel 2:28,29) I long for that day. I pray for that day. My entire life has been dedicated to hastening that day through service to this remnant church.

My dear brothers and sisters in the Lord. I have come to a conclusion which gives me peace and may be helpful for your consideration. If in these last days God will pour out His Spirit on men and women alike, and if ordination is simply the church's recognition of those God has called and equipped for ministry, then we certainly do not want to be blind like those in Laodicea and fail in our recognition of God at work. Thus, while I did not start here, I am convicted that our divisions, as they discern God calling and equipping women for ministry as Joel foretells, should be able to make provision for such recognition. Here I stand, I can do no other.

My conviction may not be yours and in no way  should you feel that I am telling you how you must vote on this issue. I fully agree with Ellen White when she said: “The exercise of force is contrary to the principles of God's government; He desires only the service of love; and love cannot be commanded; it cannot be won by force or authority.” (DA22) I can, however, tell you this as your servant: while I will continue until my dying breath to support the mission of this church and the message of Christ our righteousness in public and private evangelism, I must regretfully resign as president if my beloved church now retreats from enthusiastically recognizing and welcoming God's Latter Rain.

Ken Peterson is a member of the Spectrum / Adventist Forum Board of Directors.