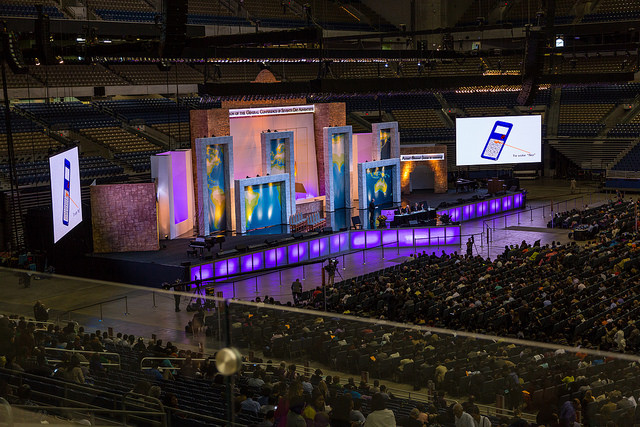 Well here I am again, wide awake when I should be fast asleep, reflecting on the day just gone: the first day of the 60th General Conference Session.

How do you survive all those committees? I am often asked.

My response is that it's like going to an opera: you sit there predicting what will happen when the proverbial "fat lady" sings!  Engaging with the actors is more fascinating than the content of their act. You try to differentiate between those who have just learned their scripts, and what happens when the cast are driven "off script." Then there are the authentic few who perform "as it comes." Equally, reading between the lines and reading the mood music is more notable than the notes.

The Alamodome is a 15-minute trek from the convention center, along a walkway that navigates several multi-lane highway intersections. The authorities marshall it well: some are engaging, others are deadpan. But hey, how do you sustain a perma-grin for so many overdressed "sports" fans of earnest complexion?

On the other hand, the presence of gun-loaded techno-hunk cops is a sad commentary on society; more obviously so when herding non-combatant parishioners. What do they expect to happen?

Music is the sport of the Adventist faithful. While most schools can scarcely rustle up a credible soccer team, they can usually field a choir.  For many of those selected to perform, this will be the zenith of their career. I confess some sympathy for those who travelled days to get here with their best robes to fill the 8:00am slot, only to sing their hearts out as a warm-up act to accommodate the tardy in an echo-filled cavern. But then, kicking off a 10-day marathon doesn't quite have the zing of a 90-minute Cup Final.

It was all a bit of a hollow formality to begin with. Song Service, Scripture Reading, Prayer the standard fare — distant tingling cymbals and sounding brasses.  I mean, bless his heart, Derek Morris, our lad from Lewisham, did his best to orchestrate the interactive reading of the grand finale from Revelation. Wonderful scripture — but words of triumph don't resonate as a prelude.

The first piece that really engaged my listening was a piano composition.  A medley that fused the hymns “I saw one weary sad and torn” with “We have this hope.”  I wondered whether the slow deliberate pace that captured the discouragement of the pioneers by Annie Smith, Uriah's sister, was back?  Or would there be a bombastic response in “oh this said they - the Blessed Hope”?  Would the pianist capture the confidence encapsulated in the 1962 theme song that is now considered our National Anthem?

Did this reflect the mood? If it did, it was a serious reflection of Adventist Classicism: weariness of journey and a somber rather than joyful response to the blessed hope.

I have to confess that Janos Kovacs-Biro, who was the first day’s morning worship speaker, is one of my favorite preachers. He has refreshing observational skills that bring life to the gospel. That he chose to reflect on trust in Jesus was a good place to start.

The business bit, orchestrated by Professor Lowell Cooper, was interesting theater in the vein of “please listen very carefully”/“we are going to control this match according to the rules”/“are we all agreed?”/“we have some very sophisticated technology to get this right, if you vote yes press 1.”

Then: “Oh dear it doesn't work, only 135 votes registered. Okay, all of those who voted, stand up, let's see if it works if you press the button standing up.”

More likely a vote to sue the supplier for malfunctioning kit.

We get to Roberts’ Rules of order — surely nothing can go wrong!

But sure enough, my eagle-eyed friend Finn from Norway asks: “Will a change in our Fundamental Beliefs as proposed happen with simple majority or require two-thirds?”

Ah ah — so will we be better off with the new mantra based on a weak majority or a compelling majority?  Or, will each side get what it wants if the bar is raised?

And the whippets are running.

The meeting’s chair is running for the cover of the steering committee. All of that supine orchestration somehow missed a chord. Do we stick to the letter of the rules or do we uphold well-intentioned spirit? Watch this space.

We introduce and welcome new Unions. Surely we should be cock-a-hoop.

But someone smells a rat. Are all these Unions kosher? Have the administrations been vetted for orthodoxy? Are we proliferating beastly administration?  The whippets are still running.

Stick to the motion, says the Professor.

Okay, so we are in the middle of all of this technical stuff, and all of a sudden we need to see this movie about how the pioneers fell out with each other and were reconciled. Were this a history class on prophetic guidance it might be interesting stuff. However, that is not the context.

It's like the guys who poked the stick in the hornets’ nest are giving instructions about calming angry hornets. I suppose most of us would counsel: don't stoke the nest, less still fain wisdom once you've done it.

Back at the Caucus, things are smooth; for the Brits it’s “whatever,” while for others it's a bit more serious.

But when the nominating committee is announced my friend Pastor Cecil, now a champion for the aged, is on his feet while struggling to read the names on the screen.  Why can the organizers not make things legible? The Chair apologizes, but Cecil has played this game for too long. He will not be fobbed off by inexperienced youngsters. “You haven't answered the question, get your act together, do something.”

Mood, music and then there's the lyrics.