The Attraction of Self-Deception 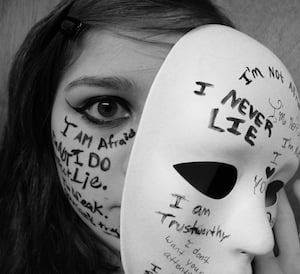 When I was growing up in the church there were various expressions used by Adventists for self-definition. Two common ones were “people of the Book” and “we have the Truth”. Over the course of my (now somewhat lengthy) adulthood I’ve concluded these two phrases intersect in the understanding of those using them. “Truth” was mostly intended as a label for correct Biblical doctrine. Thus such truths would be more applicable to answering a religious question in the American game show Jeopardy than something embedded deeply in one’s ethics.

I’m oversimplifying, of course. And I am trying to be descriptive, not snarky. But my life experience within Adventism has given little evidence that church members have a higher interest in truth seeking than the general population. Perhaps less. An attraction for many is the belief that Adventism has the important religious questions all worked out. So after you’ve gone through the initial exercise of following the argumentative narrative—and accepted the package—you arrive at a world-view stasis. Things then make sense (e.g. the Great Controversy motif), a direction has been charted for your life and you enter the “ark of safety” to proceed on life’s journey as a passenger.

Hopefully those of you with significant Seventh-day Adventist background have had a richer and less mechanistic church experience than this description. But my point is that “The Truth” too often turns out, in Adventist practice, to have little to do with an epistemology quest. A seeking for understanding. It’s more about digesting propositional knowledge.

Discovering this disconnect was (and is) somewhat troubling to me because, at first glance, one might guess that Adventists would be questers, which would connote a journey in progress. Instead I find a church that in practice is more interested in protecting a position.

Now, we all have positions—views on what reality looks like, views on what is true vs. false. Both from a religious and non-religious perspective. It could hardly be otherwise. But someone who is positioned, in my lexicon, holds his or her collection of knowledge-opinions with a tight fist, not an open palm. The tightness is to keep them from slipping away. The fist is to fend off attack.

But who would want to hold tightly to error? No one, of course. At least, that’s something we seemingly would have to agree with. But, in practice, I see tremendous resistance put up by some when a cherished position is questioned by another. Now, admittedly, that other person who questions the belief is often attacking verbally, which dramatically increases the probability of a defensive response. But even if any threat component is removed, it seems curious that it is so common for a position-holder to resist investigation.

This is, ironically, the exact opposite of the scientific method.

Ah, science. Just introduce the word and some Christians have a viscerally negative reaction. That is mostly because a small percentage of scientific inquiry overlaps religious territory and has reached conclusions at odds with historically accepted dogma. Most contentiously regarding the age of the Earth. But the scientific method, while most applicable to examining the natural world, is more broadly an epistemological approach. Here is a reasonably uncontroversial definition of the scientific method:

1.       Observation and description of a phenomenon.

2.       Formulation of a hypothesis to explain the phenomena.

4.       Performance of experimental tests by multiple, independent experimenters with properly performed experiments in an attempt to verify or falsify the hypothesis.

As you can see, using the word “phenomenon” implies the target for the method is the natural world. But if one steps back and substitutes something like “supposed truth” or “belief” for “phenomenon”, then the process has a possible wider scope of applicability. But also significant limitations. How, for example, does one “experiment” on Biblical doctrine? So let me suggest a restructuring to disengage the definition from science and apply it to truth seeking generally—outside of physical reality.

A hypothesis, in the Biblical realm, is a lot like a doctrine. It is an explanation about truth supposedly revealed by God and perhaps corroborated by logic and our own internal sense of morality. Theology reaches these doctrinal conclusions and makes other predictions about God and ethics that are extensions derived from the core Biblical data. One does not do experiments in the religious universe, but there is discourse where people, formally trained or not, try to get Truth from the material. This involves exegesis, argumentation, textual analysis, investigation into language and culture. There is nothing quite as strong as falsification in this realm, but a looser analog exists—where the theological position fails to pass muster on the various criteria used to form the viewpoint.

Foundationally the scientific method is an approach for truth inquiry. It tries to falsify positions that deserve such a judgment, it endeavors to be rigorous in its analysis and it seeks wide input from people who have relevant correlative skills and a reputation for clear thinking.

This process, in concept and practice, is available to each of us as we seek for understanding in a personal truth quest. We can read widely and critically on any topic that impacts our ethics and religious beliefs. We can learn the basic skills of logic and argumentation. But most of all, we can be open to disconfirming views. We can try not to be positioned. This is not at all the same has not having positions. It is recognizing we might be wrong and being willing to change and letting the “chips” fall where they may.

But this is what seems to be rare in epistemological discourse—not just from Adventists and not just from Theists. It appears to me to be a common human mindset.  As noted above people generally, I would argue, operate exactly opposite to the scientific method as translated to a religio-ethical truth domain. They seek confirming evidence, and read or watch thought leaders who engage in apologetics for positions they presently hold and desire to keep.

I’ve wondered about this for years. My best conjecture is that such individuals find falsification of an invested belief to be severely unsettling, perhaps triggering a slippery-slope mudslide of confusion, which might bring down the entire world-view. Also, a rigorous approach is not easy and it is time-consuming. So they shore up the cherished positions wherever they can find confirmation, regardless of quality.  This would provide presumed safety within the current view, but the risk is that they are investing energy in propping up error. And, thus propped up, there is no reason to discard it, so a life is lived by erroneous precepts.

I further postulate that such ones are simultaneously in denial that they are thus positioned. It is not a very flattering self-attribute. We all like to think of ourselves as objective and ready to change a view if persuaded. So in order to have the attractive comfort of a position currently held, we have to tell ourselves that it is indeed the superior position and we have done a commendable job of exploring its viability and the alternatives. But if we are, in fact, not doing this, then we have to engage in self-deception. And deceit, by definition, has to be unrecognized to be working.

I therefore propose a test for each of us. Ask yourself if there is anything that you now believe to be true that, if you could know with certainty you were wrong, then you would prefer not to know. It may be just as tricky to answer this honestly as it would be to recognize self-deception. But if there are such positions in your world-view, they are likely the candidates where you try to look for verification instead of falsification.