A Review of Jimmy Carter's "A Call to Action: Women, Religion, Violence, and Power"

A Review of Jimmy Carter's "A Call to Action: Women, Religion, Violence, and Power" 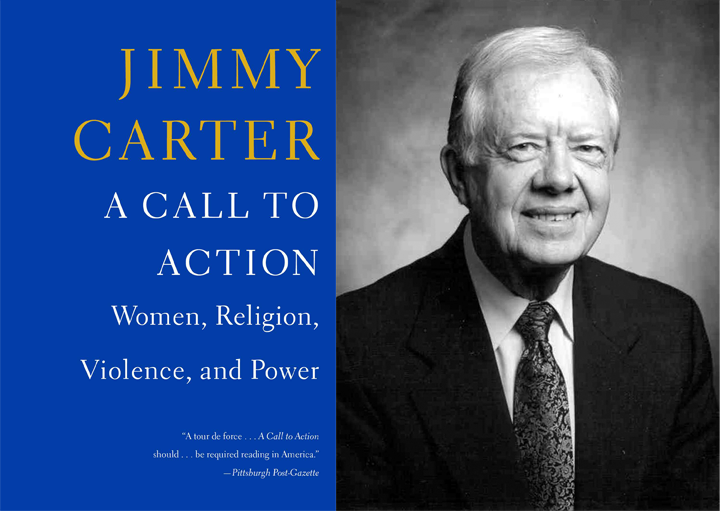 Jimmy Carter was the 39th President of the US and served as President from 1977-1981. He has been a deeply committed Christian throughout his lifetime, and was long a member of the Southern Baptist Convention (SBC). Throughout his political career, as both Governor of Georgia and President, his Christian beliefs drove his principled approach to governing and also energized his growing concerns about human rights issues, and especially women’s rights. As President he made a concerted effort to increase the number of women serving in the federal district and senior appellate courts, one of many areas in which women were seriously underrepresented.

The year after leaving the Presidency he and his wife, Rosalynn, established the Carter Center, its mission being the championing of “human rights and the alleviation of human suffering . . . to prevent and resolve conflicts, enhance freedom and democracy, and improve health.” In 2002 Jimmy Carter received the Nobel Peace Prize for his work with the Carter Center "to find peaceful solutions to international conflicts, to advance democracy and human rights, and to promote economic and social development." The writing of “A Call to Action” was partly at the urging of Rosalynn, in the hopes that the work of the Carter Center on behalf of women’s rights could gain greater exposure and support.

In the Introduction Carter lays out the main premise for the book:

My own experiences and the testimony of courageous women from all regions and all major religions have made it clear to me that as a result of these two factors[that are considered to be inferior to men and the tacit acceptance of violence in society] there is a pervasive denial of equal rights to women, more than half of all human beings, and this discrimination results in tangible harm to all of us, male and female.”

He also makes the point that for essentially all forms of human rights abuse, women are more heavily affected than men.

The topics covered take a very broad sweep that covers all aspects of women’s rights, from basic social and economic inequality, sexual assault and sex trafficking to slavery, spousal abuse, child marriage and “honor” killings. It is an extremely international view of the problems, in which the US could be a leader, but, as Carter points out, often sees the US lagging behind the rest of the developed world in addressing the issues.

More than just recounting of the many problems faced by women today, Carter also includes incisive analyses of specific issues, with data to support his conclusions. For example,

a report funded by the U.S. Justice Department found that more than 95 percent of students who are sexually assaulted remain silent, a much larger proportion than among the general public. The report’s analysis, conducted at the State University of New York in New Paltz, revealed that an institution of that size, with about eight thousand students, would be expected to have more than 1,700 female victims of rape or sexual assault during the eleven years of the study. However, only six students reported a sexual assault to the office responsible for initiating proceedings, and only three cases resulted in a campus hearing—with one male student expelled.”

Additionally, of those sexual assaults that get reported, one third are perpetrated against student athletes, according to a 2012 study in the Hopkins Undergraduate Research Journal.

Although lack of solutions to many of the problems is blamed on political and cultural barriers, Carter repeatedly returns to the role of religion.

The relegation of women to an inferior or circumscribed status by many religious leaders is one of the primary reasons for the promotion and perpetuation of sexual abuse. If potential male exploiters of women are led to believe that their victim is considered inferior or “different” even by God, they can presume that it must be permissible to take advantage of their superior male status. It is crucial that devout believers abandon the premise that their faith mandates sexual discrimination. Islamic scholars assure me that there is no justification for this discrimination in the Koran, but there are specific verses in the Holy Bible that can be interpreted on either side of the issue, and some ascendant male leaders in all faiths take advantage of the interpretation most beneficial to them.”

In addition to his own words in this regard, Carter also includes quotes from other leaders that reflect this same concern, such as the following:

It’s time for all people of faith to be outraged. It’s time for our Christian leaders to stand up and say that women, made in the very image of God, deserve better. And it’s time for us in the faith community to acknowledge our complicity in a culture that too often not only remains silent, but also can propagate a false theology of power and dominance. There is a growing understanding that women must be central to shaping solutions. . . . There is a new generation of young leaders determined to ensure the bright future of all people regardless of gender. JIM WALLIS, AUTHOR, FOUNDER AND EDITOR OF Sojourners MAGAZINE.”

Of particular interest to Seventh-day Adventist readers is Carter’s personal experience in his church, part of the Southern Baptist Convention. Much like in the Adventist Church, women’s ordination and leadership roles in the church are contentious issues, and in 2000 the leadership of the SBC decided that Baptist women could no longer hold positions such as deacon, pastor, etc. In response to this, Jimmy and Rosalynn decided to sever their relationship with the denomination with which they both had a life-long relationship. Nevertheless, they chose to remain active in their local congregation. Carter’s local congregation continues to employ a woman pastor and allows women in other roles from which they are otherwise excluded by the SBC decision. Similar to the current discussion of this same issue in the Adventist Church, the denomination is attempting to dictate to local congregations what they could and could not do in regard to the role of women in the church, inappropriately so in Carter’s opinion.

To anyone who is concerned about women’s issues, this is a must read. Jimmy Carter is a passionate supporter of women’s rights, and of human rights more generally. He provides an example of what a prominent individual can do to further women’s rights, both by example and by active participation in projects and diplomacy. It is inspiring to see one of our former presidents so committed to the betterment of human society and to the lifting up of women and others whose human rights are being trampled on.

Bryan Ness is a professor of biology at Pacific Union College in Angwin, California.