What Sundance Film Festival Feels Like to a PUC Film Student

What Sundance Film Festival Feels Like to a PUC Film Student We stepped out of baggage claim and into the cold Salt Lake City wind. After cramming inside a shuttle car, my fellow students and I set off to Park City, home of the Sundance Film Festival. On the long drive to the hotel, we got to know our driver, a local university student studying geology. One of us asked her why she chose the field, and answer was that she was always fascinated by nature. As a kid, she used to bring back handfuls of funny looking rocks from family hikes. When we arrived at the hotel, she helped us unload our bags and we thanked her for the ride.

Sundance is a different world. From the moment we stepped into the hotel lobby, the atmosphere felt different. Strangers talk about what films they saw that day, a given conversation starter in every corner of Park City. They share how they got there, where they’re going, and where they want to go. A woman next to the hotel fireplace told a stranger her plan to become an actress in Australia. An aspiring young film critic spoke with a journalist in the corner, telling him about the movies his aunt shared with him when he was a kid. Everywhere you turn, there’s a story being told, on the screen or off.

The first screening we went to, “Last Days in the Desert,” was a unique retelling of Jesus’ final days of temptation in the desert. What made the film stand out was how profoundly human Jesus seemed. He struggles with his father, converses with the devil, and is torn over the situation of a struggling family he meets. After the screening, we attended the Windrider Forum, along with students from Christian schools like Fuller Seminary and Biola university, for a Q&A with the director. Rodrigo Garcia, who wrote and directed the film, was intently focused on the story of Jesus outside of any strictly religious context. “The attraction to Jesus is very human. We connect to him, even if we are not Christian,” he explained. Garcia seemed to be opening the story of Jesus to a wider audience by narrowing into his story and character. The film was uniquely personal for a story taken from the Bible. It didn’t try to grasp the bigger picture or answer any question. Instead he presented Jesus as a child of God, someone anyone can relate to. 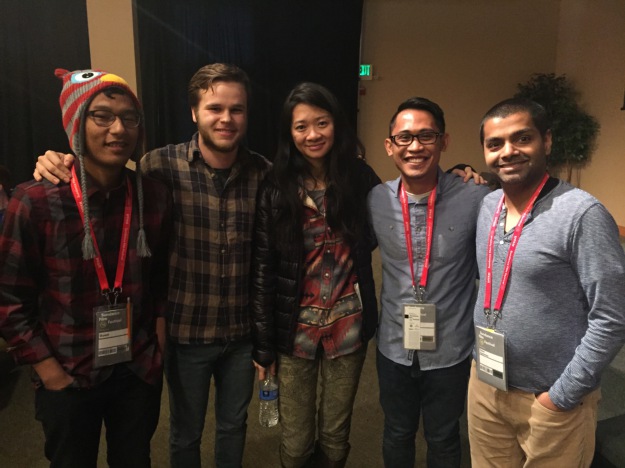 The Windrider Forum was a unique place at Sundance. Gathering in a church, groups of theology and film students from across the country discussed the films they saw through a spiritual lens. The most important experiences in my time at the festival happened here, not in a big theater, but a small church meeting hall. One evening, the forum invited up-and-coming filmmakers to screen shorts with a following Q&A. One of these was “The Other Side,” an Israeli short film by Khen Shalem. The story revolves around a boy trapped in the middle of Israeli and Palestinian conflict, looking at a very real problem through the eyes of an innocent child. When asked what he hoped to achieve through the film, Shalem was very humble. “As a filmmaker,” he said, “I cannot stop the problem. This is my way to help, to remind people of the other side of the conflict.” This was a theme through a majority of the filmmaker Q&As. Why were you drawn to the story? Why did you tell it?

One of the most profound experiences I had revolved around the film “Songs My Brothers Taught Me.” Written and directed by Chloe Zhao, it tells the story of a young man in the Lakota tribe, fixated on leaving his home on Pine Ridge Reservation but conflicted about leaving his younger sister. Directly after the film’s screening, Zhao led a Q&A in the theater with the cast and crew. When someone asked the young actors how they felt about the film after watching it, the youngest girl began to cry. Zhao explained that the lives of the characters largely reflected the lives of the actors. In one scene, the young sister walks through the burnt ruins of her home after a fire. As the film was shot entirely on location, the scene took place in the young actresses’ actual home, which had also been destroyed in a fire. Zhao found a middle ground between documentary and narrative, spending time on the plantation to know the characters and actors, shaping the film through the stories she heard.

When asking the questions “why do we tell stories?” or “why are we making films?” Zhao’s film persistently comes to mind, as does Garcia’s “Last Days in the Desert” or Shalem’s “The Other Side.” Each filmmaker expressed a feeling of responsibility to tell these stories on a deeper level. They told the stories because they needed to be told. As film students in an Adventist institution, we strive to create and look at media through a spiritual lens. This is what the films we watched at Sundance were doing. They told stories that weren’t entirely fabricated or made for a target demographic in a boardroom. Instead, these were stories that already existed, waiting for filmmakers to find them. It’s clear that Zhao made her film because she felt like she had to. The story called for her and she responded.

When it comes to media in the church, the questions I often hear tend to revolve around the content, the “what are we making?” Sundance felt like a gentle reminder of the “why?” As Christians, why are we trying to make films? Why are we telling stories? The answer is simply because we’re called to. I personally did not go to the Sundance Film Festival expecting a spiritual experience, but in the end that’s what I got. I now feel a new sense of responsibility as a Christian filmmaker to look closer at the world around me, and keep a lookout for people’s stories, from our shuttle driver to the guests in our hotel lobby. If we were called by God to love one anther, what better way to do that to listen and connect?