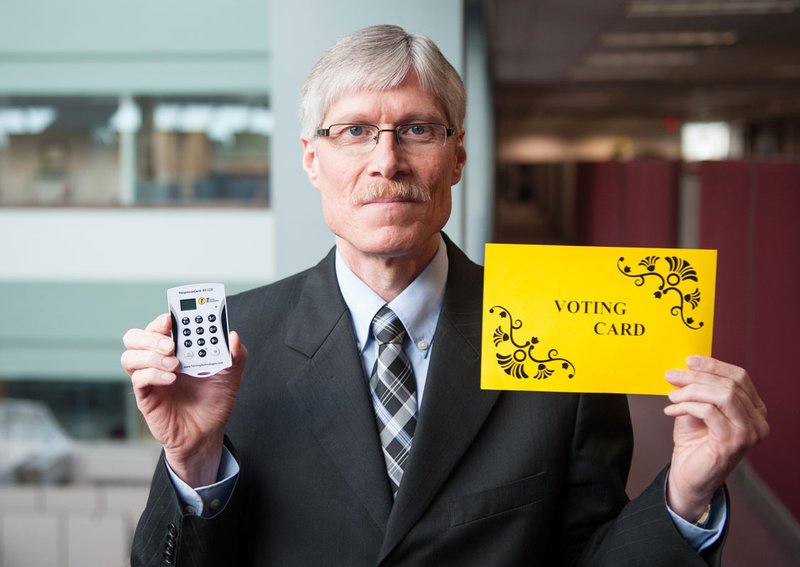 Delegates to the Seventh-day Adventist Church’s General Conference Session in July won’t hold up yellow cards to vote as they have in past Sessions. Instead, for the first time, Session delegates will vote by pressing a button on an electronic voting device.

Votes will be tallied instantly, and final results will be displayed in a bar chart on a screen.

Church officials say the use of technology will bring greater accuracy to votes and offer anonymity, potentially relieving some of the pressure some people may feel to vote a certain way.

“Technology impacts our lives in many ways, and we’re continually looking for ways in which technology can improve our systems for GC Session,” said Myron Iseminger, undersecretary of the Adventist world church.

Iseminger says the new system is more efficient. In past Sessions, votes were tallied by officials counting how many delegates held up their voting card, which took time. Sensitive votes were conducted by secret ballot, which took even longer.

Iseminger, who has worked as a Church administrator in several world regions, said the electronic system will also help people from cultures who face the conundrum between following their convictions and following their regional leader.

“I think in many cultures delegates are caught in a difficult spot because, on one hand, we encourage them to prayerfully vote their conscience, but on the other hand, showing respect to their local leader sitting nearby is also very important,” Iseminger said. “We hope that particular pressure will be removed this time.”

“We want to be transparent and fair, and I think this is a great step forward,” he added.

Session officials will rent several thousands of remote voting devices from a company that will also administer the process.

The denomination’s Inter-American Division, based in Miami, Florida, is acquiring its own voting system, and some local administrative units in North America have used electronic voting for more than a decade.

Max C. Torkelsen, president of the North Pacific Union Conference, based in Ridgefield, Washington, said electronic voting shows exactly how many people are participating in each vote, and it also affirms delegates that their vote was indeed counted.

Torkelsen served as president of the union’s Upper Columbia Conference when electronic voting was implemented there in the late 1990s. The transition away from voting cards and voice votes led to more “credibility” of the process he said, particularly for people who voted against an item that passed. “They know their vote was counted,” he said.

Constituency meeting leaders can also use electronic polling to learn how an audience feels about a discussion, even when there isn’t a vote on the floor, Torkelsen said.

About the only thing even slightly controversial about electronic voting was that it cost money. Some systems can cost several thousand dollars. But Torkelsen says he thinks the expense was worth it “from the very first time.”

“It raises people’s level of confidence of the vote,” he said.

He said the nearby Oregon Conference now owns an electronic voting system and rents it out to other conferences for their own constituency meetings.

Title Image: Adventist Church Undersecretary Myron Iseminger holds a remote voting device that will be used at General Conference Session in July. Gone are the yellow voting cards that were used in past Sessions. [photo: Ansel Oliver]

This article from the Adventist News Network was written by Ansel Oliver, former ANN News Editor.