On Martin Luther King Jr. weekend, Dwight Nelson preached a sermon calling for the unification of the Adventist Church and the removal of racial dividing lines. His sermon elicited a wide range of responses, many of them critical of his perceived call to eradicate ethnic conferences.

Along with the sermon came a petition sponsored by the Pioneer Memorial Church directed at the North American Division. The petition, originally entitled "Let's End Ethnically Separate Conferences," was renamed "Let's Unite in Christ." As of this article's publication, it has garnered 1,504 signatures.

What this will look like, perhaps nobody but God knows—but couldn’t we trust the vision that is in His heart?

Where we have wronged each other, let us repent—where we have been wronged, let us forgive. Both repentance and forgiveness precipitated the Holy Spirit’s outpouring in Acts 2—they must precede His outpouring today. Only as we are in Christ can God “do a new thing.”

The flyer for the "Are We Still Relevant?" meeting promises "a candid discussion about regional conferences" with some of the key players in the discussion present together. 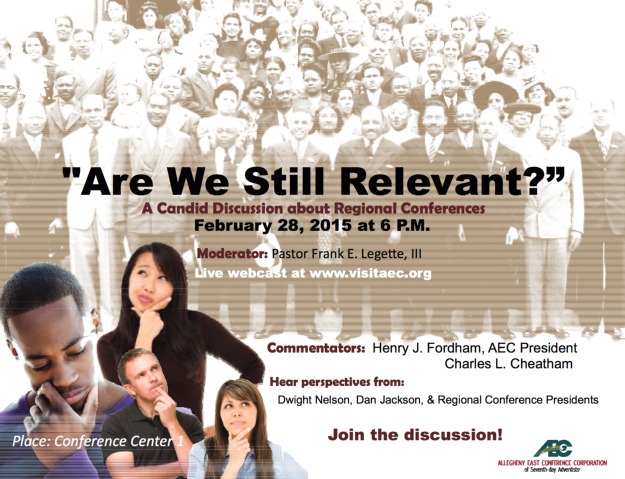 The event takes place on Saturday, February 28 at 6:00pm in the Allegheny East Conference Center 1. It can also be viewed online at www.visitaec.org.