Jesus' Manifesto on the Mountain Challenges and Inspires ONE Project Participants “We say Jesus, you are Lord of all.”
--song from the One Project

On day one of the One Project conference, the felt need the speakers seemed to address was Adventism’s need for deeper unity—the need for safety and mutual generosity that could liberate the church for a more expansive mission to the world.

Another “gathering” of the One Project has brought some 1,000 Adventists to a San Diego hotel and convention center for 36 hours of Jesus-focused preaching and conversation—and not a little prayer and song.  The enthusiasm of participants—hospital and college presidents, pastors and lay leaders, some from as far away as Norway and New Zealand—was as palpable as San Diego sunshine.  “This is so rejuvenating,” said one young professional who allowed that he had been having “troubles with Adventism and with religion in general.”   Said another, repeatedly, “This gives me hope.”

Sunday at 8:30 a.m. the music began.  A new song--with the repeated affirmation, “We say Jesus, you are Lord of all”—rang out along with others as a prelude to each segment of short homilies based on the Sermon on the Mount.  Arranged around tables, participants heard commentaries at once good-humored and unflinching on the divine call to bear Christ’s image.

Randy Roberts, pastor of the Loma Linda University Church, began, so he put it, “at the end,” with Matthew’s remark (in 7:28) that having heard Jesus the crowds were “amazed” at his “teaching” and “authority.”  This could only have happened, Roberts said, if listeners had felt his words touch precisely on what they themselves were feeling and living.  What Christ “spoke” back then could “speak” today—a goal, he said, for any preacher, and the rightful expectation of any Christian gathering.

Japhet De Oliveira, pastor of the Boulder, Colorado, Adventist Church, spoke on the Beatitudes. To be “pure in heart,” he said, is to be “a vulnerable church.”  To generate peace is to be a “safe church,” and so to live together in “unity without oppression.” Chris Oberg, pastor of the La Sierra University Church, followed with an interpretation of the “twin metaphors” of salt and light.  Referring to a recent Christianity Today headline that spoke of the burgeoning Adventist Church as “separatist,” she exclaimed that we “need a better headline.”  The point is not “saltless salt” or “invisible light.”  Jesus’ “manifesto on the mountain” calls for a new conversation about “remnant identity,” one that will turn us into people who “set a table for everyone.”

Following the “Recalibrate” feature—a break for facilitated table talk—participants took 25 minutes off.  Then, summoned by song, they re-assembled. Alex Bryan, pastor of the Walla Walla University Church, said that Jesus’ message of the Kingdom of Heaven toppled scribal and Pharisaic expectation.  Jesus would not overthrow the enemy by violence, but suffer crucifixion himself; he would not build a physical temple but create a “house of prayer for all people.”

Tim Gillespie, pastor of the Crosswalk Church in Southern California, commenced discussion of the “you have heard but I say” section of Jesus’ Sermon.  “Extrinsic legalism” misses the point, he said.  The “heart” is the key to recovering the “deep unity” Jesus imagines for his followers.  The frame of mine that produces insults and hostility is unworthy of a community called to reconciliation.  “How much fear,” he asked rhetorically, “exists in our church due to simple disagreements?”  The “arrogance of being right” must give way to the communion table.

Ivan Williams, the North American Division Ministerial Director, took on Jesus’ remarks about lust, adultery and divorce, calling participants to “sexual exclusivity and sacred trust.”  The “gospel of my preference” is no gospel of Jesus, who declares in effect: “You have heard one thing, but I declare a new thing.”  A “Recalibrate” session followed, then a welcome and a prayer of blessing from Southeastern California conference president Sandy Roberts.  Her gracious words, and perhaps also her singular presence—no other woman occupies such a role in Adventist leadership—drew a standing ovation.  The lunch break began and lasted until 2:30 p.m.

As the afternoon session began, Laurence Turner, an Old Testament scholar from Newbold College, preached on the “no oaths, just Yes and No” remarks of Jesus.  Oath-taking in his day could be twisted into an excuse for lies, Turner said.  Jesus forbade all efforts to “wriggle out of responsibility for integrity.”  Lose the “weasel words,” Turner put it, so you can be trusted.  And swear off character assassination, too.  Imitating Jesus means being a people of “transparent integrity.”

John McVay, president of Walla Walla University, addressed the wisdom of Matthew 5:38-48.  Here Jesus repudiates “proportional retribution” and sets forth the most difficult of all standards, that of love even for the enemy.  On these things “we must hear Jesus,” not explain him away, said McVay.  His is a call to “amazing generosity.”  But if it is the “scandal of the new lawgiver, Jesus,” it is also a message of God’s own grace: what God asks of us, God does for us, sending rain and bestowing love whether it is deserved or not.

Show conviction, don’t seek applause.  Sam Leonor, pastor to students and faculty of La Sierra University, took this as the sense of Jesus’ warnings about practicing piety “before men.”  Self-forgetful generosity and simple praying—after the example of Jesus—both please God and bring meaning, joy and satisfaction.  Emily Whitney, a graduate student now and formerly pastor for spiritual development at Walla Walla University Church, followed with reflections on money and the management of God’s resources.  The God we love with all our hearts asks us to be “all in”—to put our treasure where it counts for most, not where moth and rust consume and thieves break in to steal. 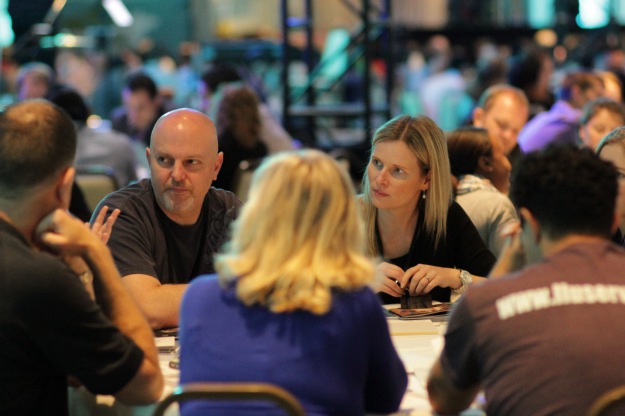 Adventists of the sort who come to One Project events think often of the shortfalls of their community and so find great energy and solace in inspiring words and gracious fellowship.  Hope sprang alive on Sunday, or so it seemed.  But if hearts were uplifted, they were challenged, too.  This year’s theme tells of the grace so many yearn for, but it also calls those who hear to humility and obedience.  At the end of the day, after one last opportunity to “Recalibrate,” Jonathan Duffy, president of ADRA International, told participants that the call of God is a call to “change society.”  Words are no substitute for action.  Prayer is no veil to hide behind.  In defense of his point Duffy invoked Ellen White, Tony Campolo and Adventist World War II hero John Weidner.  He said, too, that Jesus made good news for the poor, the blind and the lame the criterion of his movement’s authenticity.  We may wonder, Duffy added, why God allows poverty and injustice, but the better question may be this: Why do we?

Earlier, someone had quoted Dietrich Bonhoeffer.  Here in San Diego, it seemed that Adventists were echoing, or at least considering, this modern saint’s refusal of “cheap grace.”

Read the report on day two of the San Diego One Project gathering here.

Charles Scriven served as president of Kettering College from 2001-2013, and is board chair of Spectrum and Adventist Forum.