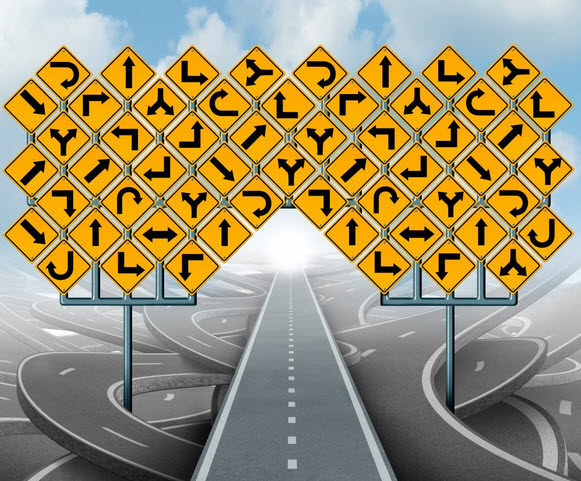 Life is complicated and we cannot handle too much – especially complexity that is not essential in our day-to-day activities. Thus we quickly and often subconsciously search for the minimum complexity necessary to navigate daily life so we are not paralyzed in decision making. In so doing, we remember and catalogue past evaluations so we don’t have to repeat the laborious process each time we encounter sufficiently similar situations. On subsequent occasions we typically do just enough recall and analysis to decide “this is like that” and, if we once successfully determined how to handle “that”, we’ll just repeat the same approach now for “this”.

Such simplification is almost mandatory for life navigation. And we achieve this reduction in various ways. One technique is the use of “models” in our thinking and problem solving. We strip away complexity, trying to retain the essential components, while removing the “noise”. Another is to defer to authority. We extend the range of our experience by leveraging the work and reasoning of people and groups we have confidence in.

Thus smoothly and validly navigating the multitude of choices and situations in modernity involves the delicate balancing act of “dumbing down” each situation as far as it legitimately should be simplified, but no farther. Otherwise there is a risk of making a poor decision – and worse – filing away the initial decision and repeating the error multiple times because we fail to recognize a need for re-evaluation. People resist such overhead for various reasons so initial wrong turns, once made, can be difficult to correct. But having enough information and using valid reasoning to get the autopilot-formula creation exercise right, is in itself complicated.

In addition to the reality that some things in life are complex, not everyone has the same amount of tolerance for complexity and ambiguity. And if we don’t realize that we have been creating simplifying models all along the world can appear to actually be a simpler place than it is. That is comforting, but delusional. When something novel occurs a frequent human strategy is to force-fit it into some of one’s previously derived life rules. For many, complexity aversion is significant, and we risk hammering situational “round pegs” into paradigmatic “square holes”.

“I don't even know what an ETF is. But I would never get into the stock market. It's one big gamblin…”

Here the writer announces lack of literacy on the subject (an ETF is a very basic investment vehicle), then immediately makes a sweeping pronouncement about the subject as a whole. I don’t mean to pick on this individual (who will remain anonymous) but likely we can all recognize this sort of opinion formation – endemic in our world. People taking minimal data, simplifying it into a rule, (likely based on questionable, even unrelated criteria), jumping to a sweeping conclusion, then cataloguing it for future reference. And, with a sweeping rule confidently put into place, the likelihood of later re-evaluation is somewhat diminished. Now, in this example, minimal harm is done. No one is going to be convinced by such a statement although someone’s existing preconception might be slightly reinforced by it. However, there are areas where unrecognized complexity and accompanying aversion can cause serious damage. And one such arena is in a religious community’s doctrinal dialog.

Consider the following hypothetical dilemma. One of Adventism’s ongoing dialogs is how to interpret Ellen White’s writing. Suppose one takes a very expansive position – Ellen White’s writings are to be considered as normative as the Bible. The question remains: how ought one to act in response to the messages? Here are some categorical Ellen White statements on temperance[1]:

·“For a time after the great earthquake along the coast of California, the authorities in San Francisco and in some of the smaller cities and towns ordered the closing of all liquor saloons. So marked were the effects of this strictly enforced ordinance, that the attention of thinking men throughout America, and notably on the Pacific Coast, was directed to the advantages that would result from a permanent closing of all saloons. During many weeks following the earthquake in San Francisco, very little drunkenness was seen. No intoxicating drinks were sold. The disorganized and unsettled state of affairs gave the city officials reason to expect an abnormal increase of disorder and crime, and they were greatly surprised to find the opposite true. Those from whom was expected much trouble, gave but little. This remarkable freedom from violence and crime was traceable largely to the disuse of intoxicants.” – Temperance,p 26.

·“Because of the wickedness that follows largely as the result of the use of liquor, the judgments of God are falling upon our earth today.” Temperance,P 27.

·“Lawmakers and liquor dealers may wash their hands as did Pilate, but they will not be clean from the blood of souls.” Temperance,P 28.

A more exhaustive quote mining effort would easily add to this small sample. Now, would you conclude from this that Ellen White would have supported Prohibition in the U.S.? Would you – if you were an Adventist in 1919 and held a “high” view of EGW’s inspiration – have been a supporter of the Volstead Act, which instituted that social experiment? And, ought a modern Adventist, with the same view of inspiration, support any modern effort to institute similar laws in their particular country?

Of course, there is almost surely not going to be any revival of Prohibition – anywhere. Why? Because history has shown clearly that it had serious unintended consequences. Organized crime arose to control liquor distribution, people typically ignored the law if possible and collectively this reduced the moral suasion of law generally. And, by 1929, it was estimated that more liquor was being consumed in America than before the law went into effect. I wonder how Ellen White would have evaluated the whole history, had she lived it out. A simple principle, illustrated by San Francisco’s experience, applied in a more sweeping and complex context – then delivered quite problematic results.

As for us, how far ought we to take inspired statements in practice? People understandably want such counsel to be normative. But the correct application of even the most apparently obvious normative statement is not always so simple in real life, except in hindsight.

Now my above example needs to be understood merely as illustrative of a broad principle. We ought not to be side-tracked on concerns about Ellen White’s inspiration, liquor consumption or other Adventist doctrinal issues. This is a generic question that any believer faces in transitioning from a given inspired counsel – articulated in time, place and culture – to an application in one’s personal life and present social context.

There are many religious issues where one of the points of conflict is the degree of complexity admitted into consideration. Three of the most frequently discussed on this website are: homosexuality, the age of the earth and women’s ordination. One of the apparent divides in each of these subjects is also the degree of complexity allowed for consideration. And one needs to recognize that admitting too much (and thus possibly inconsequential) complexity is potentially just as fraught with difficulty as admitting too little.

Consider homosexuality. The texts always referenced are uniformly negative. But does their prohibitive scope actually apply to everything moderns attach the label of homosexuality to? Might the Bible be silent on some sub-categories? How ought we to understand any possible silence? Must prohibition of a subset necessarily get extended to the full range of possibilities or should silence be examined case by case? I find that often when potentially extenuating circumstances are brought up for consideration, many people are adverse to even allow for the possibility that there might be legitimate alternatives to a simpler, albeit sweeping, conclusion.

One of the potential values of Spectrum – as a place where Adventism is re-evaluated and the margins are tested – is a meta dialog about whether and how much complexity is appropriate for a God-honoring perspective and corresponding template for personal ethics. But one of the many difficulties we also have in the church is an aversion to giving complexity due diligence.

Rich Hannon is the Spectrum website Columns Editor and a member of the Association of Adventist Forums board.