Happy New Year Through Music from The Spectrum Staff 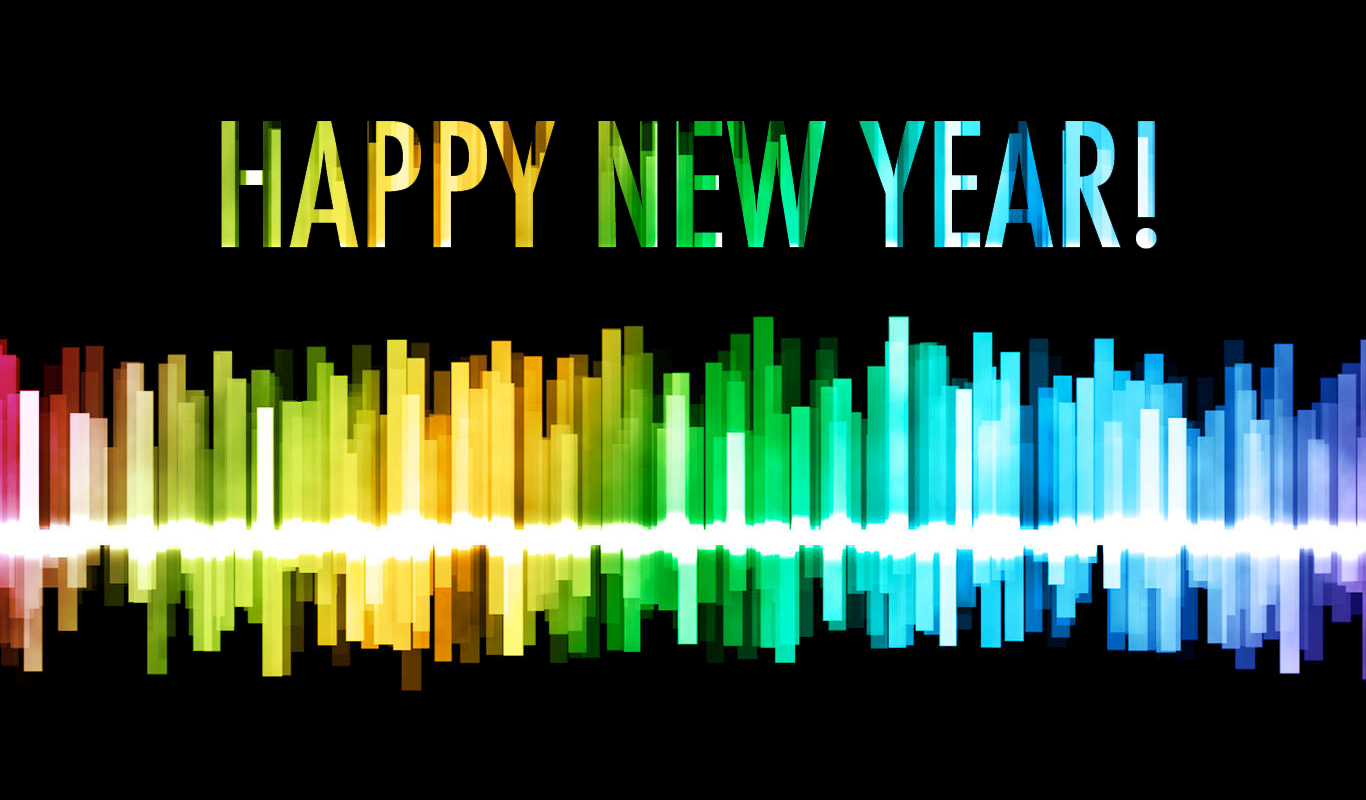 As a way of ringing in this New Year, Spectrum staff members offer their picks for songs that took on special meaning for them during 2014. The songs come from genres as varied as the staff members themselves, from classical to pop, and from lullabies to slam poetry set to music. We offer these songs as a small glimpse into who we are, and as a way of commemorating moments small and large that moved us in some way during this year. If you have a song that was especially meaningful for you this year, please share it in the comments! Happy New Year, from all the staff at Spectrum Magazine. Here's to the year gone by and the year to come!

Alita Byrd, Interviews Editor
It’s so hard to choose just one song that was meaningful to me this year — music is such a big part of life, and different songs are important in different ways. While out for a run, I especially enjoyed listening to Imagine Dragons ("Top of the World"), Hozier ("Take Me To Church") and Bastille ("Pompeii"). I like the catchy radio tunes! At home, it’s been mostly Christmas music recently (my favorite is the O Jesus Sweet Christmas album recorded by the Columbia Union Collegiate Chorale when I was a student). If I’m putting a song on our big stereo, the ultimate is Rachmaninov’s Piano Concerto No. 2. I don’t have the chance to go to many concerts these days as I have three little kids with short attention spans to look after. This also means that most of the time in the car the stereo is playing a kids’ music CD. At least they are now old enough to appreciate Peter and the Wolf and Beethoven Lives Upstairs — not that I don’t find Sesame Street’s Greatest Hits very clever, but some of those monsters can barely sing in tune! I have taken my kids to all of the Music Together classes, and the repertoire is wonderful and varied. It was Music Together that first introduced me to Raisins and Almonds, an old Yiddish lullaby. I have sung that a lot this year to my 23-month-old daughter as I am putting her to bed. (“Sing, mama, sing,” she commands. Or sometimes: “Stop singing!”) It has a wonderful chord progression and the kind of haunting melody in a minor key that we associate with traditional Hebrew music. So that is the song I will pick for the most meaningful song of 2014 for me. The words are also unusual:

“To my little one’s cradle in the night
Comes a little goat snowy and white
The goat will trot to the market
While mother her watch does keep
Bringing back raisins and almonds
Sleep my little one, sleep.”

I won’t be able to rock my baby before putting her down to sleep for much longer. Her soft cheek and sticky hair and arm thrown around my neck make me feel at peace, and deeply content.

Joelle Chase, Spirituality Editor (Outgoing)
The last few years have taken me to new places in understanding the old, familiar Christian language. Kathleen Norris' excellent book, "Amazing Grace: A Vocabulary of Faith," gave fresh meaning to words like judgment and salvation. Norris writes: "... in order to have an adult faith, most of us have to outgrow and unlearn much of what we were taught about religion.” And what I'm unlearning is that words are static, solid. Quite the contrary! Words are fluid. They change with circumstance, culture, time, and context.  As lovely and useful as words are, they pale compared to reality and lived relationship with each other, with earth, with God. Richard Rohr says that "all words are metaphors approximating the hard-knock of reality itself." That's why the Word became flesh. I love how Florence and the Machine have put this confounding mystery into poetry and music in the song "All This and Heaven Too."

I keep playing with words, reinterpreting and rearranging, discovering deeper meaning to the text I've been using my whole life. I'm finding that where wordiness ends and silence begins I catch a glimpse of what these words mean. Like fingers pointing to the moon, they describe and invite my experience of reality itself which can only be met in the moment, wordlessly, intimately.

Pam Dietrich, News Headlines
According to Wikipedia, Mark Lowry wrote the lyrics to the song "Mary, Did You Know?" when asked to write a script for a church Christmas play in 1984. He wrote a series of questions that he would like to ask Mary, the mother of Jesus. Twelve years after Lowry wrote the lyrics, musician/songwriter Buddy Greene wrote the music to the song. I do not know the year I first heard the song, but I do remember that Marvin Ponder sang it, accompanied by an acoustical guitar.  I was very moved by the lyrics.  The line that continues to resonate with me is "When you kiss your little baby, you have kissed the face of God."  In all the years that I have seen art depicting the infant Christ in the arms of his mother, I had not recognized the irony of that one line.  It continues to confound me every time I hear the song.  This year I was touched by the piece again through the performance by the a cappella group Pentatonix.  The group's interpretation is reverent, using a cave-like setting perhaps similar to the one into which Christ may have been born.

Bonnie Dwyer, Editor
The evening began with Messiaen’s “Quartet for the End of the World”, and YoYo Ma inviting the audience to close their eyes and use their imagination while listening to the soulful sound of cello and piano. But what I remember most about the evening was what Mr. Ma had to say about the creation of music and how the magic is not in perfect technique but in capturing the emotion of a piece. That is what led him to talking about openness. Openness to the moment in performance, openness to new ways of understanding and exploring known concepts. When he read Albert Schweitzer’s comment that Bach is a pictorial composer, it challenged him to rethink Bach.

Ma’s early success in life as a performer has challenged him to look for ways to maintain the child-like wonder that is the key to performance. Born in Paris to Chinese parents, he spent his schooling years in New York City and was a child prodigy, performing from the age of five. He graduated from Juilliard School and Harvard University and has enjoyed a prolific career as both a soloist performing with orchestras around the world and a recording artist. His 75 albums have received 15 Grammy Awards. The key to that magical wonder, he said is openness. “Openness is a muscle. Use it or lose it.” Now the sound of the cello reminds me to remain open to new music, ideas, and people. It is a truly beautiful sound.

Steve Hergert, Webmaster (Incoming)
I found this to be a thoughtful and inspiring piece. It encouraged me this year with its strong message: Shine! Show your passions for the world to see!

Rachel Logan, Writing Intern
It is so easy to get caught up in the spin of this world–working hard to be the best and to gain approval from those around us. The song "Try" by Colbie Caillat is really special because it reminds me that we don't need to try so hard to make people like and respect us. The song is about being happy with oneself and not feeling that, as a woman, there's a need to be dressed up and made-up to be beautiful. It seems that a lot of young women feel the need to wear shotr skirts and heavy makeup because society tells them that's what they need to do to be loved and desired. This song reminds women and girls they don't need to follow those standards. It resonates with me on that level.

Alisa Williams, Spirituality Editor (Incoming)
One could debate at length about what the metaphors laced throughout “The Hanging Tree” truly mean. To me, the song feels very symbolic after all that has happened in America, and the world, this past year. The song speaks of a man who has been sentenced to die, perhaps unjustly, in the hanging tree. The singer tells of strange things that happened here, and I can’t help but think that “strange” is a good word for how the world feels right now. Where young men of color have met untimely deaths at the hands of those sworn to protect, where so many rise up against marriage equality in the name of God, where women around the world continue to face oppression and violence simply because they are women. The song asks the listener to meet at midnight at the hanging tree, and I think of being under this tree, shadowed by the memories contained within its branches, with darkness pressing in. Being in this world, surrounded by everything that has happened here and all that it means, brings with it a mix of hope and hopelessness, the fear and the freedom that come with change, and the desire to push ever-forward, into the dawn that follows the dark of midnight.

Jared Wright, Managing Editor
My son had his first birthday this year, and we celebrated by throwing a party with an ecclectic collection (read "from various stages of our lives") of our friends and family, many of whom have kids themselves. I played the role of DJ Dad at the party, and since it was an ocean-themed party in honor of our little boy's love of the bathtub (close enough), I made a playlist of ocean- and beach-themed music. The playlist included the Beatles' "Yellow Submarine" and "Octapus's Garden" along with "Horatio the Penguin" from the film "Happy Feet" and "The Pirates Who Don't Do Anything" from Veggie Tales. But my favorite was Raffi's "Baby Beluga." Raffi is an Egyptian-Canadian, self-described "Children's Troubadour" who has been singing songs for kids since my own childhood. "Baby Beluga" is a beautiful song of friendship and family against a deeply ecologically-conscious backdrop—pure Raffi, and a perfect birthday tribute to my own little beluga baby.

Eliana Zacarias, Writing Intern
The song which defined this year for me was "Happy" by Pharrell Williams, which actually surprised me since Pharrell is not my usual thing--give me David Bowie and Radiohead any other day. I use music to set the tone for the day and to help me cope with the more difficult moments of life. This usually results in too many playlists to count for oddly specific moods. So I began to think about the most difficult moments of this last year. The first thing that came to mind was the last two quarters of my senior year in college working on my two thesis projects. I remember in the midst of this huge task I called my sister in despair confiding in her my fear of not being able to finish both, waking up everyday paralyzed with anxiety. What she suggested changed everything for me--she told me to wake up early, everyday, put on a positive song, dress up for myself, and get to work. Along with this regimen she suggested the song "Happy" since it repeats the word happy enough for me to convince myself that I was happy waking up at 7 AM when my class didn't start until 11 AM.  "Happy" was my mantra this year--even when I couldn't play on my ipod I'd sing it in my head to keep me going. I did what my sister suggested for the last six months of my senior year and some how I got through with my Bachelors degree at the end.