BRI Sounds Off on Women's Ordination, Polygamy and "Trangenderism"

BRI Sounds Off on Women's Ordination, Polygamy and "Trangenderism" 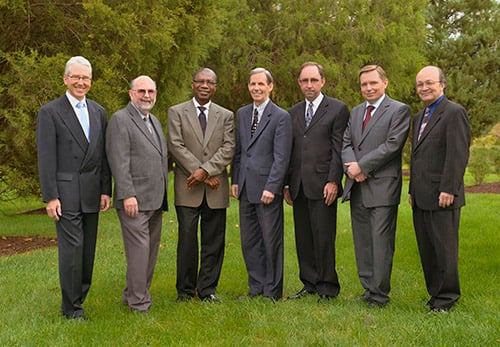 The Biblical Research Institute, the scholarly arm of the General Conference of Seventh-day Adventists, has issued statements on Women's Ordination, Marriage and Sexuality, and "Transgenderism" in the 49th issue of the BRI Newsletter, dated January 2015.

The newsletter's first article, authored by BRI Deputy Director Ekkehardt Mueller, sounds a cautionary note about potential fallout from the current debate over women's ordination in the Seventh-day Adventist Church. Mueller notes that as an official entity of the Church, the BRI has not taken a position on the issue either in favor of or opposed to women's ordination. But Mueller, speaking for the BRI, admonishes readers about potential repercussions. He writes:

The BRI is quite concerned about some fallouts of the current debate. It seems that after the Theology of Ordination Committee (TOSC) finished its work, the dispute reached a new level that, in our opinion, is detrimental to the Church and to church members—that is, those directly affected and those listening to the debate. We have the impression that the discussion is no longer on a biblical-theological and factual level but that individuals and groups are being heavily criticized and condemned by others. In theology we refer to these as ad hominem arguments.

Ad hominem arguments, Mueller warns, hurt people, create hostility, destroy trust, and hinder cooperation. "In the end we may have a split within the Church—if not visible, then invisible," Mueller writes. "This may hinder the unity and mission of the Church for years to come."

Mueller also worries about how the debate will look to outsiders.

Non-Adventist observers of the debate may be appalled by what they see happening in Adventist circles and what they read on the Internet. Thus the debate may have negative effects on the Church’s outreach and on its reputation in the general public.

There may be fallout for church members too—specifically young people, Mueller says. He notes that "[t]he ordination debate has nothing to do with the Bible’s most fundamental teachings. It does not belong to the core of Adventist beliefs." And when churchgoers see acrimonious debate over a non-core issue, it might raise questions about the Church itself, Mueller points out. Mueller lists a fourth potential problem, that of erosion of confidence in the Bible because people on both sides of the issue use Scripture to prop up their arguments.

It is perplexing, especially for young people, to see people who hold a high view of Scripture come to different results. As a result, they may conclude that the Bible is irrelevant to some or all issues that we face today, and that the Church has failed to articulate a methodology that brings us all to the same conclusions.

Mueller suggests that participants in the debate over women's ordination should be very cautious, and should stop rhetoric that hurts others.

The book of Genesis functions as the theological and philosophical introduction to the Bible. Genesis 1–4 gives the philosophical definitions for God, man, and the nature of reality used by the rest of Scripture.
. . .
Genesis 1–2 says that because it was not good for humans to live alone, God created a corresponding partner of a differing gender, so that in marriage a male and a female would become “one flesh.”

Bauer then lists several "distortions" of the Genesis ideal: polygamy, voyeurism, homoeroticism, rape, prostitution, and adultery. Bauer describes polygamy as a sort of gateway drug to other distortions, saying, "Polygyny appears to have been a tipping point that opened the way for more daring deviations in the future." Voyeurism, Bauer contends, was Ham's sin in Genesis 9, in which he looks upon his naked father, Noah. "Ham was playing the voyeur, turning the situation in to a live peep-show," Bauer argues. God designed sex to be "a private act between husband and wife, and not a public spectacle for voyeuristic pleasure," Bauer says.

Bauer says homosexuality (here, male-male sex acts) was the sin of Sodom in Genesis 19, a sin greater than the rape of Lot's daughters. "Certain- ly, Lot’s reaction to homoerotic sexuality is relevant to the contemporary discussion of gay and lesbian rights in Western culture," Bauer writes.

The story in Genesis 34 is about the rape of Dinah, Bauer suggests. Unless it was consensual. "If Dinah’s involvement was consensual, we would then be introducing the issues of pre-marital and extra-marital sex, which are again highly relevant issues for current society."

Genesis 38 depicts Tamar's act of prostitution, which was another deviation from the Edenic ideal, Bauer argues. "It appears that such an exploitive affair was normal in those times," Bauer says. In Genesis 39, Potiphar's wife demonstrates the pitfalls of adultery and non-consensual sex. Bauer asks, "How many date rapes occur because one does not respect the other’s expressed refusal? The themes and issues in this story are certainly areas with which twenty-first century citizens can identify," he says.

Bauer concludes by proposing the Genesis View of sexuality's purpose:

The entire Genesis record reveals that God’s primary purpose for sexual expression is not for personal pleasure or to get a baby to prop your psyche. Furthermore, sex is not meant to be a tool to manipulate others or a means to exploit or wield power over another. The primary purpose for sexual expression, highlighted by Joseph, is to create and foster a sense of uniqueness, exclusivity, and specialness between a husband and wife in their marriage.

Below Bauer, the newsletter provides an official statement from the Biblical Research Institute on "Transgenderism," a term that does not appear often in scholarly literature, but has gained traction primarily in religious writing. The statement notes that the issue has generated several inquiries because transgender persons have accepted Jesus Christ and have joined the Seventh-day Adventist Church. The statement starts with a call for compassion. "Oftentimes the affected persons have suffered emotionally and spiritually because of their feelings of gender incongruity and rejection by others. So they need all our love and respect." But the article immediately adds a "however," stating that if marriage is up for debate, the Bible's teachings on marriage should be considered.

The Bible, the statement says, teaches that marriage is between one man and one woman. "[M]arriage between a non-transgender male and a transgender male or between a non-transgender female and a transgender female would be understood as a homosexual relationship, prohibited by Scripture," the statement says. The BRI contends that as far as gender-reassignment surgery is concerned, "Such behavior appears to be a sophisticated form of homosexual behavior that would also militate against the biblical perspective of homosexuality."

The statement concludes that transgender indivuduals should not marry.

For these reasons we strongly caution transgender people against a transgender getting married. However, even if the Church would not approve of a couple’s choice to marry, the local pastor should still minister to those entrusted to his care.

Concerning the appropriateness of gender-reassignment or "sex-change" surgery, as the BRI describes it, the article offers the following:

While the struggles and challenges of those identifying as transgender have some elements in common with the struggles of all human beings, we recognize the uniqueness of their existential situation and the limitation of our knowledge in such issues.

Secondarily, however, Scripture must provide guidance, and Scripture states that human beings are a psychosomatically unified, meaning that sexual identity is not independant from one's body, God is the author of our gender, and we are all corrupted by sin. Our feelings do not always reflect accurately God's ideals and truth. Humans are not created to be disunified, and so, "[s]ince surgery does not solve the situation, a person is more likely to find wholeness and healing by learning to live with his or her sexual condition of a real or perceived dichotomy in sexual identity while leaning on the Lord for constant help."

The BRI strongly cautions against gender-reassignment surgery, calling it "radical" and "irreversible," and calls on pastors and church members to "demonstrate care and regard toward those who struggle with this challenging issue."

1. "Should individuals seek to use sex-change surgery as a way of circumventing biblical principles addressing human sexuality and the proper way to satisfy such desires, they would be acting against God’s revealed will. The Church must remain loyal to its commitment to the will of the risen Lord as revealed in the Scriptures and therefore display love for all."

2. "[W]e do not deny church membership to persons who have undergone sex-change surgery but are committed to the Lord and His will."