Our goal is to foster community through conversation. This website is the online companion to Spectrum, a quarterly journal established in 1969 to encourage Seventh-day Adventist participation in the discussion of contemporary issues from a Christian viewpoint, to look without prejudice at all sides of a subject, to evaluate the merits of diverse views, and to foster intellectual and cultural growth.

Spectrum is an independent journal published since 1969 by the Adventist Forum. Spectrum is edited by Alexander Carpenter.

The Spectrum website is regularly updated with news, columns, spiritual reflections, Sabbath School commentary, and interviews. Since we launched, we have had several million page views each year and each day thousands of visits come from all corners of the globe. Alex Aamodt serves as the editor for the website and can be reached at alex.aamodt@spectrummagazine.org.

Alexander Carpenter, Executive Editor. A John Nevins Andrews Scholar with majors in Religion and English Literature, Alexander graduated summa cum laude from Andrews University. He did graduate work in visual culture, historiography, critical theory, and religion at the University of California and the Graduate Theological Union in Berkeley, CA. Alexander has done a fellowship at the Center for American Progress in Washington, DC, and he recently received a certificate in non-profit management from Cornell University. Alexander has taught both full-time and as an adjunct professor in the visual arts department and honors program at Pacific Union College since 2008. Born in Glendale, CA, now living in Northern California, Alexander enjoys snowboarding, golf, world travel, museums, music, nature, and almost all things Adventism.

Alex Aamodt is the Managing Digital Editor of SpectrumMagazine.org and the Roy Branson Investigative Reporter for Spectrum. Born and raised in the Northwest U.S., he earned degrees in English and Spanish from Walla Walla University and is now based in Portland, Oregon.

Alita Byrd has been writing for Spectrum since 1995 when she was a journalism and English student at Columbia Union College (now Washington Adventist University) in Washington, D.C. Alita earned a master’s degree in history of international relations from the London School of Economics in 2001 and worked as a writer for magazines in the U.S., Europe, and South Africa. She is currently based in Santiago, Chile, where she lives with her husband and four children. She is Spectrum's Interviews Editor.

Pam Dietrich aggregates news stories about Adventists and Adventist institutions from general media sites. She completed a B.A. in English at Walla Walla College and an M.A. in English through Loma Linda University at the La Sierra campus. Pam began teaching high school English at Loma Linda Academy in 1976. After 26 years, she transitioned from teaching to serving as the LLA 7-12 librarian until 2010. Pam lives in Yucaipa, California, near her adult son.

Rich Hannon edits the Columns section of the Spectrum website. He is a retired software engineer with interests in philosophy, comparative religion, history, and finance. He also assists in the technical side of the website. Rich graduated from Andrews University and Michigan State University. He is married with three children and lives in Utah.

Steve Hergert works as the Webmaster for Spectrum Magazine. Born and raised in Loma Linda, California, he enjoys tinkering with various small electronics projects, and is the proud owner of three cats.

Fonda Seifert is the associate editor for the Spectrum website who steps in with support on the weekends primarily. Since completing a degree in Communications/Journalism from Andrews University, she has worked in communications, public relations, and marketing for non-profit and for-profit organizations and served as writer and editor for everything from weekly e-newsletters to quarterly fundraising publications.

Our Writers: We’d also like to express our sincere appreciation for the many, many writers who have generously contributed their eloquent thoughts and ideas over the years. Their voices have made Spectrum an invaluable resource for independent Adventist news and expression for over 50 years.

The Mission of Adventist Forum:

Adventist Forum is a fully independent advocate of SDA renewal that is beholden to readers but not to any official administrative structure. The point is to challenge apathy and to advance Adventist faithfulness and mission. The work of Adventist Forum is fluid—reminding people to attend to that which is timely—rumbles, fractures, trends, creations, powers, alliances, losses—as well as that which is transcendent and timeless.

Continuing the Conversation: Spectrum, Forum Chapters, and the Annual Meeting

In addition to the Spectrum journal, the Adventist Forum hosts the Spectrum website, sponsors an annual meeting, and forms a confederation of local chapters to strengthen conversation.

Our efforts are supported by our members, donors, and friends. The need for love within the Adventist community has never been greater. We invite your participation by becoming involved as a member of Adventist Forum.

The History of Adventist Forum:

During the uproar of the 1960s the younger generation questioned everything. It focused its attention on such major issues as the Vietnam War, civil rights, traditional morality, and ecology. Patriotism, rules, and values were no longer taken for granted. Seventh-day Adventist students were no exception. As more and more church members began to attend non-Adventist universities and colleges they applied critical thinking learned in their studies to other topics — including their church's beliefs and practices — that meant much to them. Many Adventist graduate students and other like-minded individuals began to meet in groups for discussion and fellowship. These groups were the forerunners of local Forum chapters that meet today throughout the world. In time, these diverse discussion groups came together under the umbrella of the Association of Adventist Forums (AAF). In 1968, the General Conference of Seventh-day Adventists officially endorsed the association in the Adventist Review. The organization is currently known as Adventist Forum (AF).

Board and Leadership Team Set Big New Goals in 2021

After more than 50 years of groundbreaking work, there is still much we want to do. We are excited about moving to the next level of conversations, independent reporting, analyses, partnerships, and events. Our new Strategic Plan outlines an array of ambitious initiatives for the next few years to broaden our scope of interest, forms of impact, and demographic reach. Here is our Strategic Plan.

To provide the financial resources necessary to move boldly forward with the new plans, we are launching a $1 million Grow the Vision fundraising campaign. We are inviting members of our Spectrum family to make a campaign commitment which can be paid over three years to ensure sufficient resources to fully execute the timely and inspiring goals. Learn more about our Grow the Vision campaign here.

Adventist Forum Board of Directors: 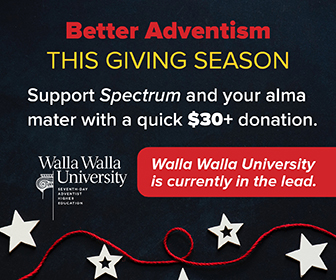